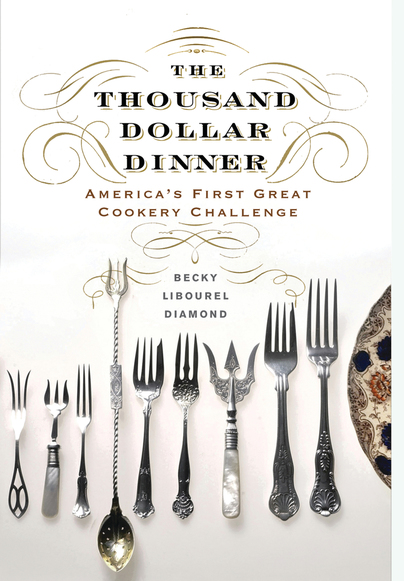 An interesting article written by the author, 4 Outrageously Expensive Dinners Of The Past.

You'll be £19.99 closer to your next £10.00 credit when you purchase The Thousand Dollar Dinner. What's this?
+£4.50 UK Delivery or free UK delivery if order is over £35
(click here for international delivery rates)

In 1851, fifteen wealthy New Yorkers wanted to show a group of Philadelphia friends just how impressive a meal could be and took them to Delmonico’s, New York’s finest restaurant. They asked Lorenzo Delmonico to “astonish our Quaker City friends with the sumptuousness of our feast,” and assured him that money was no object, as the honor of New York was at stake. They were treated to a magnificent banquet, enjoyed by all. However, not to be outdone, the Philadelphia men invited the New Yorkers to a meal prepared by James W. Parkinson in their city. In what became known as the “Thousand Dollar Dinner,” Parkinson successfully rose to the challenge, creating a seventeen-course extravaganza featuring fresh salmon, baked rock fish, braised pigeon, turtle steaks, spring lamb, out-of-season fruits and vegetables, and desserts, all paired with rare wines and liquors. Midway through the twelve-hour meal, the New Yorkers declared Philadelphia the winner of their competition, and at several times stood in ovation to acknowledge the chef ’s mastery. In The Thousand Dollar Dinner: America’s First Great Cookery Challenge,research historian Becky Libourel Diamond presents the entire seventeen-course meal, course by course, explaining each dish and its history. A gastronomic turning point, Parkinson’s luxurious meal helped launch the era of grand banquets of the gilded age and established a new level of American culinary art to rival those of Europe.

This richly detailed chronicle showcases the fantastic dining experience concocted in 1851 by Philadelphia chef James W. Parkinson in response to a challenge from 15 wealthy New Yorkers who claimed their city produced the best meals.
Diamond adds another layer of richness to her account by weaving in the history of the various foods and the array of utensils, touching on soup’s 5,000-year-old history and heralding “the invention of leak-free containers which could withstand boiling over an open fire.” This tale of a Gilded Age mega-meal will delight culinary historians and anyone wanting a peek at over-the-top consumption.

Between programs like Top Chef, Iron Chef, MasterChef, and Throwdown! with Bobby Flay, it's hard to swing a jambon at your television without hitting some kind of cooking competition. But the roots of this phenomenon are much deeper than you might think. In The Thousand Dollar Dinner: America's First Great Cookery Challenge, Becky Libourel Diamond recreates the night in 1851--menu and all--when a group of wealthy Philadelphians commissioned chef James Parkinson to outdo their New York counterparts in a contest of epic culinary proportions, resulting in a 17-course meal including braised pigeon, turtle steaks, spring lamb, and rare wines and liquors. Eat your heart out, Guy Fieri. With a side of Beef Tongues.

A mouthwatering tale of one luxurious 1851 dinner.

This is a tale of conspicuous consumption at its finest: enough to make Gordon Gekko sit down and weep. In 1851 some Philadelphia businessmen vowed to show their New York counterparts how to put on a really good dinner. Their chosen chef,
James W. Parkinson, went to extraordinary lengths to achieve this: the 17-course menu included fresh salmon in lobster sauce, baked rockfish, turtle steak, oysters in aspic, spring chicken on toast, and Tokay wine sorbet. Just reading the menu feels like a naughty, extravagant joy.

Equally titillating are the wines and Champagnes matched to each course. The author,
Becky Libourel Diamond, painstakingly deconstructs this magnificent repast, dish by dish. Her approach is not limited to the ingredients: she has much to say about the origins of restaurants, tableware, the cultural habits of 19th Century Americans, and food history. Such a dinner, for 15 people, would cost around £22,000 today. For a mere £15.99 you can get a flavour of it here. Bargain.