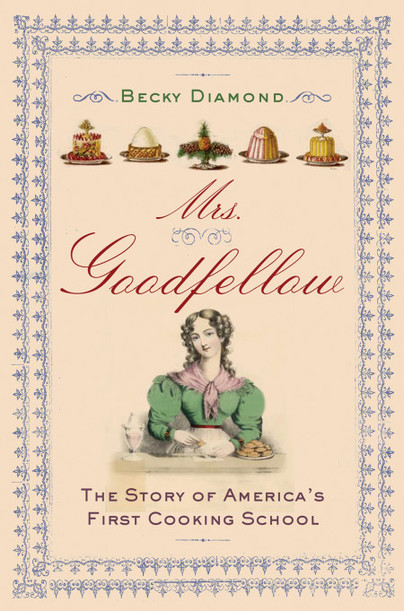 Add to Basket
Add to Wishlist
You'll be £16.99 closer to your next £10.00 credit when you purchase Mrs. Goodfellow. What's this?
+£4.50 UK Delivery or free UK delivery if order is over £35
(click here for international delivery rates)

In Philadelphia during the first decades of the nineteenth century, a widow, Mrs. Elizabeth Goodfellow, ran a popular bakery and sweet shop. In addition to catering to Philadelphia’s wealthy families and a reputation of making the finest desserts and sweet dishes in the young country, her business stood out from every other establishment in another way: she ran a small school to teach the art of cooking, the first of its kind in America. Despite her notori- ety—references to her cooking as a benchmark abound in the literature of the period—we know very little about who she was. Since she did not keep a journal and never pub- lished any of her recipes, we have to rely on her students, most notably Eliza Leslie, who fortunately recorded many of Goodfellow’s creations and techniques. Goodfellow is known for making the first lemon meringue pie and for popularizing regional foods, such as Indian (corn) meal.

By assembling the many parts of this puzzle from old

recipe books, advertisements, letters, diaries, genealogical records, and other primary sources, the author has been able to provide a more complete portrait of this influential figure in cooking history. Mrs. Goodfellow: The Story of America’s First Cooking School begins with what we know about Elizabeth Goodfellow and the kinds of foods that would have been available to her and how she may have used them, and then turns to the rise of both commercial eating establishments and books of recipes. From here, the author explains the rapid expansion of cooking schools, such as the New York Cooking Academy and the Boston Cooking School, made famous through its association with Fannie Farmer, and ends with a discussion of the role of celebrity chefs. Thoroughly researched and including a range of authentic recipes, Mrs. Goodfellow is a delicious exploration of the life and legacy of one of America’s most influential cooks.