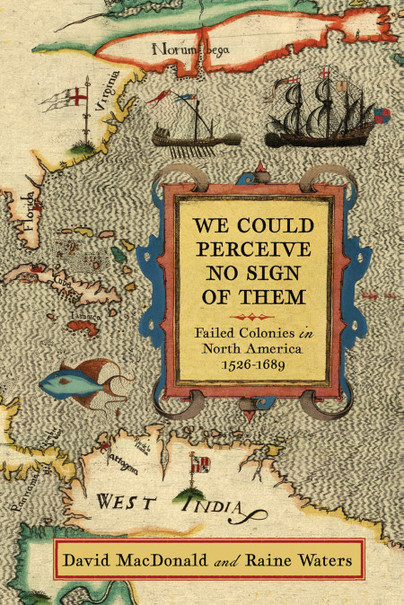 Add to Basket
Add to Wishlist
You'll be £25.00 closer to your next £10.00 credit when you purchase We Could Perceive No Sign of Them. What's this?
+£4.50 UK Delivery or free UK delivery if order is over £35
(click here for international delivery rates)

The nations of the modern Americas began as successful colonies, but not all colonies succeeded, and the margin between colonies that survived and those that failed was small. Both contribute to our understanding of the ordeals of the Europeans who first settled in the New World and of the Native Americans who had to interact with them, but with the exception of the famous lost Roanoke colony, the failed colonies of North America remain largely unknown except to specialists in colonial history. The Spanish and French repeatedly attempted to colonize parts of Georgia, Florida, and Virginia, while the Dutch, French, and English sought to establish permanent settlements along the northern waterways of the New World. The greatest problem faced by every colony was the specter of starvation. Native Americans gave food to newly arrived colonists, but such generosity could not endure. Indigenous people soon realized that colonists of every nationality were prepared to make war against Native peoples, conquer, subjugate, and even massacre whole communities unless they were cooperative and offered no resistance to the intrusion into their territory. In response, Native Americans withheld aid or resorted to retaliatory violence, dooming many European settlements. In We Could Perceive No Sign of Them: Failed Colonies in North America, 1526–1689, historians David MacDonald and Raine Waters tell the fascinating stories of the many attempts to establish a European foothold in the New World, from the first Spanish colony in 1526 on the coast of Georgia to the final disastrous French endeavors near the arctic. Using primary source texts, the authors synthesize the shared experiences of Europeans to better understand the very fine line between success and failure and the varieties of Native American responses.

DAVID MACDONALD is professor emeritus of history at Illinois State University. He received a BA from California State University at Fresno and a PhD from the University of Minnesota. He is the author of a number of books and articles, including Lives of Fort de Chartres: Commandants, Soldiers, and Civilians in French Illinois 1720-1770.

RAINE WATERS is an instructor at Heartland Community College. She received a BS and MS from Illinois State University. She is author, with David MacDonald, of Kaskaskia: The Lost Capital of Illinois.