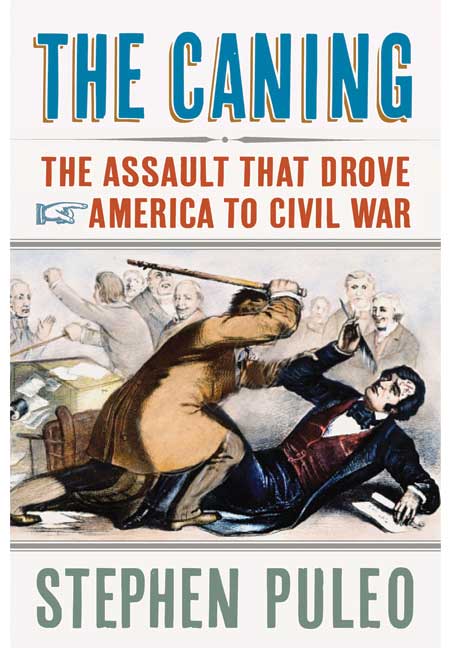 The Assault That Drove America to Civil War

Add to Basket
Add to Wishlist
You'll be £25.00 closer to your next £10.00 credit when you purchase The Caning. What's this?
+£4.50 UK Delivery or free UK delivery if order is over £35
(click here for international delivery rates)

Early in the afternoon of May 22, 1856, ardent pro-slavery Congressman Preston S. Brooks of South Carolina strode into the United States Senate Chamber in Washington D.C. and began beating renowned anti-slavery Senator Charles Sumner of Massachusetts with a gutta-percha walking cane. Brooks struck again and again—more than thirty times across Sumner’s head, face, and shoulders—until his cane splintered into pieces and the helpless Massachusetts senator lay unconscious, covered in blood, and having nearly wrenched his desk from its fixed base. It was a retaliatory attack. Forty-eight hours earlier, Sumner had concluded a speech on the Senate floor that had spanned two days, during which he vilified Southern slave-owners for violence occurring in Kansas, called Stephen A. Douglas of Illinois a “noise-some, squat, and nameless animal,” and famously charged Brooks’s second cousin, South Carolina Senator Andrew Butler, as having “a mistress... who ugly to others, is always lovely to him....I
mean, the harlot, Slavery.” Brooks not only shattered his cane during the beating, but also destroyed any pretense of civility between North and South—a line had been crossed and there was no going back.

One of the most shocking and provocative events in American history, the caning convinced each side that the gulf between them was unbridgeable and that they could no longer discuss their vast differences of opinion on slavery on any reasonable level.The Caning: The Assault That Drove America to Civil War tells the incredible story of this transformative event.

While Sumner eventually recovered after a lengthy convalescence, compromise had suffered a mortal blow. Moderate voices were drowned out completely; extremist views accelerated, became intractable, and locked
both sides on a tragic collision course. The caning had an enormous pact on the events that followed over the next four years: the increasing militancy of abolitionists; the meteoric rise of the Republican Party and American History/Civil War Abraham Lincoln; the Dred Scott decision; John Brown’s actions; the secession of the Southern states; and the founding of the Confederacy. As result of the caning, the country was pushed, inexorably and unstoppably, to civil war. Like turbulent, swift-flowing water through a narrow channel, America had nothing to slow it down and nowhere else to go.

Many factors conspired to cause the Civil War, but it was the caning that Puleo, made war unavoidable five years later.