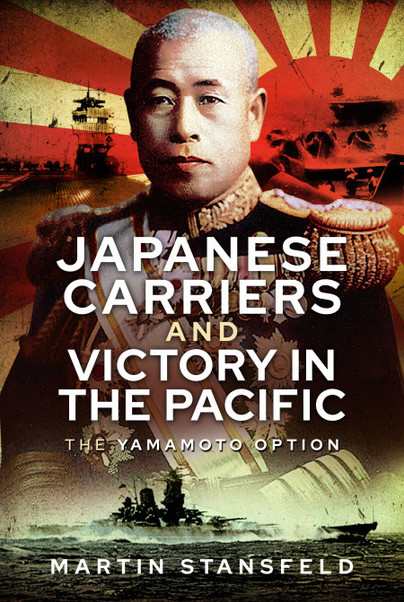 Japanese Carriers and Victory in the Pacific (Hardback)

Preorder
Add to Wishlist
You'll be £20.00 closer to your next £10.00 credit when you purchase Japanese Carriers and Victory in the Pacific. What's this?
+£4.50 UK Delivery or free UK delivery if order is over £35
(click here for international delivery rates)

Japanese Carriers and Victory in the Pacific focuses on the pre-war debate between building a new generation of super-battleships or adopting aircraft carriers as the ‘capital ships’ of the future. An Asian power in particular sees carriers as a way of challenging the USA and the colonial empires initially losing the contest yet coming out all right in the Cold War aftermath.

Martin Stansfeld examines the much overlooked genesis of Japan’s so-called shadow fleet that was a secret attempt to bring about parity with the US in carriers -- albeit only with slower speed conversions of liners and auxiliaries but along with the super-battleships cluttered launch facilities when these could have been devoted to keel-up fast fleet carrier production.

This first analytical look at what major launch facilities were available in Japan shows that the Imperial Japanese Navy could have doubled its fast carrier fleet thereby able to give sufficient air cover for an invasion of Hawaii rather than just the raid on Pearl Harbor, but only providing nobody noticed they were building all these carriers. This is shown to have been entirely possible given the IJN’s extraordinary success at covering up their super-battleship and shadow fleet production. This secret fast carrier fleet programme is given the name ’phantom fleet’ by Stansfeld who proceeds to demonstrate how the strategy of the Pacific War would have been transformed. Weaving through the chapters is an exotic cast of characters led most notably by Admiral Isoroku Yamamoto, the conceiver of Pearl Harbor and a figure of mythic status to Japanese today and famous around the world thanks to the movies. Stansfeld dwells on the ironies of war, notably how, without the ‘day that will live in infamy’, America might never have become the worldwide super-power it is today.

Martin Stansfeld endured a professional career in public communication in London and in New York as a publicist latterly notably worldwide for Sotheby’s in particular. He was educated at Eton and at Christ Church College, Oxford and graduated in Modern History. For his special subject he chose naval history and the theory of war, which became one of his abiding hobbies thereafter. Gifted as a child with a Janes Fighting Ships annual he was inspired to model the entire Imperial Japanese Navy in plasticine and to scale. Why the IJN? Because their ships looked far sexier than anyone else’s (as seems a choice made by the model ships hobby in more modern time). His other main historical interests have focussed on the transition of the Age of Late Antiquity into the Dark Age, which involved him as leader in Debrett’s Quest for King Arthur (later published by Doubleday) and with Debrett’s the publication of Debrett’s Texas Peerage as editor of Debrett’s American Society series published by Putnam. Following that phase in New York

he returned to his native lowland Scots roots in Angus to look after inherited rural properties and to redevelop them, after habitat enhancement and subsequent management, for future sale; and in the course of that settling in semi-retirement on the Riviera. He is married to Monica originally from Ohio, US. His hobbies are art and antique collecting, salmon fishing, and history reading.