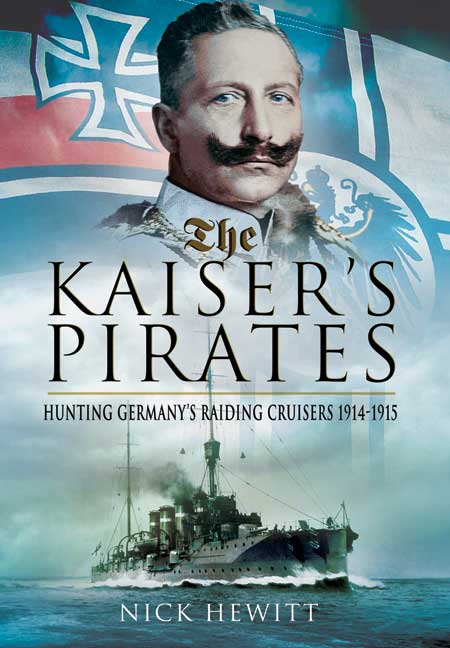 Add to Basket
Add to Wishlist
You'll be £25.00 closer to your next £10.00 credit when you purchase The Kaiser's Pirates. What's this?
+£4.50 UK Delivery or free UK delivery if order is over £35
(click here for international delivery rates)

This is a dramatic and little-known story of the First World War, when the actions of a few men shaped the fate of nations. By 1914 Germany had ships and sailors scattered across the globe, protecting its overseas colonies and 'showing the flag' of its new Imperial Navy. After war broke out on 4 August there was no hope that they could reach home. Instead, they were ordered to attack Britain's vital trade routes for as long as possible. Under the leadership of a few brilliant, audacious men, they unleashed a series of raids that threatened Britain's war effort and challenged the power and prestige of the Royal Navy.

Rounding up these 'Kaiser's Pirates' became the first priority for Winston Churchill, Britain's First Lord of the Admiralty, and Prince Louis of Battenberg, the First Sea Lord at the outbreak of war, and then Churchill's erstwhile friend and mentor, Admiral 'Jackie' Fisher, who took over as First Sea Lord just before the Battle of Coronel. The next year saw a battle of wits which stretched across the globe, drawing in ships and men from six empires. By the end, the Kaiser's Pirates were no more, and Britain once again ruled the waves.

In telling this incredible story, Nick Hewitt has drawn on the full resources of Imperial War Museums, including photographs and
compelling first-hand accounts of the events from the museums' sound archive.

As featured in Military History Monthly and Nuneaton News.

Highly readable and informative book...Hewitt's writing captures something of the pace and tension, both of the German's search for prizes and the British pursuit of the Germans...Good story-telling.

Pen & Sword have published this book at the right time with public interest in the anniversary of the First World War, particularly as most of the events described happened in the first year.
This fresh account, with a good selection of photographs is certainly well worth reading.

[Hewitt] writes in an engaging style which I could read until the cows come home. This is the kind of history telling I like most; enthusiastic, heartfelt and thoroughly believable. Mr Hewitt builds a colourful picture of the bond between the captains and their crews, of eccentricities and adventures afloat. He introduces us to the fragile politics of the many countries where the ships made brief stops and opens a window on a lost world where Britain was the superpower ruling seas, hearts and minds in far off corners of your atlas.

Hewitt ably presents a fine account of the war's technological advances (and limitations) at sea, alongside what could also be described as the oft-forgotten importance of chivalry at sea. 'The Kaiser's Pirates' represents a quality addition to any serious naval historian's library as well as that of the passing Great War enthusiast.

It is in the additional detail Hewitt has drawn together, in many cases from his former employers at the IWM, whose records include interviews, photographs, maps etc. and in the way hr has presented it in one volume, that makes this book such a worthwhile read for those with knowledge of the topi and the new students to it alike.

This is an eye-catching account of a seldom-told episode in how Britannia came to rule the waves.

“A stirring account of efforts to eliminate German warships beyond the waters of the Fatherland.”
“Makes good use of first-hand accounts left with the Imperial War Museum by those who were there.”