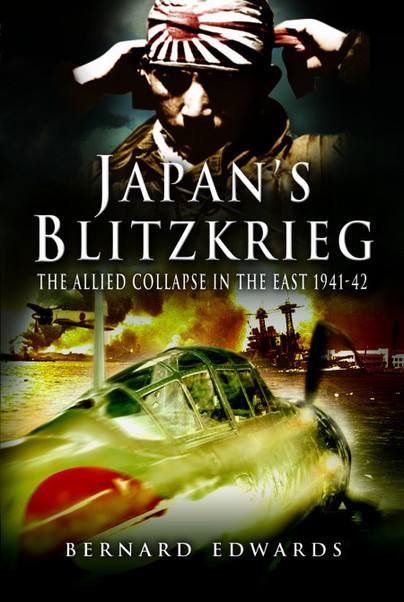 Add to Basket
Add to Wishlist
You'll be £19.99 closer to your next £10.00 credit when you purchase Japan's Blitzkrieg. What's this?
+£4.50 UK Delivery or free UK delivery if order is over £35
(click here for international delivery rates)

Early on the morning of 7 December 1941, 360 Japanese carrier-borne aircraft made a surprise attack on the US naval base at Pearl Harbor, and laid waste to the American Far East Fleet. They sank four battleships, crippled three cruisers and three destroyers, and seriously damaged two other battleships. One hundred and sixty-four planes were destroyed and 2,403 servicemen and civilians were killed. All for the loss of twenty-nine Japanese aircraft and fifty-five men. Two days later, the British battleships Prince of Wales and Repulse, were sunk by Japanese torpedo bombers as they raced north to intercept an enemy invasion force heading for Malaya. In these two bold forays, the Japanese had successfully emasculated Allied naval power in the East. There now remained no big guns afloat anywhere in the Pacific and Indian oceans capable of opposing Admiral Yamamoto's ships.
So began Japan's blitzkrieg. The Malay peninsular was rapidly overwhelmed, Hong Kong surrendered on Christmas Day, Manila went the same way on the 31st, and on 15 February 1942, in one of the most ignominious defeats in modern warfare, 85,000 British troops laid down their arms, and the vital base of Singapore was in Japanese hands. Thereafter, the rays of the Rising Sun spread ever outwards, overrunning island after island, until even Australia was threatened. The book tells how the Dutch Spice Islands, Java and Sumatra, became a last refuge for those fleeing before the Japanese whirlwind advance, and it was from here that the remaining Allied merchant ships in the area made their bid for freedom carrying hundreds of refugees. For many of these ships it was to be their last voyage.

On the morning of December 7th 1941, aircraft and midget submarines of the Imperial Japanese Navy began a surprise attack on the U.S. under the command of Admiral Isoroku Yamamoto. Despite long-standing assertions that this attack could have been predicted and prevented by the United States Military, the U.S. forces at Pearl Harbor appeared to be utterly unprepared, and the attack effectively drew the United States into World War II. The overall death toll reached 2,350, including 68 civilians, and 1,178 injured. Of the military personnel lost at Pearl Harbor, 1,177 were from the Arizona.