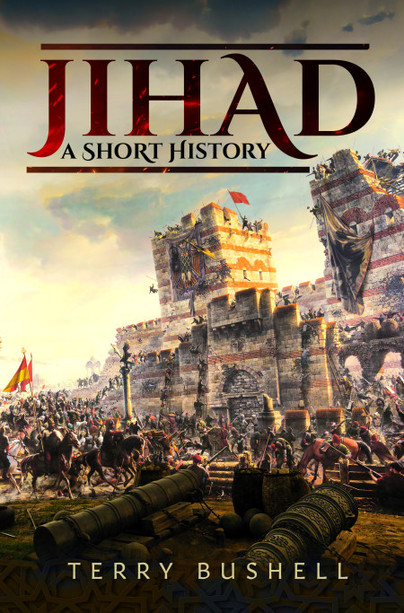 Preorder
Add to Wishlist
You'll be £16.00 closer to your next £10.00 credit when you purchase Jihad: A Short History . What's this?
+£4.50 UK Delivery or free UK delivery if order is over £40
(click here for international delivery rates)

Never before has such a serious subject been written about with such elegance, wit and humour.

Jihad: A Short History is entertaining popular history in strict chronological order enlivened throughout with wordplay, comedy, graphic detail and vivid anecdotes on leading figures. It describes Islam’s 1,000-year assault on the rest of humanity, leading up to the concluding chapter where military jihad has been abandoned in favour of hijra, migration.

It synthesises in a single readable comprehensive volume the records of the contemporary chroniclers and the works of later historians, which mostly treat some tiny aspect of this enormous subject. None of them led the author to question the main thrust of his narrative.

An understanding of the constant invasions of Christian Europe by the forces of Islam over a thousand years is vital to properly make sense of the world in which we now live.

The centrepiece of Jihad: A Short History, both figuratively and literally, is the defining 1453 siege and fall of Constantinople, which is described in detail and at length in order to convey the horror of such assaults.

Few westerners know of the catastrophic Battle of Mohács, one of the greatest military encounters in the history of central Europe; or of the Battle of Didgori, in which a staggering 200,000 men perished in a single day of fighting; and that the Muslims twice reached Vienna and in 1543 besieged and plundered Nice.

Jihad: A Short History concisely tells of these forgotten events, and of many more epic confrontations.

TERRY BUSHELL is a retired journalist. As a football reporter he covered the 1974 World Cup finals in West Germany. He was the Morning Star Moscow correspondent 1976-80. From Kabul he reported on the Soviet invasion of Afghanistan. His memoir, Marriage of Inconvenience, was published by André Deutsch in 1985. A qualified football coach, he managed several youth teams, one of which reached the under-10 London cup final.