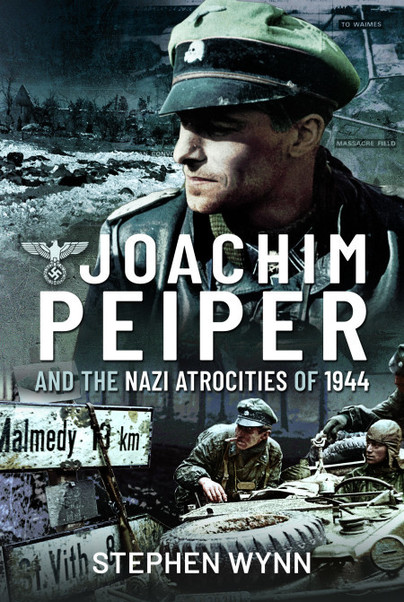 Joachim Peiper and the Nazi Atrocities of 1944 (Hardback)

Add to Basket
Add to Wishlist
You'll be £16.00 closer to your next £10.00 credit when you purchase Joachim Peiper and the Nazi Atrocities of 1944. What's this?
+£4.50 UK Delivery or free UK delivery if order is over £35
(click here for international delivery rates)

Joachim Peiper held the rank of Obersturmbannführer in Nazi Germany’s fanatical Schutzstaffel, more commonly referred to as the SS. He spent the first two years of the war as an adjutant to the Reichsführer of the Schutzstaffel, and leading member of the Nazi Party, Heinrich Himmler, where he would have witnessed at first hand the construction and implementation of numerous SS policies, many of which would have been in relation to ethnic cleansing and the Holocaust.

In October 1941, having yearned for a chance at combat, he changed roles and became a commander in the Waffen-SS, although he still remained in regular contact with Himmler. As a member of the 1st SS Panzer Division Leibstandarte, he saw service in the Soviet Union, Italy and Belgium.

Peiper was never charged with the atrocities at Boves, but in 1946 he faced an American military tribunal for the Malmedy masssacre. Although found guilty and sentenced to death, his sentence was reduced to life imprisonment but he was eventually released in 1956.

In 1972, Peiper moved to the French village of Troves in north east France. On 14 July 1976, his home was attacked and set on fire. Overcome by smoke, he died in the flames.


The unsolved peacetime murder of a war crimes convicted Nazi is described in a new book that tells of the life of military leader Joachim Peiper who is suspected of the massacre of hundreds of American prisoners of war.

SS Standartenfuhrer Joachim Peiper was sentenced to death for war crimes, his sentenced later commuted to life imprisonment in 1951 but he was released after serving ten years.

Later, for some unexplained reason, he moved from Germany to live in France where he resided in a well protected house. But one night in 1976 a mysterious group, possibly former Resistance Fighters, attacked his home, set it on fire where he died as a result of the blaze. The attackers, described as The Avengers, were never identified.

The book, authored by retired police officer Stephen Wynn and published by Pen and Sword (£20), is packed with well researched details of 1939-45 war crimes and those convicted of responsibility.
The author, in fairness, points out the massacre of prisoners of war in 1944-45 was not only by German troops. American soldiers also killed German prisoners of war they had captured. None of the Americans were ever prosecuted for war crimes.