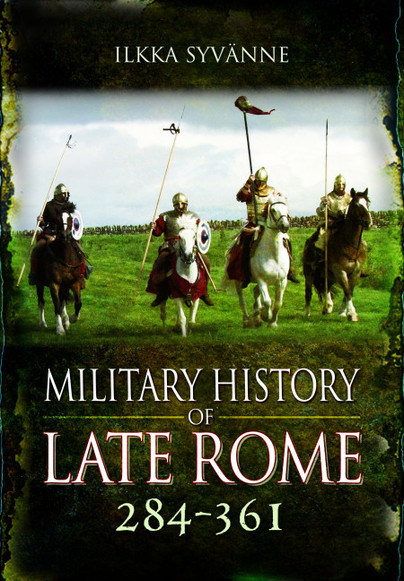 This ambitious series gives the reader a comprehensive narrative of late Roman military history from 284-641. Each volume (5 are planned) gives a detailed account of the changes in organization, equipment, strategy and tactics among both the Roman forces and her enemies in the relevant period, while also giving a detailed but accessible account of the campaigns and battles.

Volume I covers the period 284-361, starting with recovery from the 'third-century crisis' and the formation of the Tetrarchy. Constantine's civil wars and stabilization.are also major themes, with the pattern repeated under his sons. Constantius II's wars against the usurper Magnentius, the Danubian tribes and the Sassanid Persians illustrate the serious combination of internal and external threats the Empire faced at this time. The author discusses these and the many other dramatic military events in their full context and puts forward some interesting conclusions on strategic and tactical developments. He argues, for example, that the Roman shift from infantry to cavalry as the dominant arm occurred considerably earlier than usually accepted. Anyone with an interest in the military history of this period will find it both informative and thought-provoking.

Although it's clear from the outset that this book is a well-researched and ambitious study and that the author has a lot to say, his message is emphatically meant for those readers who are already versed in the subject.

This is a valuable overview of a period in which the Roman Empire was clearly still militarily powerful and resilient, capable of overcoming a series of internal threats and external enemies, and restoring her borders after the sort of Barbarian invasions that in the next century would see the fall of the Western Empire. I'm looking forward to volume two.

A very documented book that makes authority on a subject little studied and exciting.

This reviewer believes the work provides a comprehensive examination of Rome’s military history during this period of the empire and looks forward to the forthcoming volumes.

ASMEA - Association for the Study of the Middle East and Africa - Dr. Wyndham Whynot

In January I picked up a copy of the Military History of Late Rome (vol 1) 284-361 (AD) by Dr Ilkka Syvanne and I think that this book deserves to be recognized so here is my review.

So the 1st chapter of the book starts off with an overview of the Roman Empire in the 3rd century AD, examining the Roman government and society. The Roman armed forces are looked at from their overall strategy, generalship, cavalry and infantry tactics, the unit structure of the Legions and Auxiliaries, Intelligence gathering, equipment, logistics, the composition of the navy and how it operated, down to the recruitment and the relationship Roman troops had with civilians.

In particular, a very useful subsection to the chapter is the self-explanatory Civilians Guarding and Policing the Interior and Borders of the Empire.

The chapter is as its name suggests a detailed examination of the tribes and political entities that Rome had contact with outside the empire and their societies, governments and militaries. This section alone makes me almost daily pull this book off of my shelf and look into some tribe/kingdom and it's composition. I have found the sections on the Sassanid Persian Empire and the Gothic tribal confederations of the Tervingi, Greuthungi and their sub-tribes especially helpful.

The book examines the History of the 3rd Century Crisis and then goes into the military takeover of Diocletian.

The division of the empire after Constantine's death between his sons, civil wars fought by Constans and Constantine II, defence of the east by Constantius II, and the usurpation of Julian.

In conclusion, Ilkka Syvanne provides a detailed history of the period of 284-361, the campaigns and battles down to the marching formations and the specific tactics used by cohorts, legions and detachments in the specific battles. Throughout the book, Dr Syvanne carefully examines the sources to find the most likely way that each event would have occurred.

Overall this is a fantastic, well-researched book that makes a great addition to my growing collection of Late Roman History books. Money well spent!