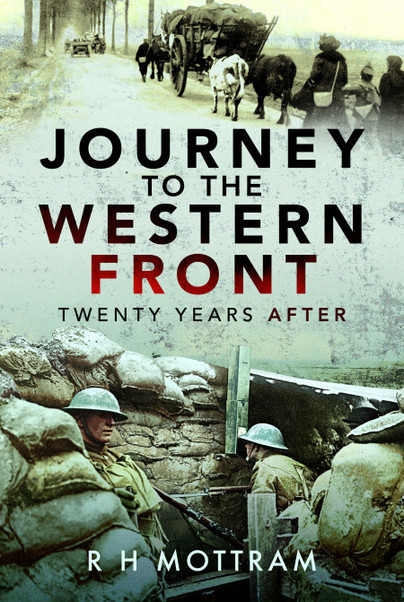 Journey to the Western Front (Hardback)

Preorder
Add to Wishlist
You'll be £20.00 closer to your next £10.00 credit when you purchase Journey to the Western Front. What's this?
+£4.50 UK Delivery or free UK delivery if order is over £35
(click here for international delivery rates)

Journey to the Western Front was first published in 1936; Ralph Mottram served on the Western Front for most of the war, first with the Royal Norfolks and then as a liaison with the civilians in the forward zone of the BEF, mainly on the Franco-Belgian border.

He conducted the groundwork for the book in late 1935 and early 1936, although he had been back to the old battlefields before. He covers much of the France and Flanders campaigning ground, using the imaginative method of dividing it into five areas, roughly based on those held by each of the five Armies of the BEF. It is fascinating to see today’s Somme and Salient through the eyes of a gifted author and veteran of the campaign who was writing just as the great remembrance construction work of the Imperial War Graves Commission was coming to an end, whilst the landscape, villages and towns had been restored to some semblance of normality.

Almost everything that Mottram describes, only a few years before the area was to be ravaged by another world war, is recognisable today. What he brings to this very personal guide is the educated eye of one who lived amongst the local population during the war years and yet was part of the massive undertaking that was the BEF. A literary man, the book is replete with acute observations, whilst the descriptions are always put into the context of the fighting men whom he knew and makes extensive use of the wealth of material – memoirs and histories - that was published in the years immediately after the war.

This is a classic gem of Great War literature. It is accompanied by a new introduction by Nigel Cave.

As featured in: Revisiting the 'silent gardens' of wartime

RH Mottram (1883-1971) is best known for his classic Great War novels commonly known as The Spanish Farm Trilogy, published between 1924 and 1926. These were an instant success and were soon adapted into a film, The Roses of Picardy; the proceeds from these enabled his to retire from his banking job and take up writing full time.

He wrote numerous books (including a biography of his friend John Galsworthy) and was a published poet even before the war. Born and bred in Norwich, he went on to become Lord Mayor in 1953.

This guide to the battlefields of the BEF was published in 1936; the fieldwork was done in October 1935 and January 1936.