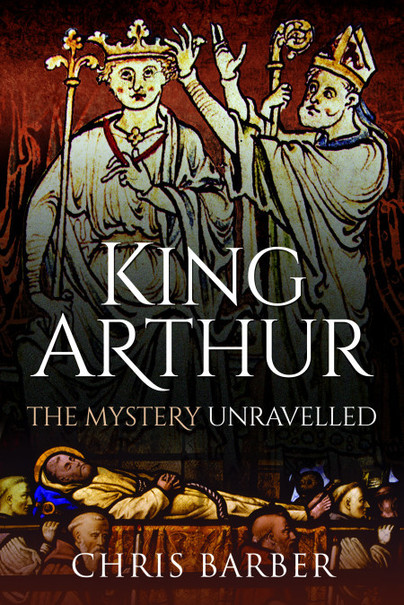 Add to Basket
Add to Wishlist
You'll be £18.99 closer to your next £10.00 credit when you purchase King Arthur. What's this?
+£4.50 UK Delivery or free UK delivery if order is over £35
(click here for international delivery rates)

This book is the culmination of over thirty years of work and research by the author, who is a King Arthur specialist and bestseller.

The book brings new information to light by examining through a jigsaw of connections throughout Dark Age Britain, especially Wales and Cornwall, as King Arthur is revealed to have been a hereditary King of the ancient land of the Silures in South Wales.

In this way, Chris Barber has set out to reveal the true identity of King Arthur, whose identity has been obscured by the mists of time and the imaginative embellishments of romantic writers through the ages. After sorting fact from fiction, he not only identifies the Celtic prince who gave rise to the legend of Arthur, but reveals his family background, 6th century inscribed stones bearing his name and those of his contemporaries; locations of his courts, battle sites such as Badon Llongborth and Camlann; the identity of his enemies, the ancient Isle of Avalon and his final resting place.

What you will find is a book that is serious about the conclusion it describes. Patriotic or personal, the authors passion is obvious, but I note the absence of distractions which detract from objectivity, a very difficult accomplishment when discussing a legend. The style is straightforward and the book has a number of colour photographs and illustrations that are both contextual and conform to the atmosphere of the subject.

I am not going to tell you what they discovered, if they did uncover the real King Aurthur or not, you will have to read the book. This book is a little complicated for some to sit down and enjoy, but if that is your preference then this is the book for you. This book “King Aurthur” has a lot of interconnected parts, many dates and complex names for some to get through. This book is composed of various diverse opinions related to King Aurthur, Chris and his team did a wonderful job of completing a exhausting and tremendous research to find out the facts if there truly is a King name Aurthur.

I found this book to be thoroughly researched and documented. The book introduced me to people and places that I had no idea were related to King Arthur. This book is a good choice for anyone who is intrigued by the legend of King Arthur. Another great history from Pen & Sword Books, who provided me with a copy in exchange for an honest review.
4/5 STARS!

All in all, I was left in two minds. A great deal of scholarship has gone into this book. The author paints a coherent picture and deals with a number of points such as whether Arthur was also Riothamus, 'King of the Britons'. But I do wish he'd shown more of his 'working' so I could see how he weighed the evidence to get to where he did.

Chris Barber, with his King Arthur,
has set itself the task to disentangle the fiction that surrounds the history of King Arthur, embellished for centuries by a whole series of talented authors, but often imaginative. The book attempts to identify the historic Arthur, but also his family and the context in England of the sixth century.

In this new book Chris Barber provides
overwhelming evidence that the true
location of King Arthur is South East
Wales. A thirty year programme of
research has enabled Chris to assemble a
jig saw puzzle of interconnecting
identifications and information which
throws new light on the history of Dark
Age Britain. The story of Arthur has been
confused, obscured and planted in the
West Country where it has firmly taken
root and formed the basis of a profitable
tourist industry, attracting visitors to such
places as Glastonbury and Tintagel
Castle.
This remarkable book is an intriguing
work of historical detection and it is the
most convincing and detailed account of
King Arthur ever compiled. It reveals the
true identity of a Celtic prince who
became known as Arthur, the locations of
his courts, battle site, the mysterious Isle
of Avalon and his final resting place.
There is an ancient belief that one day
King Arthur will return. Given our recent
dramatic political events perhaps now is
the time for him to re-awaken and reemerge
in Britain’s hour of need.

An accessible and important book that would form the basis for a fascinating documentary.

This book is a very detailed, thorough, and well referenced narrative. The arguments and conclusions are very persuasive to this non expert, general reader.

Most of us are familiar with the mythical figure of King Arthur. He and his legendary knights of the round table would search for holy cups, fight evil and embark on glorious quests to slay dragons and rescue maidens with the aid of the world's greatest wizard, Merlin. Many attempts have been made over the years to try find the historical figure that spawned the myth. Arthur has been claimed to be Roman, a native Briton, a Welshman and a Scotsman over the years, with no one making a convincing enough argument to end the debate once and for all.

Chris Barber's new book tries to do just that, and has over 30 years of hard work and research poured into it. Focusing on the argument Arthur was a native to the British Isles, Barber attempts to connect a web of information from Dark Age Wales and Cornwall to try and once and for all settle the debate of the King's identity.

The painstaking research Barber has put into this book is evident from the start, and each point is backed up with reference to important primary and secondary sources. He spends time sorting through some of the other theories before presenting the facts for his own Arthur, a Celtic prince who was active in the 6th century.

Those interested in Arthur's origins will find new and well-presented research.

This fascinating and scholarly new book is the culmination of more than 30 years’ work by the author, who brings new information to light via a maze of connections throughout Dark Age Britain, particularly Wales and Cornwall. King Arthur is revealed to have been a hereditary king of the ancient land of the Silures in south Wales. He sets out to reveal the true identity of King Arthur, which has obscured by the mists of time and the imaginative embellishments of various romantic writers through the ages. After sorting fact from fiction, the author not only identifies the Celtic prince who gave rise to the legend of Arthur, but also his family background. This is followed by a discussion on 6th century inscribed stones bearing his name and those of his contemporaries, the locations of his courts, battle sites such as Badon Llongborth and Camlann, the identity of his enemies, the ancient Isle of Avalon and Arthur’s final resting place.

This amazingly researched work also contains a preface, a chronology, an appendix covering the positive identification of King Arthur, text notes, a select bibliography and over 40 illustrations, most of which are colour photographs of present day sites and artefacts connected with the Arthurian legend.

... it's well-written and a thoroughly entertaining read. It helps to know the subject, of course, especially as it's full of odd names and relationships and sources, so telling the tale needs to be deftly handled. Chris Barber manages that very well indeed. Overall, it's a great introduction to the sources and many of the questions and problems associated with King Arthur.

Chris Barber is a well-established author with thirty one books published to date. They cover such subjects as mountaineering, industrial archaeology, prehistoric standing stones, and the mysteries and legends of Wales. His skills as a photographer are widely acknowledged and his illustrated lectures are very popular. He is a Fellow of the Royal Geographical Society and was awarded the MBE for Services to the Community and Tourism in the 2008 New Years Honours list. His many interests and achievements have also been recognised by an entry in Whos Who in the World.