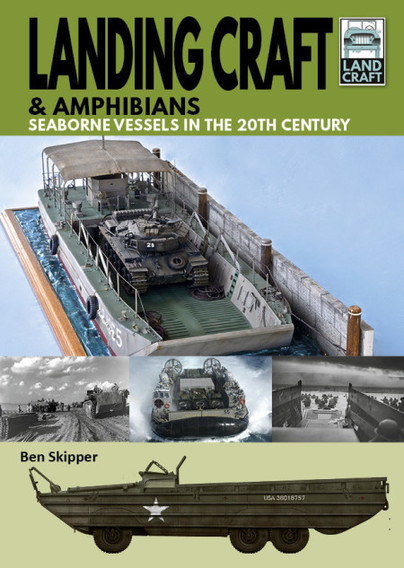 Seaborne Vessels in the 20th Century

Add to Basket
Add to Wishlist
You'll be £13.50 closer to your next £10.00 credit when you purchase Land Craft 10: Landing Craft & Amphibians. What's this?
+£4.50 UK Delivery or free UK delivery if order is over £35
(click here for international delivery rates)

From the wars of antiquity to the recent events in South West Asia, landing craft and amphibians have been an ever-present seaborne and battle space asset in one form or another for the commander wanting to get boots on the ground. Refined during the Second World War with the introduction of the Amphibian, and again with the perfection of the hovercraft, the landing craft’s finest hour in popular consciousness occurred on 6 June 1944.

This Land Craft title offers the modeller an exciting range of subjects, era and theatre choices, especially those modelling the Second World War.

"...will be of great interest to modelers and naval enthusiasts alike."

As with all of these books I believe they are aimed primarily at the modeller of which they do very well. This issue is no exception detailing design and development, Variants, detail, service and ‘in action’, Camouflage and markings. Amodel showcase along with detailed builds and modelling products are all covered. Not a huge publication however another good one!

You are presented with the written information first, followed by artists renditions in four way view of some of the vehicles and vessels and then the book moves onto finished models, before closing with some of the kits available and conversion sets for making something a little different. In closing I would like to thank Ben Skipper for having tackled this offering in a logical manner and making it a pleasing addition to the series.

Overall this is an excellent reference for a modeller who would like to work on a landing craft or other amphibious vehicle.

The standard of printing is high with good glossy illustrations... Ben Skipper the author is himself a modeller and has produced two other books to date. Hopefully, there will be follow ons.

LandCraft 10 has perhaps the most fitting of titles, as author Ben Skipper has a close look at Landing Craft & Amphibians. A 64-page soft-cover book in the usual style for this series, so a great mix of both historical information and inspiration for modellers.
After a brief Introduction, this dives in to the Design & Development. moving on from the early Lighters, as used at Gallipoli, to more flat bottomed craft. starting with Allied craft, both large and small. It goes on to include those used by the Axis powers, including Germany, Italy and Japan. It moves on to deal with Amphibians, especially those vehicles designed to get cargo (men, machines and general cargo) from ship to shore, as well as tanks. This section carries on to include post-war equipment as well as WW2. Next are two smaller sections on Landing Craft Variants and In Detail. We move on to see examples of them In Service & In Action which feeds into 7 pages of artwork and captions on Camouflage & Markings. Page 43 through to the end of the book starts with a Modelling Showcase, featuring 4 particular builds, leading on into a more general guide to the many different kits and manufacturers who produce them in a wife mix of scales. All the sections are well illustrated throughout the book.
As a modeller for so many years, one of the things I like most is to see the actual background stories of the real thing behind the models we enjoy making and Ben does this in a neat package. I think it must have been difficult to get such a wide subject within the constraints of the series, so while there are some omissions there is still a lot in here to keep modellers and those interested in the history of Landing Craft in particular occupied for some time. Recommended without any hesitation.

This is a good overview of the subject that examines the various designs and solutions to amphibious landings. Good images, many in colour.