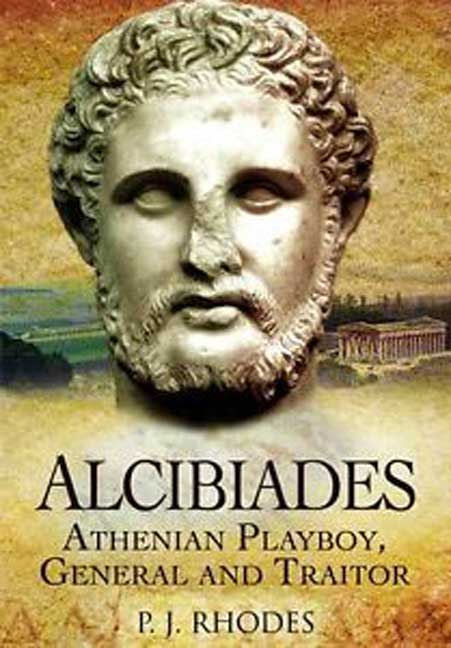 Click here for help on how to download our eBooks
Add to Basket
Add to Wishlist
You'll be £4.99 closer to your next £10.00 credit when you purchase Alcibiades. What's this?
Need a currency converter? Check XE.com for live rates

Alcibiades is one of the most famous (or infamous) characters of Classical Greece. A young Athenian aristocrat, he came to prominence during the Peloponnesian War (429-404 BC) between Sparta and Athens. Flamboyant, charismatic (and wealthy), this close associate of Socrates persuaded the Athenians to attempt to stand up to the Spartans on land as part of an alliance he was instrumental in bringing together. Although this led to defeat at the Battle of Mantinea in 418 BC, his prestige remained high. He was also a prime mover in Athens' next big strategic gambit, the Sicilian Expedition of 415 BC, for which he was elected as one of the leaders. Shortly after arrival in Sicily, however, he was recalled to face charges of sacrilege allegedly committed during his pre-expedition revelling. Jumping ship on the return journey, he defected to the Spartans.

Alcibiades soon ingratiated himself with the Spartans, encouraging them to aid the Sicilians (ultimately resulting in the utter destruction of the Athenian expedition)and to keep year-round pressure on the Athenians. He then seems to have overstepped the bounds of hospitality by sleeping with the Spartan queen and was soon on the run again. He then played a devious and dangerous game of shifting loyalties between Sparta, Athens and Persia. He had a hand in engineering the overthrow of democracy at Athens in favour of an oligarchy, which allowed him to return from exile, though he then opposed the increasingly-extreme excesses of that regime. For a time he looked to have restored Athens' fortunes in the war, but went into exile again after being held responsible for the defeat of one of his subordinates in a naval battle. This time he took refuge with the Persians, but as they were now allied to the Spartans, the cuckolded King Agis of Sparta was able to arrange his assassination by Persian agents.

There has been no full length biography of this colourful and important character for twenty years. Professor Rhodes brings the authority of an internationally recognised expert in the field, ensuring that this will be a truly significant addition to the literature on Classical Greece.

Alcibiades is a sort of mythical characters and I wanted to learn something more about him.
This is a good analysis of the founts and I was fascinated by the explanations and what I read.
I learned something new about this man but I think that you must have some basis of Ancient Greek history in order to appreciate it.
Recommended.

Four stars for me personally. For fans of the specific era and/or Alcibiades himself, I cannot imagine a more in-depth biography, five stars. There are also numerous black & white photos with captions which I found engaging and instructive.

Recommended without hesitation to anyone interested in the phenomenon Alcibiades. Erudite and easy to read and the author doesn't deceive his readers by pretending to know for sure something that is contested.

Rhodes is a major historian of ancient Greece and has produced many important books on classical Athens. A book worth reading by those interested in a detailed account of Alcibiades and Athenian history.

Charismatic and ambitious, Alcibiades was a key mover during the Peloponnesian War between Athens and Sparta in the fifth century BC – though it was not always clear which side he was on. A wealthy Athenian aristocrat and an influential general, he was flamboyant, unreliable and gifted. Despite the abundance of detail available about him from sources of the time – notably Thucydides and Plate – he remains enigmatic. Twice P.J. Rhodes quotes the telling comment of the early biographer Cornelius Nepos, that “Alcibiades b some inborn quality gained the credit for everything.” Modern scholars have variously set out to argue that Alcibiades was either inspired or opportunistic, and more than one has noted that the earliest sources give credence to both his supporters and his detractors. This is the first dedicated biography for some years and Rhode's mastery of recent scholarship on everything from Thucydides to “the sexuality of Athenian demoncracy” is evident. But though he aims at a wide readership, some previous knowledge of the subject is essential for readers here. The summary of the political background is a masterpiece of compression but dense nonetheless, which the later detail will be confusing for the general reader but invaluable to students trying to disentangle the story of the Peloponnesian War or to weigh up the relative value of conflicting sources.
The book is measured throughout. When he tells of Alcibiades' death in a Phrygian village, Rhodes sustains the drama while weighing up the evidence. Alcibiades was murdered as he fled a burning house where he might have been staying with a famous courtesan, by Persian agents at the behest (perhaps) both Athens and Sparta. But the remark that the later history of Alcibiades' family was an anti-climax, “known only from gravestones”, is an unexpected close to a story of such panache.

P. J. Rhodes was the resident specialist in Greek history at Durham University's Department of Classics and Ancient History for 40 years. Since his retirement in 2005 he has been Honorary and Emeritus Professor. He is a Fellow of the British Academy, where he was vice-chairman of the Classical Antiquity Section 1999-2002 and chairman 2002-5, and is a Foreign Member of the Royal Danish Academy. He written many previous works on classical history, including translations of Thucydides (books II, III and IV-V.24). He lives in Durham.