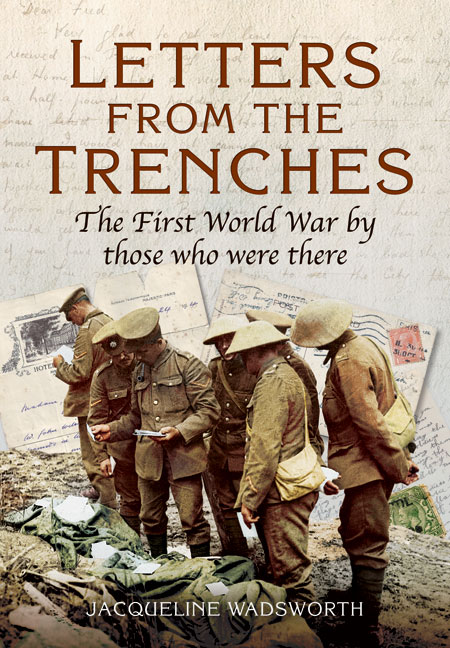 Letters from the Trenches (ePub)

The First World War by Those Who Were There

As seen in Who Do You Think You Are magazine

You'll be £4.99 closer to your next £10.00 credit when you purchase Letters from the Trenches. What's this?
Need a currency converter? Check XE.com for live rates

A history of the First World War told through the letters exchanged by ordinary British soldiers and their families.

Letters from the Trenches reveals how people really thought and felt during the conflict and covers all social classes and groups – from officers to conscripts and women at home to conscientious objectors.

Voices within the book include Sergeant John Adams, 9th Royal Irish Fusiliers, who wrote in May 1917:'For the day we get our letter from home is a red Letter day in the history of the soldier out here. It is the only way we can hear what is going on. The slender thread between us and the homeland.'

Private Stanley Goodhead, who served with one of the Manchester Pals battalion, wrote home in 1916: 'I came out of the trenches last night after being in 4 days. You have no idea what 4 days in the trenches means...The whole time I was in I had only about 2 hours sleep and that was in snatches on the firing step. What dugouts there are, are flooded with mud and water up to the knees and the rats hold swimming galas in them...We are literally caked with brown mud and it is in all
our food, tea etc.'

Jacqueline Wadsworth skilfully uses these letters to tell the human story of the First World War – what mattered to Britain's servicemen and their feelings about the war; how the conflict changed people; and how life continued on the Home Front.

As seen in 'Down Your Way Magazine'.

Overall, this book is a great social narrative of the First World War. With the passing of the Great War 100th Anniversary, and it perhaps to some being as distant as ever, this book ensure that the memory of the people who went through it continues to be close to us.

Author article 'The Shock of the new' as featured by

Author article on WWI battlefield tourism as featured by

Wadsworth's contribution to the effort of understanding the influence of war on the minds of soldiers and their families is a heart-rending yet hopeful and, at times, even warm read and worthwhile if you wish to learn more about the lives of those who lived through the Great War.

Author article as featured in - on changing time, recalling the confusion that broke out in Britain when 'local time' was replaced by GMT and daylight saving

A well-written and well produced book.

There are many anthologies of first-hand accounts from WWI, but Letters from the Trenches is a well-organised collection covering all social classes and groups - from officers and conscripts to women at home and conscientious objectors.

Letters from the Trenches reveals how people really felt and what they thought during the conflict, covering all social classes and groups.

This is one of those books that once you pick it up you don't want to put it down until it's finished... A well-crafted narrative.

The graphic and brutal observations of events are depicted with a sympathetic view of how they affected people.
A revealing, and often emotional read.

As featured in the South Wales Argus.

In 'Letters from the Trenches', Jacqueline explores how ordinary people coped with war. Using letters and diaries, the majority of which have never been published before, she follows servicemen and their families through the years of conflict, telling their stories in their own words.

As seen in the Exeter Express & Echo.

The author has arranged her collection of letters to tell the different stories of the war: the call to duty, loved ones left at home, marriage, battles, victory...and death. Told in the words of those who were there, it is a compelling, human view of the First World War.

As seen in the Western Daily Press.

The Experiences of mothers and wives, sweethearts and daughters left at home to fret and fear while their men went to fight are put into focus in a new book about the First World War. Through letters written from the front, the concerns and preoccupations of servicemen build into a true picture of lives disrupted, and so often destroyed, by separation and conflict. With the inevitable accounts of trench warfare, filth, suffering and death, author Jacqueline Wadsworth follows a well-trodden path...However, in 'Letters from the Trenches: The First World War By Those Who Were There' she chooses not only to examine the military aspects of war, but on how it threw the normal pattern of life into disarray.

Devon author Jacqueline Wadsworth has looked back into her family history to bring to life the horrors of the First World War. Her book 'Letters from the Trenches' was inspired by those written by her great-uncle who lost his life on the Somme battlefield aged 19. It is also a fascinating social history of wartime Britain - and her allies throughout the Empire - uncovering the consequences of the conflict for ordinary people.

This is a book of extremes. On the one hand, the brutal and graphic first-hand descriptions of the First World War make for difficult reading; on the other, the separation of loved ones at such an awful time brings forth tenderness and poignancy in spades. Painstakingly gathered, the material unearthed by Thornbury-based author Jacqueline Wadsworth comes from all over the country...With so many excellent first-hand accounts, the reader is left in no doubt as to what life was really like during the First World War, the words conjuring vivid pictures of situations endured both at home and on the Front. Intriguing and humbling, this book has appeal far beyond those with interests in war or history.

With so many excellent first-hand accounts, the reader is left in no doubt as to what life was really like during the First World War, the words conjuring vivid pictures of situations endured both at home and on the Front. Intriguing and humbling, this book has appeal far
beyond those with interests in war or history.

Reveals the thoughts of soldiers in their own words as they prepared for battles on the Western Front.

Letters sent home by Private Sydney Town reveal a remarkable determination to put on a brave face in spite of the suffering.

Letters from the Trenches: The First World War by Those Who Were There is a set of deeply personal records.

Through letters written from the front, the concerns and pre-occupations of servicemen build into a true picture of lives disrupted, and so often destroyed, by separation and conflict.

As seen in the Hucknall Dispatch.

As seen in the Sunday Mirror.

As seen in the Thornbury Gazette.

The Great War has passed into history; there is no one left alive who can describe what the atmosphere was like a hundred years ago, as war was declared and erupted into a conflict that was to affect everyone, and was to leave its dark shadow over many nations.

In museums and archives, recordings of poignant, often faltering voices recorded long after the conflict are almost all we have to connect us directly with the participants. Their words are powerful, a moving testimony; but subject still to the passage of time and the healing of wounds. To me, the most authentic voices are those written at the time. Often mundane, letters from the trenches say a lot, simply by not saying too much.

In her survey of the written word, of letters and diaries, Jacqueline Wadsworth brings us a fresh perspective on what it was like to be there, day-to-day, on the home front and at the battlefront – and in so doing, brings us closer to the men and women who endured these four terrible years.

Letters from the Trenches is a fascinating tapestry of human experience on both the Front Line and Home Front between 1914 and 1918. On the brink of the Centenary, Jacqueline Wadsworth appealed for First World War family letters and diaries stowed away in attics. She discovered hundreds of previously unpublished accounts written by soldiers and their families, which she interweaves to tell the story of the conflict in the words of ordinary people.

Wadsworth highlights a huge range of haunting, touching, but also engaging and funny stories of soldiers from across the UK and the former British Colonies. Cheeky Canadian George Lamb writes of feeling more nervous than on the Front Line when taking tea with his English spinster aunts.

Philip Luxton from South Wales, seeks solace in imagining life at home continuing as usual. When at the Front, he writes wistfully to his wife, Hannah about the annual family seaside holiday: 'I hope you and the kiddies will enjoy yourselves and don’t forget to buy them a bucket and spade just as if I was with them.’

Readers will quickly find themselves caught up in the stories of soldiers like Sergeant George Fairclough, hauled in front of a court martial on wrongful charges and willing enthusiastic young boy soldier Charlie Alderton to return home to his six doting elder sisters.

This book reveals just how invaluable a source of emotional support letters were for soldiers and their families during wartime. Even in the most hellish conditions, they formed a 'slender thread between us and the homeland', as Sergeant John Adams described.

In the sea of books released for the Great War Centenary, Letters from the Trenches stands out as a warm evocation of how ordinary people's lives were affected by a devastating conflict. Highly recommended.

This is a book that delves into all aspects of war from the perspective of ordinary people in their own words. It has a fresh, visceral quality that is far removed from stark newspaper bulletins, missives from government and official documents. It is through the letters and diaries of those living through the horrors of war from the grass-roots, that the reader is transported to a different time. A time of hope, despair, excitement and trepidation. It is refreshing to read correspondence between families – those on the home front and those on the front-line. These private snapshots move, enlighten, and remind us that war affected everybody.

The chapters which cover letters between sweethearts/mothers and the importance of letters are particularly moving. The author lays bare the necessity of communication in a time of conflict; letters become a lifeline for recipients on both sides. Whilst there are letters, there is hope.

Whilst the book contains a myriad of excerpts from different people, there are a handful of characters followed throughout; the voices of Harold McGill and Tom Fake re-animated for a new readership. Within darkness come lighter moments. Anecdotes discussing lice, food and anglicised French translation, are a welcome opportunity for a wry smile!

Letters from the Trenches charts a course through shattered innocence, lives changed but above all spirit: a by-product of war we should all admire.

Sian Price, author of If You're Reading This...