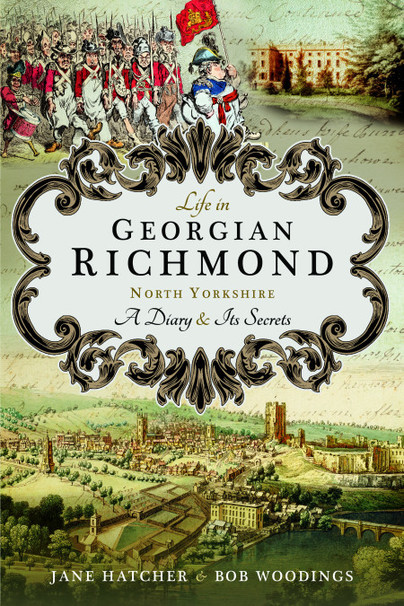 A Diary and its Secrets

Add to Basket
Add to Wishlist
You'll be £14.99 closer to your next £10.00 credit when you purchase Life in Georgian Richmond, North Yorkshire. What's this?
+£4.50 UK Delivery or free UK delivery if order is over £35
(click here for international delivery rates)

The Georgian Era was a period of immense change in Britain, immortalised in the work of writers such as Jane Austen and architects like John Nash.

For such an evocative period, the question must be asked: what was life really like? In Life in Georgian Richmond, the authors present a rare opportunity to hear the authentic voice of the mid-eighteenth century through the writings of a newly discovered diary, giving a short but intense portrait of a woman immersed in up-to-date Georgian social activities in a bustling and fashionable town in Northern England.

With this book, travel to mid-eighteenth century England: to fairs and markets, horse racing and travelling players. Learn of the changing role of women in Georgian England and along with the authors, unravel their secrets to bring alive society in this vanished world.

Fascinating account of the minutiae of daily life in 18th-century Yorkshire.

Article: 'Diary reveals life 250 years ago' by Chris Lloyd as featured by

Article: 'A whodunnit guide to life in 18th Century Richmond' by Chris Lloyd as featured by

Jane Hatcher, an architectural and local historian, has published extensively on Richmond, North Yorkshire and the North East. Particularly well-known are her studies of The Industrial Architecture of Yorkshire [1988] and her History of Richmond [2004]. Originally from York, she has lived in Richmond for many years. She has worked in research, conservation and adult education.

Bob Woodings has extensive experience of teaching literature and art in adult education. Prior to that he was a senior editor in London, concentrating on mass-market paperbacks. In 1983 he set up the first UK degree course in publishing. His publications include Shelley [1968], and The Fontana Biographical Companion to Modern Thought [1983] with Alan Bullock.