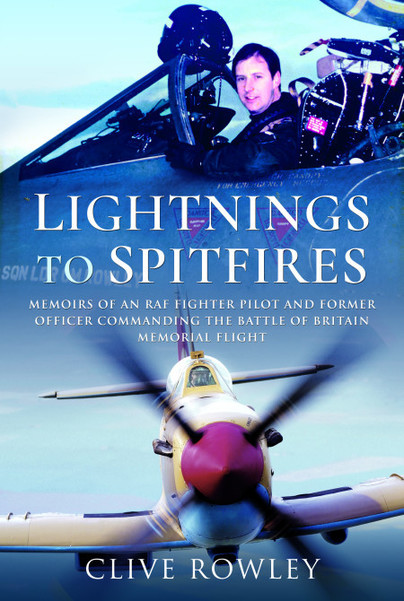 Add to Basket
Add to Wishlist
You'll be £17.50 closer to your next £10.00 credit when you purchase Lightnings to Spitfires. What's this?
+£4.50 UK Delivery or free UK delivery if order is over £35
(click here for international delivery rates)


ALL aeronautical enthusiasts will have read and have on their shelves those classic aviation autobiographies, “Sagittarius Rising” by Cecil Lewis, “The Big Show” by Pierre Closterman, Heinz Knokke’s “I Flew for the Fuhrer” and Johnny Johnson’s “Wing Leader” and not forgetting Gibson’s epic, “Enemy Coast Ahead”. To close the Cold War gap in your library my recommendation goes to Clive Rowley’s “Lightnings to Spitfires.”

His autobiography ranges across his flying career from his days as an ATC Cadet ending with him flying them on air experience flights from RAF Cranwell. It’s an epic journey and will shatter many myths and illusions we groundlings have about being a fighter pilot. It also explains why the RAF has always been the best Air Force in the world and remains so to this day.

Intertwined with Clive’s story are some very clinical analyses of the aircraft he has flown, their strengths and their weaknesses. For me his review of the Tornado F3 is a masterpiece I have not seen since being present at a lecture by Jeffrey Quill on the Spitfire.

Clive gives a great insight into the problems of operating very high-performance fighter aircraft on the front line and of the family pressures involved. Anecdotes on preparing for the First Gulf War, the Falklands and the sadly regular loss of friends and colleagues give a somewhat harrowing edge to his story.

Lightnings to Spitfires will give the reader a very clear picture into the life of the RAF, its unique esprit de corps, its operations and development of its aircraft, which I have never read before between the same covers of one book.

The final section ends his story with an in-flight conversion of a Grob Tutor from a three to a two bladed flying machine. My only comment having experienced a similar excitement is Clive’s call sign should have been “Iceman”.

I highly recommend this book which will fill a great gap in the reader’s knowledge of air affairs in the late years of the Cold War and its aftermath. Finally, a comment on Clive’s last and legendary flight with the BBMF, yes, he did pass through the gap in the boundary trees, now known as “the Rowley Gap” and did those floodlights wobble during his flypasts? Yes, they did, I know because I was there!

"Much meat for the enthusiast, researcher or historian to digest."