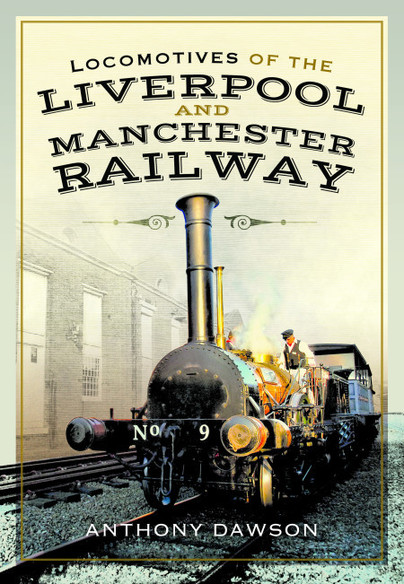 Locomotives of the Liverpool and Manchester Railway (Hardback)

Add to Basket
Add to Wishlist
You'll be £30.00 closer to your next £10.00 credit when you purchase Locomotives of the Liverpool and Manchester Railway. What's this?
+£4.50 UK Delivery or free UK delivery if order is over £35
(click here for international delivery rates)

The Liverpool & Manchester Railway was Britain’s first mainline, inter-city railway; opened in 1830 it was at the cutting edge of railway technology. Engineered by George Stephenson and his team – John Dixon, William Allcard, Joseph Locke – the project faced many obstacles both before and after opening, including local opposition and the choice of motive power, resulting in the Rainhill Trials of 1829.

Much of the success of the line can be attributed to the excellence of its engineering but also its fleet of pioneering locomotives built by Robert Stephenson & Co. of Newcastle. This is the story of those locomotives, and the men who worked on them, at a time when the locomotive was still in its infancy.

"As the author explains, the book should be read in conjunction with his Operating History of the company. Taken together, these two works are a notable achievement and add much to our knowledge of early railway development."

Anthony Dawson is well known for his works on the Liverpool & Manchester Railway and other early railway subjects, with his name becoming synonymous with well-researched books and articles either exploring new ground or revising old. This new work is no exception and covers in detail the locomotives and rolling stock of the Liverpool & Manchester Railway, taking the history of the line’s wheeled vehicles well past the Rainhill Trials and opening day which many histories focus on. It is illustrated with a mixture of contemporary artwork of the locomotives/rolling stock, works drawings and other technical illustrations, and modern images of preserved/replica items. It also goes further than just the vehicles themselves, with chapters on the first enginemen including the foremen giving a sense of social history to the work and insight into working conditions of the day, and maintenance and repair including engine sheds and locomotive working.

With the Liverpool & Manchester Railway seeing rapid change in locomotive design from Rocket through to Northumbrian, Planet and then the ‘Samson’, ‘Large Samson’ and ‘Patentee’ classes, as well as those by Bury (and not forgetting Braithwaite & Ericsson’s Novelty and subsequent designs, and Timothy Hackworth’s Sans Pareil, which also feature), the history of locomotives on the line can be seen as a microcosm of locomotive development in the late 1820s and 1830s as a whole, making the book extremely useful to those interested in early locomotive development generally, as well as specifically the Liverpool & Manchester. The numerous excerpts from letters and other period documentation give a real sense of immediacy and atmosphere, and the lengthy bibliography and end notes show the detail and length of research gone into to compile this masterly work.

In summary, this book is highly recommended, it is very rare to come across a railway book that I find impossible to criticise. This book simply oozes the author’s in-depth research and love of his subject. The publishers are to be commended for matching the author’s efforts by the quality of the finished product.

Anthony Dawson is a prolific writer on early railway history, and his books have an accessible and readable style. It could be easily imagined that everything that needed to be said about Liverpool and Manchester Railway locomotives has already been written about. Yet in 292 pages, Anthony Dawson uses extensive original research and his experience as a railway volunteer at SIM & NRM to bring together a new history of the locomotive power of the first main line railway in the UK. Written as part of a series - the first title is an Operating History - this book can also stand alone. It is not an account of the Rainhill Trials, although of course, the locomotives taken into the stock of the L&MR all are mentioned. Moreover it is an examination of the creation of a motive power fleet for a main line railway, including experimentation, the setting up of maintenance facilities and the establishment of a locomotive works. The subject of the people behind these innovations, developments and operations are also given coverage; a look into the names so familiar to us but also an insight into those less well known who nevertheless kept the wheels turning. For myself, I enjoyed the section on Melling's patent locomotives as Locomotive Superintendent John Melling sought new ways to make his locomotives more efficient. Rocket, Sans Pareil, Novelty and Planet are all covered, but there is so very much more in what I am sure will become a classic publication on the subject. So often a book on locomotives can become completely technocentric, but this is where Anthony's book comes into its own - by reviewing the personalities, the facilities and even the rolling stock itself - he is able to look into the realities of what was at first "The Grand Experimental Railway" full of trials, tribulations and technological dead ends - but within a decade became a mature main line with timetabled passenger and goods services. The text is referenced throughout, and a six page bibliography shows the depth of research to which the author went to ensure that he tells the full story. Board discussions, recriminations and wrong decisions, they are all recorded in a book that sets the standard for continued research into the Early Main Line Railways period. Copiously and well-illustrated, the foreword is by our very own former Head of Engineering Collections Richard Gibbon OBE - that should tell you all you need to know if you were in any doubt about buying this book. I look forward to more from Mr Dawson's pen, he is an historian to watch for the future.

This work complements the author's earlier work, The Liverpool and Manchester Railway.

This book gives an excellent insight into what is known by its unofficial title as The Grand Experimental Railway. Anthony Dawson’s background working in museums, as a volunteer at the Science & Industry Museum and the National Railway Museum, plus research of the highest standard has resulted in a remarkable book, both scholarly and readable. The standard of production is up to Pen & Sword’s usual exacting standards. It is well illustrated with a sufficiency of mainly contemporary prints and drawings to support the story. It is thoroughly recommended if you are interested in early railways.

This book displays a high standard of research and presentation. Anthony Dawson has written an excellent book. Definitely the best I’ve seen for some years and a credit to Pen and Sword.

There is a worthy tribute from former NRM Head of Engineering Richard Gibbon, whose foreword includes: “What sets this work apart form the rest is its thoroughness, diligence and attention to detail.” The author, whose five years writing this book generated 44 pages of references, has good reason to be proud of the result.

"A book that sets the standard for continued research into the Early Main Line Railways period. "

Anthony Coulls, The Journal of the Friends of the National Railway Museum - Summer 2021

I found it a fascinating read, and anyone with an interest in steam engines, engineering, or history of the industrial revolution will enjoy it too.

The whole book is illustrated by an excellent selection of relevant drawings, engravings and photographs, many of which are in colour. It puts the importance of the Liverpool and Manchester Railway in British railway history into context.
In summary, this book is a fascinating read and is highly recommended.

A book that every railroad history buff has to have in his library. It has all the information necessary to know this railway that was the pioneer in many things; the first based exclusively on steam locomotives, the first with double track throughout its route and the first with a signalling system among other things. In addition to all the information about this railway it also has a lot of good drawings and several photographs of the current state of some of its buildings.