Add to Basket
Add to Wishlist
You'll be £21.00 closer to your next £10.00 credit when you purchase Logistics in World War II. What's this?
+£4.50 UK Delivery or free UK delivery if order is over £35
(click here for international delivery rates)

John Norris shows how logistics, though less glamorous than details of the fighting itself, played a decisive role in the outcome of every campaign and battle of World War Two. The author marshals some astounding facts and figures to convey the sheer scale of the task all belligerents faced to equip vast forces and supply them in the field. He also draws on first-hand accounts to illustrate what this meant for the men and women in the logistics chain and those depending on it at the sharp end. Many of the vehicles, from supply trucks to pack mules, and other relevant hardware are discussed and illustrated with numerous photographs. This first volume of two looks at the early years of the war, so we see, for example, how Hitlers panzer divisions were kept rolling in the Blitzkrieg (a German division in 1940 still had around 5000 horses, requiring hundreds of tonnes of fodder) and the British armys disastrous loss of equipment at Dunkirk. This is a fascinating and valuable study of a neglected aspect of World War Two.

This offering from Pen and Sword and authored by John Norris takes a hard look at the issues faced by all sides and how those issues were overcome or they effected the outcomes. A surprisingly informative and interesting read covering an aspect of conflict rarely considered and under appreciated until it all goes wrong. A great read for anyone with an interest in World War and covering possible reasons for certain outcomes.

The short recaps of individual vehicles embedded within are often accompanied by photos, including especially nice color photos of restored vehicles.

The subject of logistics in warfare is amongst the most complicated and least glamorous areas of study, and as such many have glossed over what is an utterly essential component of any successful campaign. Yet as John Norris demonstrates it can be a fascinating story of almost stupefying statistics, with hungry armies consuming tens of thousands of tons of supplies each day, requiring continual replenishment of all things from rations, clothing and medical supplies, to petrol, shells, and vehicles; all of which often had to pass through obliterated towns, and along congested roads and wrecked railway lines. The book takes a chronological approach, describing the challenges faced by the Allies and Axis Forces in the West and the Far East, the state of their armaments programmes, and how these evolved over the course of the war. Particular attention is paid to key points in the conflict, including the effect that the Blitzkrieg revolution had on logistics, rebuilding of the British Army after Dunkirk, the struggles for North Africa and Italy, the Normandy landings, and the difficulties of sustaining these vast armies beyond the beachheads.

A truly fascinating book full of lots of information and jaw dropping information. I should say as a former Scout Leader I used to say when taking 20 kids on camp for a week, I used to joke that it was like feeding an army or going on military manoeuvres. Well this book certainly shows how wrong I was, but it many ways it was similar. The sheer quantities is mind blowing and from reading this book you could argue that the men and women doing this side of the war are just as important as those having to do the fighting. The book has a number of photos, charts and diagrams in, the photos are excellent both in black and white and colour, they mainly are of the vehicles of the less exciting vehicles but they are great none the less and are a key to the book. In my opinions this is a fantastic book, very well written and researched and certainly one I would happily recommend. 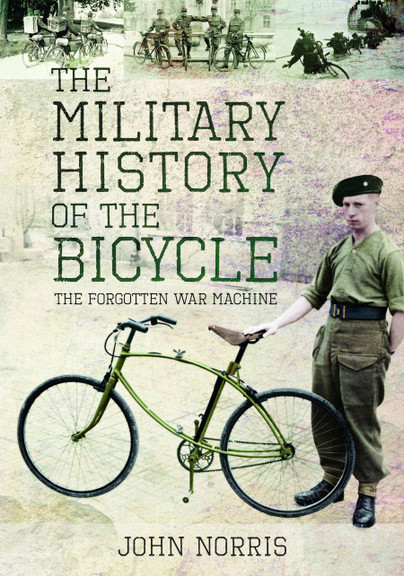 The Military History of the Bicycle The Forgotten War Machine (Hardback)

Almost as soon as a viable metal-framed bike was invented, it was put to military use, offering a much cheaper, less fragile and less logistically demanding alternative to horse transport. Widely used in many armies from the late 19th century, through both world wars and beyond, the bicycle really is the forgotten war machine. John Norris traces traces the development of military cycling from first experiments, including early (often flawed) designs for armed and multi-passenger versions. He explains how any why bikes were used for rapid movement of infantry units as well as carrying messages…

Click here to buy both titles for £40.99
More titles by John Norris