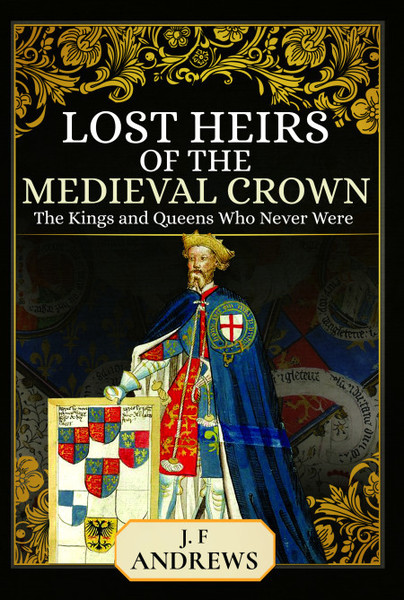 The Kings and Queens Who Never Were

Add to Basket
You'll be £15.99 closer to your next £10.00 credit when you purchase Lost Heirs of the Medieval Crown. What's this?
+£4 UK Delivery or free UK delivery if order is over £30
(click here for international delivery rates)

When William the Conqueror died in 1087 he left the throne of England to William Rufus … his second son. The result was an immediate war as Rufus’s elder brother Robert fought to gain the crown he saw as rightfully his; this conflict marked the start of 400 years of bloody disputes as the English monarchy’s line of hereditary succession was bent, twisted and finally broken when the last Plantagenet king, Richard III, fell at Bosworth in 1485.

The Anglo-Norman and Plantagenet dynasties were renowned for their internecine strife, and in Lost Heirs we will unearth the hidden stories of fratricidal brothers, usurping cousins and murderous uncles; the many kings – and the occasional queen – who should have been but never were. History is written by the winners, but every game of thrones has its losers too, and their fascinating stories bring richness and depth to what is a colourful period of history. King John would not have gained the crown had he not murdered his young nephew, who was in line to become England’s first King Arthur; Henry V would never have been at Agincourt had his father not seized the throne by usurping and killing his cousin; and as the rival houses of York and Lancaster fought bloodily over the crown during the Wars of the Roses, life suddenly became very dangerous indeed for a young boy named Edmund.

This is an interesting approach to the history of the English monarchy, and a reminder that this was a ruthless period, in which failure to secure your inheritance could be fatal!

A fascinating look at those people who narrowly missed out on the throne. Highly recommended to anyone interested in British history.

So I loved how each chapter started with a family tree. I loved how clearly it was written and organized. The genealogy of the royal family COULD be a super-tangled mess, but, the author was great in keeping the flow going and explaining how all the pieces fit together. I loved the stories.

One of my favorite time-wasting daydreams is imagining the PERFECT book that I'd love to read. It would be a series of novellas or short-stories possibly. Each would be set in an alternate world with a different what-if question answered. It would span the centuries. Each what-if would be based on a matter of succession/rule. I've been imagining this book for years now--probably five or more. So when I saw this book, it was like HALF a dream at least had been realized.

This is definitely one of the best books I've read this year. Many of us can recite the names of kings and queens who occupied the throne in medieval England but how many of us can remember the names of people who came very close to being crowned? Their lives and fates are no less interesting, and I'm glad they stepped out of the shadows in this fantastic book.
There are biographies of seventeen people, men and women, who were heirs to the crown but never became kings and queens. The book starts with Robert Curthose & William Clito (Chapter 1) and ends with Edward V (one of the "Princes in the Tower"), Edward of Middleham (Richard III's son) & Edward of Warwick (Chapter 10).
My favourite chapters were those about William Adelin & Empress Matilda, Eustace, William & Mary of Blois and the ones covering the succession during Wars of the Roses (Chapters 2, 3, 8, 9, 10).
The author is very knowledgeable about history of medieval England but she never assumes that readers know everything so she explains terms and intricate politics of the period very well. It's a rare skill to tell a story as complex as this one without being tedious, and J.F. Andrews managed to capture my attention - I couldn't stop reading. This book is a page-turner if you are lover of medieval history. I will certainly look for more titles from this author.

I loved reading about these figures in search of the power that was customarily legally theirs. Many had bad luck, some were unprepared for the events that brought other relatives to the throne, some would surely have been great kings, like Edward the Black Prince, who died before his father Edward III, as written above himself already an excellent king. Who knows how the story would have been with these alternative kings we can ask ourselves, but this is not an ucronic book, the facts narrated are extremely exciting and have actually happened.

Lost Heirs of the Medieval Crown was a thorough look into historical queens. I have a bit of an obsession with reading/learning all I can about medieval people and historical figures. This book was a great insight into the lives of the queens who ruled after William the Conquerer. Very educational.

This book is an excellent overview of the "might have been" rulers of England from the time of William the Conqueror to Henry VII. The characters portrayed suffer different fates, it's a very interesting way to look at English history of this period.

A really interesting look at the other members of the monarchy through the Middle Ages. A great start to see them and the family dynamic through war, politics, debt and more. A good read for those who like the history of kings and queens or English history between 1060 and 1400s.

This is is a good overview of several potential heirs to the English crown and what happened to them. I liked the detail in the book and would recommend it.

I had never heard of most of these "almost-rulers" -- with the exception of the Princes in the Tower and the Black Prince -- and it was interesting to read how the vicissitudes of fate led some people with royal blood to lose the crown, and sometimes their life!

Good survey of the also-rans of the medieval English succession--the heirs displaced by civil war, who died before their royal fathers, the incidents of matrilineal descent (no Salic law in England), legitimized bastards and the overall theme that if one could seize the throne and hold it, the church and the law would come up with ways to justify it and legalize it.

Lost Heirs of the Medieval Crown is an engaging study of exactly that. Taking the reader from the years after the Norman Conquest until the beginning of the Tudor era, there is much to learn about those who should have been king or queen had happenstance been a little different.
The author has an engaging writing style, and if, every so often, the opinions offered are purely based on the author's personal preference, it can be overlooked, as most historians will always have a personal favourite, or enemy from the time period that they study, and the author does make it clear when offering a personal opinion.
It is a very readable book, and I particularly enjoyed reading about Lady Constance at the beginning of the 1400's (as I've just read a fiction book about her). Neither does the author shy away from such difficult topics as the murder of the lost heirs, and is aseven handed when recounting the lives of the Black Prince, as those who suffered at the hands of over-mighty uncles.

This will make a nice little addition to anyone's history shelf. It is, as I mentioned, a very readable narrative on those who came so close and yet lost it all .... "there are very few happy endings ...".... The chapters are easy to read and the narrative not overly cumbersome or dry. There are extensive notes for those who wish to read further - I have quite a few of these resources myself!

New insights into ancient history or why family is always and everywhere exciting. There are many new perspectives and interesting information about the "not so important" persons in England's succession to the throne. Very interesting, especially for "foreigners", to whom this side of history is largely inaccessible.

I've read the stories of the royals who were "bypassed," but only as an aside as the monarchs who took power in their places were the focus of the stories. I stumbled upon this book and thought it would provide a different perspective, and it certainly did succeed at that. They're no longer just names in a history book - they're actually the focus of one for a change. I definitely learned a lot and it was an enjoyable read as well.

J. F. Andrews is the pseudonym of a historian who has a PhD in Medieval Studies specialising in warfare and combat. Andrews has published a number of academic books and articles in the UK, the USA and France, and was one of the contributors to the Oxford Encyclopaedia of Medieval Warfare and Military Technology (Oxford University Press, 2010).

Andrews is also active in public engagement with history, having written several historical novels and contributed popular history articles to blogs and magazines. Andrews runs a highly regarded website offering background information on many aspects of medieval life, which is consulted by a wide range of historians, students and historical writers.