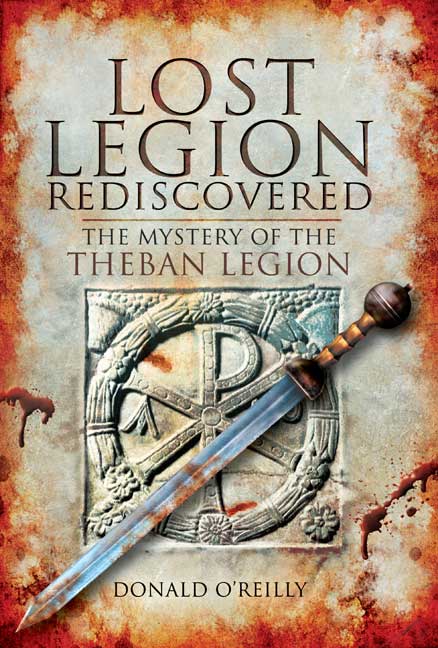 Lost Legion Rediscovered: The Mystery of the Theban Legion (Hardback)

Add to Basket
Add to Wishlist
You'll be £19.99 closer to your next £10.00 credit when you purchase Lost Legion Rediscovered: The Mystery of the Theban Legion. What's this?
+£4.50 UK Delivery or free UK delivery if order is over £35
(click here for international delivery rates)

In AD383, according to Bishop Eucherius of Lyon, flooding caused part of the bank of the River Rhone to collapse, revealing a mass grave. Eucherius identified the bodies as those of legionaries recruited to the Roman army from the Christians of the Theban district in Egypt, whom he claimed had been massacred nearly a century previously (near the modern village of St Maurice-en-Valais in southwestern Switzerland) for refusing to obey orders they considered immoral. This incident, asserted by Eucherius as matter of fact, is unrecorded elsewhere. Even the existence of this Theban legion is unclear.

Intrigued by this discrepancy, and suspecting a cover-up by official Roman sources, Dr Donald O’Reilly has spent many years undertaking some historical detective work. Piecing together scattered clues from ancient coins, inscriptions and obscure texts he identifies the Theban legion as fact and sheds light on their fate. In the process he paints a powerful portrait of an empire in turmoil, beset by external enemies and driven by religious and moral uncertainties within.

The author Donald O’Reilly has spent a long time piecing this together and looks like this mystery is totally interwoven with the last days of the Roman Empire. It also provides some interesting insights to the early periods of Christianity and the Constantine meeting of the bishops at Nicea.

This book is much more than a look at the mystery surrounding the legion. This is a very interesting read about the lead up to the last days of Empire.

O'Reilly puts a great deal of effort into assembling a collection of clues that might prove the existence of this Theban Legion and support the story of its martyrdom. Some are quite convincing, others require a real leap of faith to accept.

I must admit I'm not convinced by the author's arguments, especially for the existence of a Theban legion, but I do like the amount of detail he provides to support his ideas, which allows the reader to maker their own judgement on this issue. The result is an interesting historical argument, and a worthwhile attempt to discover the truth behind an ancient mystery.

Lost Legion Rediscovered is a remarkable book that should appeal to both the common reader and the historian of late Roman antiquity.

Dr Donald O'Reilly was a teacher of History and Classics at a community college in New York State. He is now retired and lives in Yonkers, New York.