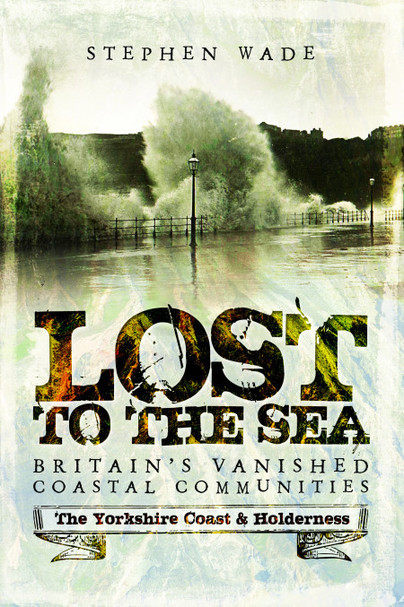 Lost to the Sea – The Yorkshire Coast & Holderness (Paperback)

Add to Basket
Add to Wishlist
You'll be £12.99 closer to your next £10.00 credit when you purchase Lost to the Sea – The Yorkshire Coast & Holderness. What's this?
+£4.50 UK Delivery or free UK delivery if order is over £35
(click here for international delivery rates)

Once there was a Roman settlement on what is now Filey Brig. In Holderness, a prosperous town called Ravenser saw kings and princes on its soil, and its progress threatened the good people of Grimsby. But the Romans and the Ravenser folk are long gone, as are their streets and buildings – sunk beneath the hungry waves of what was once the German Ocean.

Lost to the Sea: The Yorkshire Coast & Holderness tells the story of the small towns and villages that were swallowed up by the North Sea. Old maps show an alarming number of such places that no longer exist. Over the centuries, since prehistoric times, people who settled along this stretch have faced the constant and unstoppable hunger of the waves, as the Yorkshire coastline has gradually been eaten away. County directories of a century ago lament the loss of communities once included in their listings; cliffs once seeming so strong have steadily crumbled into the water. In the midst of this, people have tried to live and prosper through work and play, always aware that their great enemy, the relentless sea, is facing them. As the East Coast has lost land, the mud flats around parts of Spurn, at the mouth of the Humber, have grown. Stephen Wade’s book tells the history of that vast land of Holderness as well, which the poet Philip Larkin called ‘the end of land’.

Historically the story ranges from the destruction of Doggerland – the land bridge between
Britain and Europe – eight thousand years ago up to the present century. As Wade acknowledges, his account is based on fragmentary evidence but he builds successfully on this and enhances the sometimes scant evidence by a more extensive review of particular areas – Ravenser Odd off Spurn, which was so successful as a market town that it rivalled Grimsby until it was lost to the sea in the mid fourteenth century; the development of facilities, such as a railway on Spurn during wartime.
There is a varied selection of illustrations and a useful list of sources and bibliography.