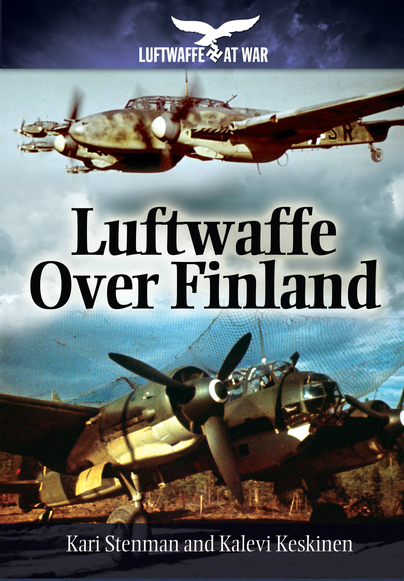 Add to Basket
Add to Wishlist
You'll be £9.50 closer to your next £10.00 credit when you purchase Luftwaffe Over Finland. What's this?
+£4.50 UK Delivery or free UK delivery if order is over £35
(click here for international delivery rates)

This superb illustrated series books charts the rise and fall of the German Air Force from 1939 to 1945. Each volume makes use of over a hundred rare photographs, many of them taken by Luftwaffe personnel, to bring history to life and record both the men and the aircraft they flew.

This title explores the German air war on the Northern Front. The Fins were active allies of the Germans in their war against the Soviets and allowed the Luftwaffe considerable freedom in its operations over Russia. Although conditions in the north were harsh, the Luftwaffe quickly adapted to the region and carried out a series of key operations over Russia between 1941 and 1944.

The Luftwaffe over Finland presents the men and the aircraft used in this campaign, mostly from Luftflotte 1 and Luftflotte 5. The outstanding collection of photographs includes almost every type the Luftwaffe flew from Finland – from Ju 87 dive bombers and Focke Wulf Fw 190 fighters to coastal patrol and transport units – as well as some of the pilots.

The short narrative and detailed captions put a final gloss on this superb collection, which is invaluable for modellers building Finland-deployed aircraft kits.

Part of a series which covers the history and the aircraft of the Luftwaffe during WW2, this specific title is particularly interesting for covering their service in Finland. The first couple of pages give a bit of historical background to this theatre of the war, along with details of the units involved along with notes on some of the main personalities.

The opening few pages of text are followed by a collection of over 100 informatively captioned photos which show some of the aircrew and a wide variety of aircraft types which were operated in the region. The first section is notable for featuring colour photos taken during the war, a total of 19 which include some nice clear images of various emblems found on different aircraft. The rest of the book which follows contains over 100 other black and white pictures.

With photographic evidence of the aircraft types operated by the Luftwaffe in Finland, along with the camouflage and markings they carried, this will be useful to aircraft modellers for ideas as well as providing some helpful inspiration for a number that show some good diorama potential. Good to see these titles on sale again in this new edition.