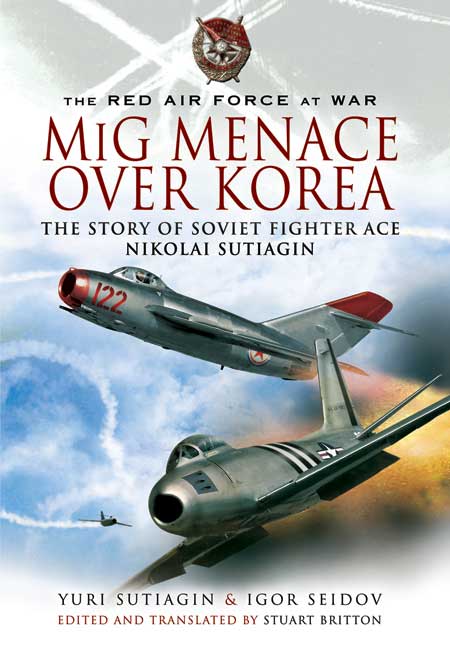 Click here for help on how to download our eBooks
Add to Basket
Add to Wishlist
You'll be £4.99 closer to your next £10.00 credit when you purchase MIG Menace Over Korea. What's this?
Need a currency converter? Check XE.com for live rates

Nikolai Vasil'evich Sutiagin, the top-scoring Soviet air ace of the Korean War, flew his MiG-15 in lethal dogfights against American Sabres and Australian Meteors throughout the conflict. He is credited with at 22 'kills'. Yet the full story of his extraordinary achievements - and the story of the Red Air Force in Korea - has never been told. Only now, with the opening of Russian archives, can an authoritative account of his wartime exploits be written. The authors use official records, the reminiscences of Sutiagin's comrades and his wife's diary to reconstruct in vivid detail the career of one of the great fighter pilots.

Nikolai Vasil'evich Sutiagin was born in central Russia in 1923 and joined the Red Air Force in 1941. He fought with the 17th IAP (Fighter Aviation Regiment) throughout the Korean War and is credited with destroying at least 22 enemy aircraft. Sutiagin won the Order of Lenin, three Orders of the Red Banner and the Order of the Patriotic War First Class, and he became a Hero of the Soviet Union in 1952. He retired from the Red Air Force as a major general in 1978 and died in 1986.

This is a fascinating book that is valuable for several different reasons - as a view of life in the Soviet Union, for its account of the fighting over Korean, often dominated by the American view and as an account of the first battles to be fought between jet aircraft.

Igor Seidov is the chief engineer of a television station in Maikop, Russia, and the author of numerous articles on Soviet aviation, with special emphasis on its role in the Korean War. He is the co-author of Red Devils on the 38th Parallel.

Yuri Sutiagin is a retired lieutenant colonel living in Monino, Russia, and the son of Nikolai Sutiagin. Before retirement, he was for many years a professor at the Iu. A. Gagarin Military Air Academy with the Faculty of Engineering-Aviation Services.