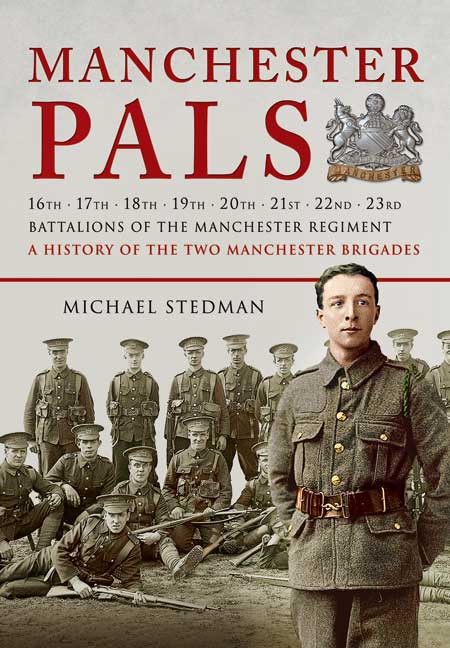 Add to Basket
You'll be £14.99 closer to your next £10.00 credit when you purchase Manchester Pals. What's this?
+£4.50 UK Delivery or free UK delivery if order is over £35
(click here for international delivery rates)

Unlike its near neighbour, working-class Salford, Manchester proved able to raise eight Pals battalions. Initially, these battalions were composed of middle-class men who experience before the war years was within the commercial, financial and manufacturing interests which formed the foundations of Edwardian Manchester's life and prosperity. Manchester was undeniably proud of its pals battalions; that the area was capable of raising. Seven months after their arrival in France the battle of the Somme was launched, on the fateful 1st July, 1916. On the right of the British Army's extraordinary efforts that day, the Manchester Pals were part of one of the few successful actions, taking the villages of Montauban and Mametz and making a deep incursion into the German defences north of the River Somme.

Presents this great city in 1914, a city still riding a wave of commercial success as, at the time, Manchester's industrial output was greater than many European states. During the early days of the Great War, the Pals were raised in optimism and were confident in their prowess as the city's finest men. This is the story of how they were enlisted, their self-assurance turned into military capability and then deployed as part of Britain's New Armies into a continental war which would ultimately consume them.