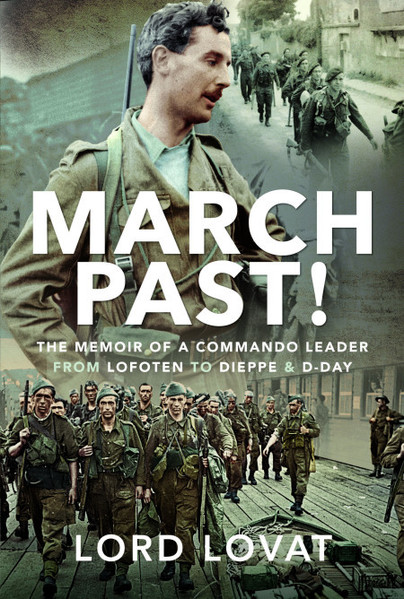 The Memoir of a Commando Leader, From Lofoten to Dieppe and D-Day

Preorder
Add to Wishlist
You'll be £20.00 closer to your next £10.00 credit when you purchase March Past!. What's this?
+£4.50 UK Delivery or free UK delivery if order is over £40
(click here for international delivery rates)

At the outbreak of war in 1940, Simon Frazer, the 15th Lord Lovat and a former Guards officer, was mobilized from the reserve list to join the Lovat Scouts, the British Army’s first sniper unit that had been formed by his father during the Boer War. The following year he volunteered for one of the new Commando units then being created.

Lovat was personally involved in the training of the Commando troops on the West coast of Scotland. He was eventually attached to, and led, No.4 Commando. On 3 March 1941, Nos. 3 and 4 Commando launched a raid on the German-occupied Lofoten Islands. In this successful attack, Operation Claymore, the commandos destroyed fish-oil factories, petrol dumps, and even eleven ships. They also seized encryption equipment and codebooks, as well as captured 216 German troops.

Promoted to temporary major, Lovat led 100 men of No.4 Commando and a 50-man detachment from the Canadian Carleton and York Regiment in a raid on the French coastal village of Hardelot in April 1942. For this action he was awarded the Military Cross on 7 July that year.

Lord Lovat was involved in further raids against the German-held French coast, most notably Dieppe, during which No.4 Commando destroyed the coastal battery at Varengeville-sur-Mer in a text-book commando attack. This resulted in Lovat being awarded the DSO.

Such was the effect the Commando raids had on German morale, Lovat had 100,000 Reichmarks placed on his head, dead or alive.

Promoted to brigadier, Lovat formed the 1st Special Service Brigade (later the 1st Commando Brigade) which stormed ashore on D-Day to secure the eastern flank of the attacking forces. In this, he famously instructed his personal piper, Bill Millin, to pipe the commandos and himself ashore, in defiance of specific orders not to allow such an action in battle. In the subsequent fighting Lovat was seriously wounded, effectively ending his active career.

These are the memoirs of one of the most remarkable fighting figures of the Second World War, who was involved in some its more exciting and dangerous operations. Despite his aristocratic ancestry, he led from the front and, without doubt, Simon Frazer, Lord Lovat was a soldiers’ soldier.

SIMON FRASER was born in 1911, the Master of Lovat and heir to an historic estate and world-wide clan. Educated at Amplwforth and Magdalen College, Oxford, where he joined the University’s Cavalry Squadron. Fraser was commissioned as a second lieutenant in the Lovat Scouts (a Territorial Army unit) in 1930. He transferred to the regular army, while still a second lieutenant joining the Scots Guards in 1931. The following year, Fraser succeeded his father to become the 15th Lord Lovat (referred to as the 17th Lord Lovat) and 25th Chief of the Clan Fraser. He was promoted lieutenant in August 1934. Lovat resigned his regular commission as a lieutenant in 1937, transferring to the Supplementary Reserve of Officers. He then, briefly, became Under-Secretary of State in the House of Lords.