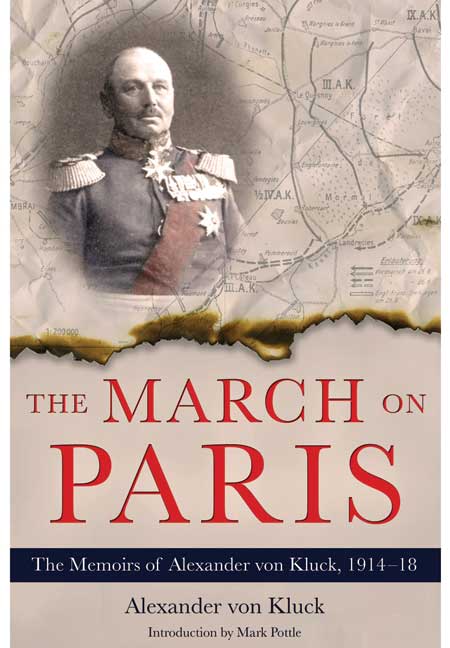 The March on Paris (Hardback)

Add to Basket
Add to Wishlist
You'll be £19.99 closer to your next £10.00 credit when you purchase The March on Paris. What's this?
+£4.50 UK Delivery or free UK delivery if order is over £35
(click here for international delivery rates)

Von Kluck saw active military service at an early age during the Seven Weeks' War of 1866 and, in 1870-71, the Franco-Prussian War. Rising through the army, he became inspector general of the Seventh Army District in 1913.

During the First World War von Kluck commanded the German First Army, notably in the Schlieffen Plan offensive against Paris at the start of the war in August 1914. An aggressive commander, von Kluck's impatience (at the request of Second Army commander von Bulow - who was unwilling to allow gaps to appear in the German front - he switched his advance south and east of Paris rather than the planned north and west), allied with a lack of direction from the German High Command and effective French and British counter-attacks, led to the failure of the Schlieffen offensive.

Von Kluck's role in the plan was to command the extreme right of the German forces in attacking the left flank of the French army and encircling Paris, bringing a rapid conclusion to the war.

After capturing Brussels on 20 August, von Kluck was almost successful in defeating France, his forces being halted a mere 13 miles from the French capital in the First Battle of the Marne from 6-9 September 1914. His forces had earlier fought costly battles against the British at Mons and at Le Cateau. With the suspension of the German offensive the nature of the battle changed to one of trench warfare, remaining essentially static until the end of the war.

Von Kluck was himself seriously wounded in the leg in March 1915, retiring from active service the following year in October 1916.

This new Frontline edition is particularly welcome, not least for Mark Pottle's valuable new introduction to von Kluck's text. This offers valuable insights about the book, and an enlightening view of von Kluck the commander and the man, the difficulties which he faced in September 1914 and the mutually contradictory operations which he was forced to undertake which ultimately led to 'Miracle on the Marne'. Recommended.

Here, in his own words he (Alexander von Kluck) tells the story of the rapid advance through belgium and Northern France. Readable and Informative. 10/10

This is not a descriptive war memoir or an attempt to exculpate is author of blame, but rather a precise account of the first army’s remarkable campaign.