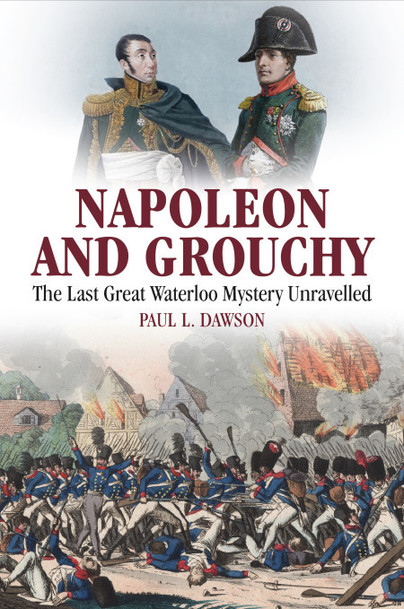 Add to Basket
Add to Wishlist
You'll be £25.00 closer to your next £10.00 credit when you purchase Napoleon and Grouchy. What's this?
+£4.50 UK Delivery or free UK delivery if order is over £35
(click here for international delivery rates)

One of the enduring controversies of the Waterloo campaign is the conduct of Marshal Grouchy. Given command of a third of Napoleon’s army and told to keep the Prussians from joining forces with Wellington, he failed to keep Wellington and Blücher apart with the result that Napoleon was overwhelmed at Waterloo. Grouchy, though, was not defeated. He kept his force together and retreated in good order back to France.

Many have accused Grouchy of intentionally holding back his men and not marching to join Napoleon when the sound of the gunfire at Waterloo could clearly be heard, and he has been widely blamed for Napoleon’s defeat.

Now, for the first time, Grouchy’s conduct during the Waterloo campaign is analysed in fine detail, drawing principally on French sources not previously available in English. The author, for example, answers questions such as whether key orders did actually exist in 1815 or were they later fabrications to make Grouchy the scapegoat for Napoleon’s failures? Did General Gérard really tell Grouchy to ‘march to the sound of the guns’? Why did Grouchy appear to move so slowly when speed was essential?

This is a subject which is generally overlooked by British historians, who tend to concentrate on the actions of Wellington and Napoleon, and which French historians choose not to look at too closely for fear that it might reflect badly upon their hero Napoleon.

Despite the mass of books written on Waterloo, this is a genuinely unique contribution to this most famous campaign. This book is certain to fuel debate and prompt historians to re-consider the events of June 1815.

I have to confess to having never heard of General Grouchy - at first, I thought it might be a nickname for Wellington, but on closer examination of the book I discovered that Grouchy could have changed the course of the Battle of Waterloo, with dire consequences for Wellington and England's forces. The book examines the life and career of a man who could have helped Napoleon, but for reasons which are covered in the book, chose not to. Paul's biopic of a man previously forgotten by historians fills in the gaps.