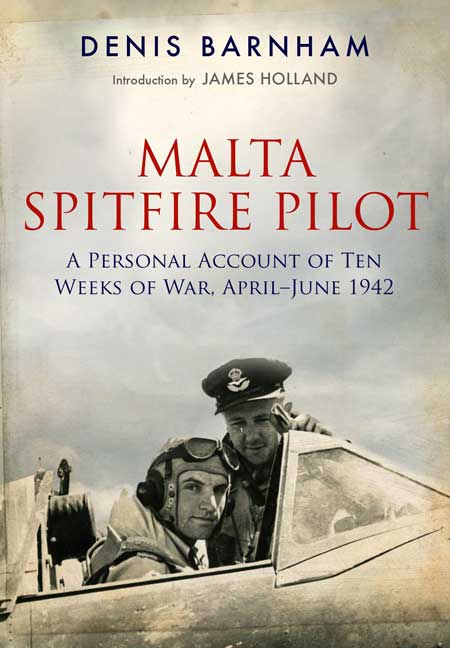 A Personal Account of Ten Weeks of War, April-June 1942

Click here for help on how to download our eBooks
Add to Basket
Add to Wishlist
You'll be £4.99 closer to your next £10.00 credit when you purchase Malta Spitfire Pilot. What's this?
Need a currency converter? Check XE.com for live rates

‘109s! Two, head-on views diving from my left, blinking with light. Curling blue tracers strand about me as I turn towards them. A third got my sight on him for an instant before he went under my nose. My helmets too big for me. Turn pressure pulls it over my eyes. Can’t see. Stupid. Push it up and straighten out: that’s better.

Malta Spitfire Pilot is the journal of Flight Lieutenant Denis Barnham. Having joined the RAF at the outbreak of war, Denis grew from an inexperienced young pilot into a battle-hardened Spitfire ace – most of which occurred in the 200 gruelling operational hours that followed his arrival on the embattled island of Malta, in a period of just ten weeks in the spring and summer of 1942.

Malta was of great strategic importance to the Allies and was pivotal to their success in North Africa as it provided the perfect launching pad for aircraft to attack Axis supply ships in the Mediterranean. As a direct result, the island, in turn, suffered intensive aerial bombardment by the Luftwaffe and Regia Aeronautica. This memoir was written by the author as he and his fellow pilots battled against terrible odds and under constant attack. It is one man’s dramatic and moving account of the air battle to save Malta.

Much has been written on this subject, but the author records his experiences in a personal way, rather than strategy. His narrative is based on a diary which covers the whole vista of living on a bombed island.

It is well worth reading his comments on action in one of the most bombed islands of the war.