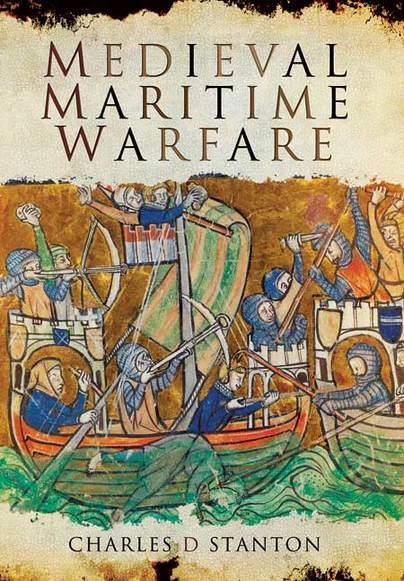 Click here for help on how to download our eBooks
Add to Basket
Add to Wishlist
You'll be £4.99 closer to your next £10.00 credit when you purchase Medieval Maritime Warfare. What's this?
Need a currency converter? Check XE.com for live rates

Following the fall of Rome, the sea is increasingly the stage upon which the human struggle of western civilization is played out. In a world of few roads and great disorder, the sea is the medium on which power is projected and wealth sought. Yet this confused period in the history of maritime warfare has rarely been studied – it is little known and even less understood. Charles Stanton uses an innovative and involving approach to describe this fascinating but neglected facet of European medieval history. He depicts the development of maritime warfare from the end of the Roman Empire to the dawn of the Renaissance, detailing the wars waged in the Mediterranean by the Byzantines, Muslims, Normans, Crusaders, the Italian maritime republics, Angevins and Aragonese as well as those fought in northern waters by the Vikings, English, French and the Hanseatic League. This pioneering study will be compelling reading for everyone interested in medieval warfare and maritime history.

The author has pioneered a study of this period, correcting the previous neglect. There is evidence of thorough research on which to base the presentation of the period and the assertions are well argued. This is a compelling study and enjoyable.

Back in the day, Dr. Daniel taught us that from the Battle of Actium in 31 BC to the Battle of Lepanto in 1571 there was no change in naval tactics. Well, there were changes, and Charles Stanton has sorted them out in an exceptionally clear and relatively not overwhelming way.

A readable, very serious study of naval warfare in the wider European world from the age of Justinian to the Renaissance...Stanton effectively weaves together rather technical discussions of warship design, seafaring and the sailor’s life, naval strategy and tactics, complex diplomacy, comments on people, commerce, cultures, all of which makes for a lot of history, not just maritime history. An excellent feature is that for some particularly important operations, Stanton follows his summary overview in his main text with deeper analysis in chapter annexes titled “Exemplary Engagement.” Many of the events he covers, such as Byzantine-Muslim or Aragonese-Angevin wars are likely to be unfamiliar with English-speaking readers, which makes this a particular valuable book.

One of the striking aspects of this book is that it does not ignore any aspect of naval warfare. Each chapter of the book contains a detailed case study of the specific area of Medieval maritime warfare in question, ranging from the siege of Constantinople in 717-718 to the Battle of Acre in June 1258 to the Battle of Sluys in June 1340 to the strange voyage of the Saint-Pierre de La Rochelle between 1462-75, which shows concerns of tactics and strategy.

The author explores the relationship between trade and piracy, points out the rapid development of naval strength in the face of intense competition, and comments as well on the demographic importance of having a well-trained body of seamen with political loyalty to the ruling regime, a factor that could not be taken for granted among Coptic crews of Muslim-led fleets, for example, or untrained landlubbers impressed into naval service without adequate training before being forced into disastrous battles against rival powers. Whether one’s interest is in the technology of medieval naval warfare, the strategy and tactics of engagements and campaigns, or a study of the complex interaction between naval institutions and the societies that they served and preyed upon, Stanton has crafted a thoughtful work that should encourage more research and writing into the fascinating field of medieval maritime warfare.

I must admit this book wasn't entirely what I'd expected. Recent titles in a similar vein have focused on the technical aspects of naval warfare in their period - navigation, ship building, weaponry, ship's crews or tactics. What we have here is a narrative history of the main periods of naval warfare in the Middle Ages, from the early period of Byzantine domination to the story of the Hanseatic League.

This is a very readable text, covering a mix of the familiar and the relatively unknown. I'd heard of the War of the Sicilian Vespers, but didn't know much about it. Likewise the details of the various conflicts between the Italian powers were new to me, as were some of the details of later Byzantine naval history. Each of the chapters is well written, and the author tells an interesting tale.

This is a useful addition to the literature on Medieval military history, as long as you aren't expecting a deeply technical discussion of the topic. It will be of interest to the general reader, and also helps fill in some of the gaps in my own knowledge.

In Medieval Maritime Warfare, Dr. Charles D. Stanton has concisely presented a tour of a topic that has received short shrift thus far in maritime history.

In this book, Dr. Stanton rightly presents the fall of Rome as a turning point of all history, but especially in regard to maritime history. The power vacuum left in the wake of Rome's death and the widespread geographic reach of the empire during its life leave the modern historian with a difficult task. The medieval world was full of various regional rulers and bit part players in the struggle for supremacy, and the sometimes confusing interaction and relation between the medieval powers stretched over continents for a thousand years...

... The book is organized into 10 chapters, the first 6 focused on Southern Europe, with the last 4 focused on Northern Europe. This organization works well because it uses specific battles or conflicts as focal points to bring an era of medieval warfare into focus. This format allows a close look at maritime warfare tactics used by various cultures at different periods, while simultaneously still including a look at the broad context of the development of maritime warfare throughout medieval history.

Another strength of the book is that, into the broad picture Dr. Stanton deftly weaves smaller details about nautical architecture, navigation techniques, arms and warfare tactics, and other important but little discussed points. The development of maritime technology and even the social and living conditions of the men who would have crewed these medieval ships are also discussed.

All in all, the book is great overview of the development of medieval maritime warfare in the various regions of Europe. Sixty illustrations and maps also help the reader visualize some of the battles and discussions of nautical architecture.

I would highly recommend this book to anyone interested in gaining a good overview of maritime warfare in medieval Europe, along with some more specific details related to such a discussion.