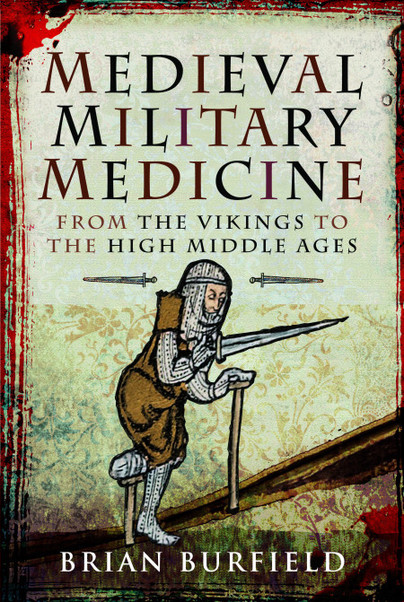 From the Vikings to the High Middle Ages

Click here for help on how to download our eBooks
Add to Basket
Add to Wishlist
You'll be £8.99 closer to your next £10.00 credit when you purchase Medieval Military Medicine. What's this?
Need a currency converter? Check XE.com for live rates

Soldiers of the Middle Ages faced razor-sharp swords and axes that could slice through flesh with gruesome ease, while spears and arrows were made to puncture both armour and the wearer, and even more sinister means of causing harm produced burns and crush injuries. These casualties of war during the 500-year period between the ninth and thirteenth centuries in Northern and Western Europe are the focus of Brian Burfield’s study, but they represent just a portion of the story – disease, disability, disfigurement, damaged minds all played their roles in this awful reality.

Surgical methods are described in the book, as are the fixes for fractured skulls, broken bones and damaged teeth. Disfiguring scars and disabling injuries are examined alongside the contemporary attitudes towards them. Also investigated are illnesses like dysentery and St Anthony’s Fire, plus infected wounds which were often more deadly than the weapons of the age. A final chapter on the psychological trauma caused by war is included and contains a significant focus on the world of the Vikings.

Brian Burfield’s account features many individual cases, extracting their stories of wounds, sickness and death from chronicles, miracle collections, surgeries, government records and other documents. The prose, poetry and literature of the period are also of great value in bringing these cases to life, as is the evidence provided by modern archaeological and historical scholarship.

This book is a valiant attempt to describe the experience and the treatment of wounds and illness arising from violent encounters in the Middle Ages. The emphasis on the experiences of specific individuals from a millennium ago is both moving and challenging in equal measure. Certainly, the footnotes and references, divided into three sections (primary and secondary sources, and research articles), provide copious material for any researcher to pursue further.

A Brian Burfield's graphic account of the way battlefield medicine was practised in the medieval period is fascinating, gruesome, and sometimes unbelievable...

****
This is a meticulously sourced and annotated history that contains almost no discussion of actual treatments because it seems so many of them are so sketchily referenced in primary sources. Or at least they are sketchily referenced by the author. Apparently, the medical manuals of the era tend to refer to “as the leeches know” or “in the way that the leeches do it” a lot of the time, so actual techniques are barely discussed, which is a shame. It’s sort of what I came for. But if you have an oral, hands-on tradition, it makes sense that little makes the page.

In addition to availing himself of the known medical manuals, leechbooks and herbals of the period Burfield makes use of Viking sagas, medieval romances, miracle accounts and other secondary sources where wounds and treatments are discussed. It’s clear that in many cases, especially in the miracle tales, that it was actually effective doctoring that saved a person’s life, not a visit to a saintly shrine. And his inclusion of mental illnesses caused by war is a nice touch. These more poetic accounts provide a lot of nuance on that.

It’s a nice round-up of the types of injuries and s fighting men most feared in the era, but if you came looking for detailed discussion of the work of a medieval Leech or surgeon or herbalist, or even a modern medical analysis of what the techniques might have been, you’re going to be greatly disappointed. (For example, there’s a long discussion of St. Anthony’s fire, caused by Ergot poisoning, but no discussion of how it actually effects the body and how it works, just the list of medieval symptoms and how people suffered with it. There’s no comparison of treatment techniques of the period and which might have helped. I was hoping for that sort of a discussion and this book doesn’t have it.)

It seems primarily useful for its truly extensive bibliography and would be a terrific place to start for your own research on this subject.

Brian Burfield is a real authority on this subject and period in medieval history. He has had many articles published on the topic. His bibliography and referencing is very impressive.

Those with a real interest in military history will find much to interest them.

There are some books via their covers and descriptions that I just love to get my head into because they are so interesting or intriguing. So I was really looking forward to this, in military terms who doesn’t want to read about limbs being hacked off, stomachs run through and all the other types of injuries incurred on the battlefield. The book is a little gruesome in some places but it’s not too bad, this is what happens when your fighting in a medieval battle. What is quite impressive is the hard work and amount of research put into the book by the author Brian Burfield, he has written an excellent book that’s a good clear and easy to understand book. The book also goes over the number of effects of these injuries which were numerously described, the book goes into treatments, diseases and results. Yet again we read about my favourite, the good old leeches too. The notes and bibliography are great in this book and certainly a bonus. I would certainly recommend this book and can see it appealing to a wide audience.

Like many non-fiction books, this is about exactly what the title says its about. It is about a 500 year chunk of the history of military medicine. It provides a history of combat related medicine and the different kinds of people/places that would have provided healing from injuries/wounds. It goes over the different kinds of injuries and wounds that a soldier would have encountered or had inflicted upon them during battle and the kinds of treatments for them. It also goes over several diseases and infections that were even deadlier than those wounds. It goes over what life would have been liked for people that have been wounded in combat. It also goes over the mental toll that battle had on the average soldier and officer.

I really liked this quite a bit. It provides as good a background as it can considering that many of the texts from this age do not survive to the modern age. Some parts of the book can be frustratingly vague but that is because the source material used can be frustratingly vague. It goes into fascinating depth as to the history of the healing arts and warfare without getting too bogged down and getting stale. Much of the information in here was new to me and it was fascinating to learn about. I loved how in depth each chapter was without being overly long. The source materials that were used were well explained at the start of the book and that helped a great deal when they were referenced in further chapters. And it is highly appreciated that an attempt was made to show the mental side effects of the horrors of war.

Overall I really recommend this book for history fans and fans of military history. Some sections can get quite graphic so I do not recommend this for younger readers. It is still quite a good book though and I really hope more people read this.

I was excited when this book arrived, so much so that it jumped the review queue. We spend most of our time working out what the manuscripts tells us about self defence and combat in terms of injuring or killing each other. One thing we don’t really consider is medicine. Yet one thing I always say is we have to be careful when fighting “in the period” as we don’t have access to quality medicine and doctors. Infections can kill just as much as anything else as can a lack of triage.

This book has arrived just at the right time and covers the period which we train and study. I love this book.

The way it is laid out and easy way it is read makes it a fun yet very detailed read. The chapters are not simply broken down by time period but by types of injury and types of treatment.

Anyone doing any kind of reenactment or living history as well as historical combat students should read this book to give them a better understanding of how medicine at the time was delivered. Sadly, a long period of warfare tends to generate advances in medicine – and the period covered in the book is no exception.

There are also so many good examples and references in this book. How knew there were actually leechbooks? Every day is a school day… Also I never realised that some of the medieval medicine is just as useful and potent today. Salves written in a book transcribed in 950AD were recently recreated and were powerful enough to kill MRSA. Bonkers stuff really.

The book also includes treatments for head injuries – the most common injury in combat according to courses. I really think you should buy this book. It also has a section on tormented minds – so how early doctors looked at combat fatigue and PTSD treatment.

Always had a morbid fascination with old medical techniques.
This book was brilliant full of information and well written.

A well researched monograph on medieval medical military practices. The writing style was readable and enjoyable. The inclusion of primary sourced was well used to support conclusions. Definitely recommend.

Medieval. Military. Medicine. Three words guaranteed to capture my attention and garner my interest. I have always been fascinated by all three topics, so when all three were put together in ONE title, I had to know more. Brian Burfield has done his research and expertly shared his learnings in an enlightening and engaging format. Each chapter felt like a lecture, with personal touches, to better help me understand the topic. You know the class I am talking about, the one you can’t wait to get back to in order to find out more. The kind where the professor is passionate and knowledgeable and it just spills over into the discussion, igniting your own excitement for learning more. The subjects were brought to life and explained in ways that a textbook could not do justice. The poems and text inserts provided amazing details and opened the discussion in new ways. There is so much content from actual historical documents! I especially enjoyed the chapter on psychological trauma, as this was just not openly acknowledged back then. A detailed glossary was a helpful tool in the reading as well. I can tell that this writing is truly a passion and labor of love, so I thank you for your willingness to put it all together and your willingness to share with others. I have benefited from your hard work and diligence.

I have been a soldier and now I am a paramedic for the NHS and I loved this book, there is a surgical museum in a hospital in London and this book reminded me greatly of that, I loved it recommend it to anyone be they ex military or not if you have any interest in history and medicine you will enjoy.

Brian Burfield has made a special study of wounds, disease and death in medieval warfare, focusing on the medical and surgical procedures developed during the period. He has published many articles on aspects of the subject in History Today, Ancient Warfare and Medieval Warfare.