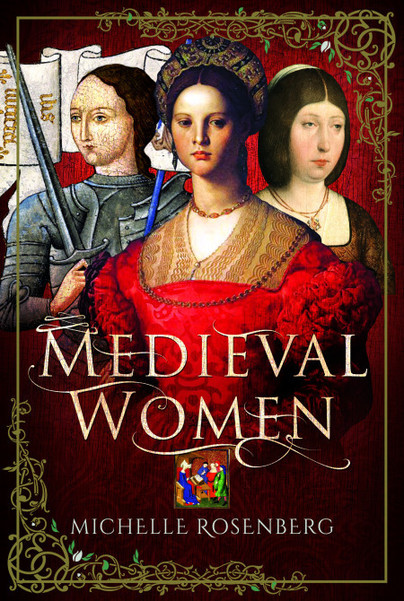 Preorder
Add to Wishlist
You'll be £20.00 closer to your next £10.00 credit when you purchase Medieval Women. What's this?
+£4.50 UK Delivery or free UK delivery if order is over £35
(click here for international delivery rates)

Order within the next 7 hours, 54 minutes to get your order processed the next working day!

A jewel of a book, this latest release from one of Pen & Sword’s women historians, contains a treasure trove of medieval dramatis personae, from the more mainstream figures such as Lady Godiva and Joan of Arc to the lesser known Crusader Queens and mystics. For the first time together, we meet two elusive Jewish medieval business women, one of whom was imprisoned in the Tower of London and the other who was likely one of the richest women in the world.

Meticulously researched and clearly showing the author’s keen eye for detail, this latest offering from Michelle Rosenberg builds on her reputation for bringing back to life women often forgotten from mainstream history. Relatively new figures include the elusive Virdimura of Sicily, and Julian of Norwich.

The medieval period saw life expectancy at around 33 years old, with the vast majority of women unable to read or write.

This text weaves together a rich and broad historic tapestry of women’s stories from the fall of the Roman Empire, the invasion of the Vikings, the First Crusade, Hundred Years War and Black Death.

It offers an intriguing insight into medieval women whose lives were deemed outstanding enough, (whether through exemplary religious conduct, queenly, consort or intellectual accomplishment or scandal), by their contemporaries, to record.

Their ability to endure, thrive and survive during a time when most women were subordinate to the men in their lives, makes them extraordinary; it also makes the loss of so many other missing stories so acute and tantalising for what our collective history has been deprived of.

Only imagine what richness of tales we might have had, should more women’s lives have been better recorded for posterity.