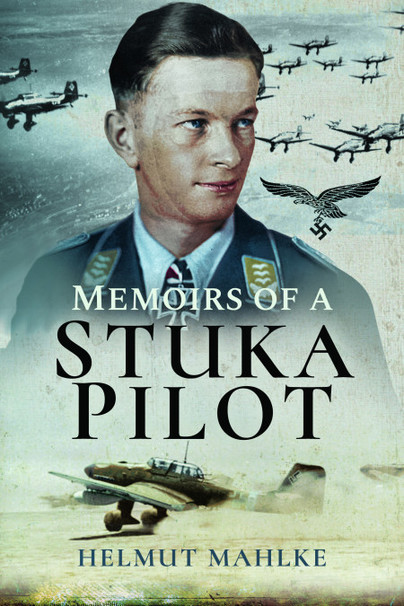 Memoirs of a Stuka Pilot (Paperback)

Add to Basket
Add to Wishlist
You'll be £16.99 closer to your next £10.00 credit when you purchase Memoirs of a Stuka Pilot. What's this?
+£4.50 UK Delivery or free UK delivery if order is over £40
(click here for international delivery rates)

After recounting his early days as a naval cadet, including a voyage to the Far East aboard the cruiser Köln, and as the navigator/observer of the floatplane carried by the pocket battleship Admiral Scheer during the Spanish Civil War, the author goes on to describe his flying training as a Stuka pilot.

The author’s naval dive-bomber Gruppe was incorporated into the Luftwaffe upon the outbreak of war. What follows in this book, therefore, is a fascinating Stuka pilot’s view of some of the most famous and historic battles and campaigns of the early war years: the Blitzkrieg in France, the Dunkirk Evacuation, the Battle of Britain, the bombing of Malta, North Africa, Tobruk, Crete and, finally, the invasion of the Soviet Union.

The author also takes the reader behind the scenes into the day-to-day activities of his unit and brings the members of his Gruppe to vivid life. The story ends when he himself is shot down in flames by a Soviet fighter and severely burned. He was to spend the remainder of the war in various staff appointments.

This memoir is a fascinating read if a little bit of an uneasy read in places.

As an historical account of the second World War from a German perspective it is an essential read.

...this is an excellent memoir that deserves the highest possible marks. It paints a vivid picture of air combat in flying the airplane that played a critical role in Germany’s early blitzkrieg operations.

As an aviation history enthusiast for all my life, and anyone who is familiar with the wartime reputation of the Stuka, then I think you fill also finds lots to interest you in this view from the other side of the fence, from an experienced Stuka pilot. A fine read.

This was, without doubt, one of the most accessible and eminently readable accounts of Stuka operations in Western and Eastern Europe that I have had the pleasure to read.

Let me start off by saying that I never thought I would enjoy this as much as I did.

You see the air war through the eyes of the enemy and this is what makes this book so different from the rest. I found the author to be very informative without being to arragont and he was a very capable pilot.

If you want to see what the air war was like from the Germans side then this is the book for you.

The author has provided a fascinating memoir that includes his childhood, his time as a naval cadet and his service aboard KMS Graf Spee as a float plane observer before his time flying Stukas. This book provides a great deal of information together with some very interesting photo-plate sections – Highly Recommended.

This book is a challenging but rewarding read. Helmut Mahlke details out his career as a Stuka pilot, and was clearly proud of his war record, his unit and his technical professionalism as a leader. The reader may be left uneasy at the Stuka’s use in WW2 as a terror weapon in the early part of the war. Mahlke was part of a naval squadron and trained initially to attack shipping, but went on to fight in the Battle of Britain, North Afrika and the Eastern Front.

There is a wealth of detail in the employment of the Stuka, and it is perhaps surprising that the pilots considered their aircraft to be robust and reliable, had high morale and took great pride in completing their missions. Mahlke’s views on Germany’s Italian allies may come as a surprise to those who have hitherto formed their opinions from only RAF accounts.

At its heart is the conundrum that faces any reader of a WW2 bomber pilot’s memoirs, particularly those of a pilot unquestioningly serving a totalitarian regime. The Dambusters were celebrated, yet the allied bombing campaign caused fare greater civilian casualties, returning the Nazis early efforts over Holland with interest. On both sides, civilians bore the brunt of the war.

For me, this was a fantastic read and I have learnt so much more from this book and in all honestly probably not one that I would have read ordinarily.

The book itself takes you on a remarkable journey from the beginning of childhood, to training, to hostilities, Blitzkrieg Poland, the fall of France, the Battle of Britain, Malta and Mediterranean, North Africa and finally to the Russian front when on the 8th July 1941 on his 159th and last flying mission helping an artillery battery that had been cut of by Russian tanks, he found himself up against new Russian Mig fighter aircraft, not the usual Ratas (I-16's) that he was used too. Three of these new Russian planes had positioned themselves nicely on his six after he had dived down to release his bombs at the Russian tanks, The first one got his burst away although at this point he thought it was ground fire and had already started to swerve side to side, it was only after hearing his gunner shouting and he looked over his shoulders did he realise the pending doom.

It was such a good read with lots of twists and turns, that I would recommend to anyone who is interested in the Stuka, German pilots, Helmut Mahkle himself or general history of World War 2 then I would recommend you read this book, I am sure you will not be disappointed.

A really good book with excellent insight... it fills a big gap in the market.

Born in Berlin in 1913, HELMUT MAHLKE joined the German navy as a cadet in 1932 before being transferred to the Luftwaffe three years later. He spent his whole operational wartime career with one Stukagruppe. After the war, he played a leading role in establishing both the new Luftwaffe and Germany’s new naval air arm. He died in 1998.