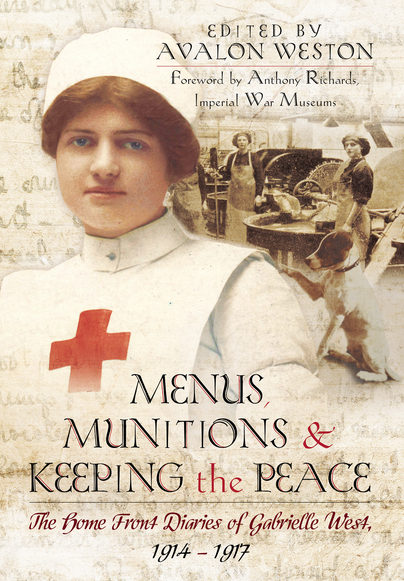 Named as Forces War Records' Book of the Month for January 2017!

Avalon Weston appeared on Countryfile on 15/1/17 talking about Gabrielle West and featuring the diary that the book is based on. Catch up via iPlayer

You'll be £19.99 closer to your next £10.00 credit when you purchase Menus, Munitions and Keeping the Peace. What's this?
+£4.50 UK Delivery or free UK delivery if order is over £35
(click here for international delivery rates)

When Gabrielle West wrote diaries about her war to send to her much missed favourite brother in India she had no idea that a hundred years later they would be of interest to anyone.
Soon after the outbreak of the First World War, Vicar’s daughter Gabrielle joined the Red Cross and worked as a volunteer cook in two army convalescent hospitals. She then secured paid positions in the canteens of the Farnborough Royal Aircraft Factory and then the Woolwich Arsenal, where she watched Zeppelin raids over London during her night shifts. Having failed a mental arithmetic test to drive a horse-drawn bread van for J. Lyons, she was among the first women enrolled in the police and spent the rest of the war looking after the girls in various munitions factories.
Gabrielle wrote about and drew what she saw. She had no interest in opinion or politics. She took her bicycle and her dog Rip everywhere and they appear in many of her stories. She had a sharp eye and sometimes a sharp pen.
At the end of the war she was simply sent home. She spent the rest of her life caring for relatives. She lived to 100 and never married. The First World War was her big adventure.
These days, the reader might feel MI5 should worry about those detailed line drawings of the processes in the factories being sent by Royal Mail across the world … but a hundred years ago?

The diaries are, well, diaries, so there are days in which nothing is written about, there are people who I don’t know who they are (there is a family tree at the end of the book, but I didn’t consult it), and some days she writes a couple of sentence while in other days she writes a few pages. For all these reasons I gave the book 5 stars, it’s such a vivid and realistic account of her life that it’s really fascinating.

This is a charming diary that gives us a rather unusual view of the Home Front during the First World War, seen from the point of view of someone who was living and working away from home, and seeing the massive expansion of the British arms industry at first hand.

It gives a fascinating look at one woman’s life during WWI but it is much more than that. Through photographs as well as Bobby’s own illustrations, the reader is able to get an up close look at work in the munitions factories including drawings of the munitions themselves. We also get a glimpse of the life of a middle class woman whom the war has given freedoms never before offered to women, a woman who is able to attain work only previously allowed to men but who is fully aware of the unequal position it offers. A definite high recommendation to anyone who would like a glimpse of everyday life during the war.

For lovers of period detail who want to enjoy the adventure of the First World War through the eyes of a Sherborne Old Girl, Menus, Munitions and Keeping the Peace is likely to become a much-treasured classic.

I thoroughly enjoyed this book and would recommend it very highly – it is a very important contribution to the history of the First World War.

Inspirational Women of World War One

The Home Front Diaries of Gabrielle West gave an interesting picture of a life and time that is past.

A Fascinating account of life on the Home
Front. The drawings she made and the details she included in her diaries and letters went far beyond superficial detail and potentially could have been considered a security risk. As a result,
this is a book that will appeal to a great many people beyond the readership of social history and human interest. Strongly Recommended.

A fascinating and important read, which I will definitely be recommending.

Especially interesting are the accounts of Zeppelin attacks and the conditions civilians had to work in. Munitions plants were filled with fumes of ether and acids that caused workers to have fits. Many of the hospital cooks were volunteers, working eleven hour days and required to fill a wide variety of special diets. The diarist had negative remarks about everyone. Her roommate was the most boring person; half the workers were silly and unreliable; one woman was so entirely pleased with herself. Women working at munitions plants were rough, rude hooligans, lacking discipline. She gave the impression she was the only sane person in England. Her diary was meant for a brother in India, not intended for public reading, but then she donated her diaries to the Imperial War Museum. I would have been leery of being friends with such a critical person.

As featured on The Diary Review!

Gabrielle was born in 1883 and lived to celebrate her 100th birthday. Her diaries were written as letters to her younger brother Michael, who worked for the Education Service in India and joined the 49th Bengal Regiment in 1918.

Gabrielle’s diary begins in June 1914 and gives us a valuable insight into life in Britain just prior to the conflict.I found this particularly interesting.

The munitions factories were targets of Zeppelin raids and Gabrielle describes some that she witnessed in great detail. She also explains the layout of the factories and what each department produced – all illustrated with diagrams and drawings which I found fascinating.

There was a brief period when Gabrielle was out of work. Her efforts to find paid employment are described in detail up to the moment when she and her friend responded to an advertisement in the women’s magazine “Home Chat” for women to join the newly formed Women’s Police Service to work at munitions factories. On 4th December 1916 Gabrielle became a woman police officer. The main concerns were the moral behaviour of the women workers. At that time, women police did not have powers to make any arrests, in spite of some very hair-raising moments involving large numbers of women workers. There is a wonderful photograph on page 127 showing Gabrielle and her fellow women police officers in their uniform, complete with tin helmets.

In 1917 the air-raids became more frequent, as did the problems with the workers in the factories, so Gabrielle and her colleagues had their work cut out to ‘keep the peace’. The diaries end in May 1918 with a description of an explosion in the munitions factory in which Gabrielle was working at the time.

Gabrielle’s Great Niece has added an Afterword that tells us that Gabrielle ran a successful tea room for a time after the war and though like so many women of that generation she never married, she had a full and happy life. Also in the book you will find photographs of Gabrielle and her co-workers.

I thoroughly enjoyed this book and would recommend it very highly to anyone interested in the history of the First World War.

Avalon trained as a nurse at Guy’s Hospital, London. As a mature student she gained a Social Policy degree at Bristol University and then trained as a midwife. She later worked for VSO (Volunteer Service Overseas) in Albania and Namibia, and for MSF (Médicins Sans Frontièrs) in Tajikistan, Afghanistan, Mexico and South Sudan. She gained an MSc in Maternal Health and spent seven years as a community midwife in Plymouth, writing in her spare time and studying creative writing under Fay Weldon. She has self-published three novels: A Midwife Abroad, All the Sky, and Rubic’s Return.