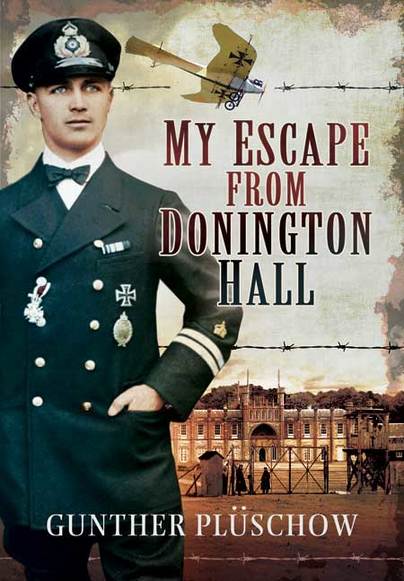 My Escape from Donington Hall (ePub)

Click here for help on how to download our eBooks
Add to Basket
Add to Wishlist
You'll be £4.99 closer to your next £10.00 credit when you purchase My Escape from Donington Hall. What's this?
Need a currency converter? Check XE.com for live rates

It was an escape from a PoW camp as daring and fraught with danger as any immortalised by Hollywood. Yet the story is less familiar than most – as it concerns the only German prisoner of war to escape from captivity in mainland Britain and make it home during either World War.

After being caught in Gibraltar during an earlier attempt to return to his homeland, Pluschow and other captured Germans were shipped to Plymouth and then on to the PoW camp at Donington Hall, where he arrived in May 1915.
On July 4 he and fellow prisoner Oskar Trefftz broke out by climbing over two 9ft barbed wire fences, before changing clothes and walking 15 miles to Derby where they caught a train to London.

By the next morning the men's escape was featured in the Daily Sketch newspaper with both names and descriptions of the pair. They went their separate ways but Trefftz was recaptured at Millwall Docks. Realising he had to alter his appearance, Pluschow removed his smart tie and handed his coat in at the cloakroom at Blackfriars station. The German then used scraped-up coal dust, boot polish and Vaseline to change his fair hair to greasy black and covered himself in soot to make him appear as a dock worker. Pluschow then stowed away on a Dutch steamer ship at Tilbury docks, talked his way past a policeman in Holland before travelling to Germany by train. Upon his return home he received a hero's welcome and was presented with the Iron Cross First Class.

This extraordinary story is told in Gunther's own words for the first time in English.

The author holds the distinction that he was the only German POW in either WWI or WWII to make a successful home run escape from the British Isles. As such, this is a unique story and he tells his tale well... A very interesting read and an ideal addition to any library of military history... The reader will find this book fascinating as a war story, but also is a comparison with the many tales of escapes by British POWs.

Gunther Plüschow was the only German Prisoner of War to successfully escape from the British mainland. He was a German aviator who was posted in China before the outbreak of war, and who was captured by the British during his attempt to return to Germany from China.

The book falls into three parts. The first looks at the author's time in the German territory of Kiao-Chow in China. This includes a section on his pre-war life in there, with some fascinating insights into the colonial mindset of the period. The main focus here is on the Japanese siege, and the author's one-man aerial war. At the very end of the siege he was ordered to fly out of Tsingtau, starting the second part of the book....

...This is a classic POW escape story, with the added bonus of being told from the German point of view. In many ways Plüschow's story is very similar to the more familiar British tales. The only significant difference is his attitude to setbacks, which he tends to treat with indignation, not a common reaction in British accounts.