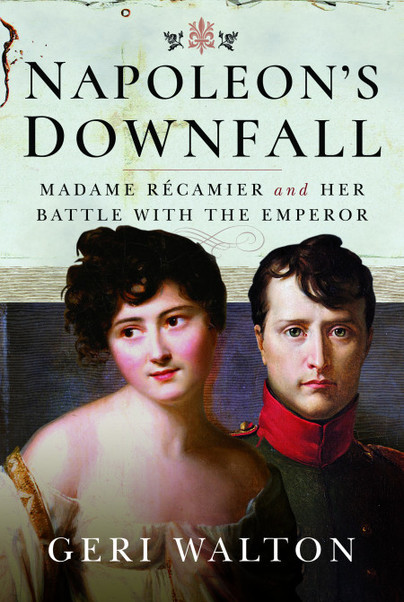 Madame Récamier and Her Battle with the Emperor

Add to Basket
Add to Wishlist
You'll be £11.99 closer to your next £10.00 credit when you purchase Napoleon’s Downfall. What's this?
+£4.50 UK Delivery or free UK delivery if order is over £35
(click here for international delivery rates)

Napoleon Bonaparte and Juliette Récamier were both highly influential and well-known in France, yet they were often at odds with each other. Their story played out on the European stage during a period of political upheaval and new political ideas. Napoleon gained power in the aftermath of the French Revolution, and he would go from spectacular victories to dismal failure. His defeat in the early nineteenth century would result in Europe acquiring new national borders and with that Britain, Russia, and the United States would gain greater international influence.

Juliette, on the other hand, wielded her own power. Because of the tumultuous French Revolution, noble and aristocratic landowners were being replaced by a new wealthy class in the private sector. Juliette and her husband were among the beneficiaries of this growing affluence and influence, and her power came from her new-found position in society.

Juliette also viewed life differently than Napoleon. She saw life from the standpoint of a wealthy socialite whereas Napoleon’s desires were always shaded by his military experiences and his meteoric rise to power.

Along the way, Juliette would have to face the testy Emperor, and she would find that his own brother would fall for her. Even some of Napoleon’s greatest enemies would woo her.

I thoroughly enjoyed reading this, I love history books and I really didn't know much about Napoleon and the time period. It was well done and well researched.

A fascinating look at two of the French Revolution's most amazing and engaging characters, Napoleon Bonaparte and Julette Recamier, both of whom wielded enormous power in a most turbulent time. Geri's book tells their separate but dovetailing stories...

A book that introduces us to an atmosphere of neoclassical beauty, with an extremely exciting figure to rediscover.