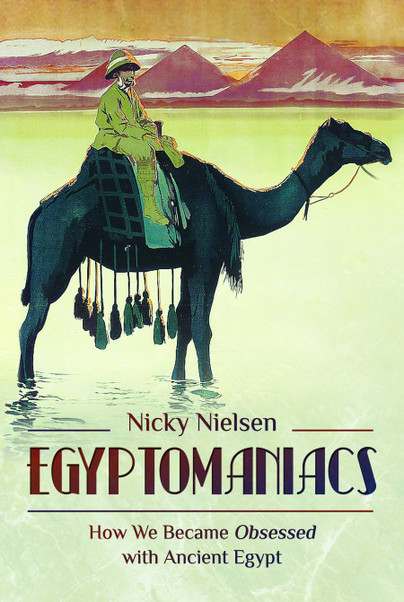 How We Became Obsessed with Ancient Egypt

Preorder
You'll be £15.00 closer to your next £10.00 credit when you purchase Egyptomaniacs. What's this?
+£4 UK Delivery or free UK delivery if order is over £30
(click here for international delivery rates)

The Greek historian Hecataeus of Abdera declared during the 4th century BCE that the Egyptian civilization was unsurpassed in the arts and in good governance, surpassing even that of the Greeks. During the Renaissance, several ecclesiastical nobles, including the Borgia Pope Alexander VI claimed their descent from the Egyptian god Osiris. In the 1920s, the discovery of Tutankhamun’s tomb in the Valley of the Kings prompted one of the first true media frenzies in history. For thousands of years, the Pharaonic culture has been a source of almost endless fascination and obsession. But to what extent is the popular view of ancient Egypt at all accurate? In Egyptomaniacs: How We Became Obsessed With Ancient Egypt, Egyptologist Dr Nicky Nielsen examines the popular view of Egypt as an exotic, esoteric, mystical culture obsessed with death and overflowing with mummies and pyramids. The book traces our obsession with ancient Egypt throughout history and methodically investigates, explains and strips away some of the most popular misconceptions about the Pharaohs and their civilization.

I've always been interested in the history of archaeology, so it seemed likely that Egyptomaniacs would be an ideal non-fiction book for me and I'm glad to say that turned out to be the case.

It's all about Egypt, as the title suggests, looking at how Egypt has been perceived by a wide variety of historians through from ancient times to the modern day, as well as how it has been portrayed in the media (focussing on either Cleopatra or rampaging mummies, for the most part). It finishes off with a look at why there is currently so much interest in the role of aliens as the builders of the pyramids, not to mention a few other issues around who created ancient artefacts and where they should end up when found.

It's an enjoyable read, well-paced and full of interest without being dry. I'd consider myself fairly well-read but there were definitely things I didn't know about before and I hope the author gets a chance to write more books in this line.

I really enjoyed this book. I felt that Dr Nielsen gave wonderful walk through the history of the wests obsession with ancient Egypt. Looking at the Egyptian culture as the ultimate "other" also shined light on how the west also looks at cultures and picks and chooses what it wants to believe. The book was an easy and fun read and not too overly scholarly for the casual historian like myself.

To summarize, Nielsen has written a fascinating, well-written and rigorously researched book on Western reception of Ancient Egypt. He traces the complex history of our fascination with a culture that has made us dream and fantasize for millennia. Each chapter deals with a different topic, from Ancient Greece and Rome, on to the Middle Ages, followed by the 17th-19th century and ending with 20th and 21st centuries. From representations in literature, art and popular media to the political significance of monuments during colonialism, fascism and slavery up until “modern” conspiracy theories of aliens. In doing so, he clearly shows how some tropes have survived time and again and how current views of Ancient Egypt, be it from museological display and interpretation to conspiracy theories, are based on a long tradition of Orientalist, Eurocentric interpretation.
It is a phenomenal book with lots of information, yet incredibly well-written and accessible. It was honestly a joy to read because it was engaging, fun, critical, well-researched and witty. Nielsen states things very clearly and doesn’t shy away from naming things for what they are but also includes funny remarks and light humor that makes his reading not only more enjoyable but also breaks the sometimes-exhausting barrage of racist ideas.
I learned a lot reading it because despite the fact that I had analysed my own reasons for why I loved Ancient Egypt on my own (and also critically examined the colonialist and Orientalist aspect), Nielsen gave me historical context needed to fully understand the scope and impact. I have learned a lot and was thoroughly entertained.

I highly recommend this book to anyone who is interested in culture and especially in Ancient Egypt. It’s a marvelous book and it deserves all the attention.

Egyptomaniacs is an in-depth analysis of Ancient Egypt, both it's discovery and the subsequent media frenzy and perceived mythology in the wake of said discovery. The author, Dr. Nicky Nielsen, is an accomplished lecturer in Egyptology at the University of Manchester and has published numerous works of academic research in this field. The author breaks the book down into two larger sections: one focusing on the ways in which Egypt has been studied from the Classical period to the Napoleonic Era. Also featured is the rise of the Egyptian tourism industry and an in-depth analysis of the ways in which fascist and nationalist regimes have used Egyptian symbolism and culture for their own devices. The second portion of the books explores the ways that popular mythology about Egyptian culture have formed and propagated through the collective psyche. The author writes at length about how ancient Egypt has been portrayed in popular culture, including several interesting pseudoscience theories about aliens.

As a reader, I loved the Egypt that I saw in movies as a child. I remember picking up an Eyewitness book on Egypt at my local library. This book has re-shaped and re-formed my ideas about Egypt. Of course, as I am now an adult, I understand that the Egypt I saw in popular culture was something that had been embellished and hyperbolized through the filter of mass media. This is a must-read for anyone who has an affinity for the ancient Egypt as depicted in pop culture. Not only is it a fantastic, well-written exploration of our obsession with Egypt, it is also a striking critique of pop culture through time. The author's analysis of the human obsession with an ancient culture can be applied to any subject that has been run through the mass media filter. As a Texan, I understand that the Alamo is a symbol of hope for many, but it is also a mythologized point in our history that was not as glamorous as the movies make it out to be.

Overall, I enjoyed the pacing and structure of this book as a nonfiction monograph. I felt the writing style was conversational and easy to read, even for someone who is not prone to academic reading. I would recommend this to anyone who is interested in the topic it presents.

As someone who has loved Egypt since childhood, this book sparked intense interest. It did not disappoint. The details in the book create why we love ancient Egypt and how its mystery makes it one of the greatest stories in history.

The book is pithy, with a light tone, but a serious intent. It pulls no punches and suffers no fools, and I love that kind of writing!... I loved this book and I commend it unreservedly

Dr Nicky Nielsen is a Lecturer in Egyptology at the University of Manchester and has published extensively both in peer-reviewed journals such as Journal of Egyptian Archaeology and Antiquity as well as Egyptology magazines including Papyrus, Nile Magazine and Ancient Egypt Magazine. He is the author of Pharaoh Seti I: Father of Egyptian Greatness (Pen & Sword, 2018) and is a regular contributor to The Conversation. He has on several occasions been accused of being part of a cover up to conceal the alien origins of the pyramids. He is not.