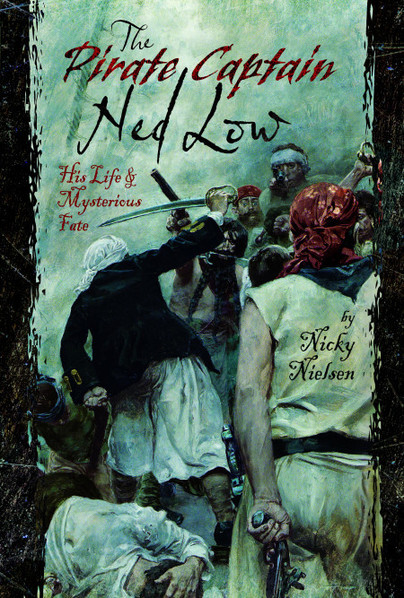 His Life and Mysterious Fate

Preorder
Add to Wishlist
You'll be £14.00 closer to your next £10.00 credit when you purchase The Pirate Captain Ned Low. What's this?
+£4.50 UK Delivery or free UK delivery if order is over £35
(click here for international delivery rates)

Edward ‘Ned’ Low’s career in piracy began with a single gunshot. While working on a logging ship in the Bay of Honduras the quick-tempered Ned was provoked by the ship’s captain. He responded by grabbing a musket and inciting a mutiny. Then the London-born sailor and a dozen of his crewmates held a council, stitched a black flag and voted to make war against the whole world preying on ships from any nation, flying any flag. Low’s name became synonymous with brutality and torture during the 1720s as he cut a swathe of destruction from the shores of Nova Scotia to the Azores, the coast of Africa and throughout the Caribbean. Ned Low’s life was one of failed redemption: a thief from childhood who briefly rose in the world after moving to America, only to fall again lower and harder than before. He was feared even by his own crew, and during his life on the wrong side of the law he became infamous for his extreme violence, fatalistic behaviour, and became perhaps one of the best examples of why pirates were classed in Admiralty Law as hostis humani generis: the common enemies of all mankind.

We don't know what Ned Low looked like. While we know his wife dying leads him to abandon his daughter and live life at sea, the unpredictable rages he is prone to are not defined. This is an instance where he was too successful of a pirate. By not getting captured, he never is forced to tell his own tale. He fades away with every excuse for his actions unknown. Was he truly as horrible as everyone made him out to be? We may never know. This book is the closest we will get right now to discover the man as he was known then. Clearly, I would consider this a great resource on the facts alone gathered. Would I put this proudly on my shelf of other Pirate-related books? Absolutely. I'm hoping Nielsen, who primarily publishes Egypt-related works, does another.

I have often struggled to find nonfiction books about pirates that fall in that sweet spot between academic and entertaining. Either the research seems suspect on a very readable book, or the content is so dry I can barely focus on what I'm reading. This book about a relatively unknown pirate Ned Low hits the mark of being fascinating and accurate at the same time. The author gives an excellent explanation of maritime life, not just aboard pirate ships, and reveals the fascinating life of a man I had never heard anything about. The information is readable while not being boring and the author was skillful at weaving in other parts of history from that time period without seeming like he was going down rabbit trails. Following the exploits of Ned Low and sprinkled with titillating stories of other facets of the naval world, I found myself reading this book incredibly quickly as if it were a novel I needed to find out the end of. I was highly impressed by the nonfiction writing and felt I walked away understanding pirate culture far more than I did before reading this book.