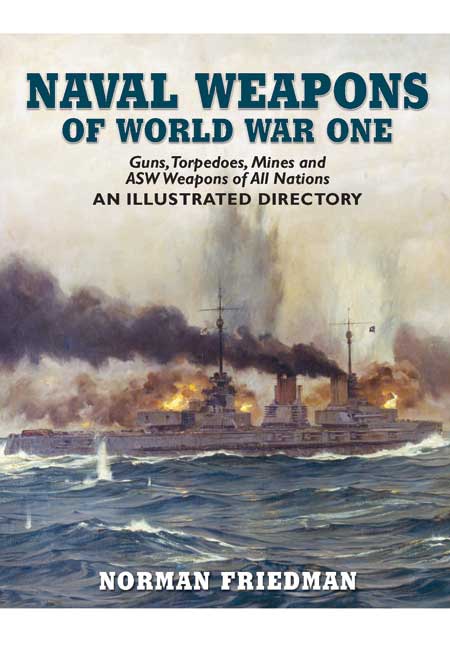 Click here for help on how to download our eBooks
Add to Basket
Add to Wishlist
You'll be £25.00 closer to your next £10.00 credit when you purchase Naval Weapons of World War One. What's this?
Need a currency converter? Check XE.com for live rates

Although the Great War might be regarded as the heyday of the big-gun at sea, it also saw the maturing of underwater weapons – the mine and torpedo – as well as the first signs of the future potency of air power. Between 1914 and 1918 weapons development was both rapid and complex, so this book has two functions: on the one hand it details all the guns, torpedoes, mines, aerial bombs and anti-submarine systems employed during that period; but it also seeks to explain the background to their evolution – how the weapons were perceived at the time and how they were actually used. This involves a discussion of tactics and emphasises the key 'enabling' technology of fire control and gun mountings. In this respect the book treats the war as a transition from naval weapons which were essentially experimental at its outbreak to a state where they pointed directly to what would be used in World War Two.

Based largely on original research, this sophisticated book is more than a catalogue of the weapons, offering insight into some of the most important technical and operational factors influencing the war at sea. In this respect it is more broadly significant than its title might suggest.

A spectacular work both for the visual content and for the analysed paper.

This beautiful, technical book details all the equipment mentioned in the title.

For a large format book with a large number of first rate images in illustration, this book is priced very competitively. It has to be the master work on the subject, well-written and packed with information on weapons from a period when revolutionary new weapons were entering service to deal with revolutionary threats. Very Highly Recommended.

No-one interested in British naval gunnery can afford to miss this...This book is a most useful, indeed a vitally important contribution to the naval literature of the First World War. There is key material in it that is not available elsewhere and it rewards careful reading...A worthy successor to Campbell's magnum opus.

Friedman’s book breaks this mould [researchers focussing on the period leading up to the outbreak of war] wide open.’
‘Comprehensive coverage’

Friedman’s book breaks this mould [researchers focussing on the period leading up to the outbreak of war] wide open.
Comprehensive coverage.

When I first opened it, I had intended to read just sufficient to enable me to write a fair and detailed review; I ended up reading most of the book. For a work purporting to be an ‘encyclopaedia’ of weapons systems, this is a praise indeed.

This is a ‘must have’ book for the WW1/ WWII naval scholar, the model ship builder, and those who are interested in naval artillery weaponry. The book is filled with photos and mechanical drawings which show a cross section of the huge guns and gun turrets on battleships and destroyers.

The 408 page book is divided into four sections – guns, torpedoes, mines, and ASW weapons – with each section covering those weapons on a country – by – country basis. It describes how the weapons evolved and how they were used, includes a wealth of technical detail, drawings, and photographs, and gives an insight into what influenced the war at sea.

This is a superb piece of work, and an invaluable addition to the library of anyone interested in naval warfare during the First World War.

An absolute must for anyone with a serious interest in naval warfare.
A first class work. 10/10

An absolute must for anyone with a serious interest in naval warfare, undertaking research or with just a passing curiosity in the subject. Well produced and illustrated with photographs, illustrations and plans it not only offers a comprehensive and readable catalogue of military weapons, but also offers insight into some of the most important technical and operational factors influencing in the war at sea.

Based largely on original research, this publication is much more than a catalogue of the naval weapons of the First World War. Indeed, the author offers an insight into the guns, torpedoes, mines, aerial bombs and anti-submarine systems employed during that period. Friedman also seeks to explain the background to their evolution and future development. Without doubt this is a remarkably details publication that will be of immense value to anyone with an interest in the naval war between 1914 and 1918.

Norman Friedman gives us an incredibly comprehensive view of the weapons used by the Great War navies of…ready for this? Britain, Germany, France, the United States, Italy, Russia, Japan, Austria, Spain, Sweden, and other navies. Here, naval weapons include guns, torpedoes, mines and anti-submarine weapons. There must have been a risk that main guns would overshadow mines and torpedoes.

When reviewing books by Norman Friedman it is becoming increasingly difficult t find the right superlatives which do full justice in his masterly works and this latest superb book is no exception,
Friedman does cover all weapons, the biggest section being devoted to British guns, which takes up a third of the book, over three hundred pages on guns, forty-five pages on torpedoes and forty pages on mines and ASW weapons.
He also covers the development of ammunition pointing out the strengths and weaknesses of the different ammunition used by different countries.
Friedman adds an excellent introduction to each section covering basic principles, tactics, development and construction, which puts the weapons in perspective.
His clear concise summaries provide excellent analysis of the naval history of the period.