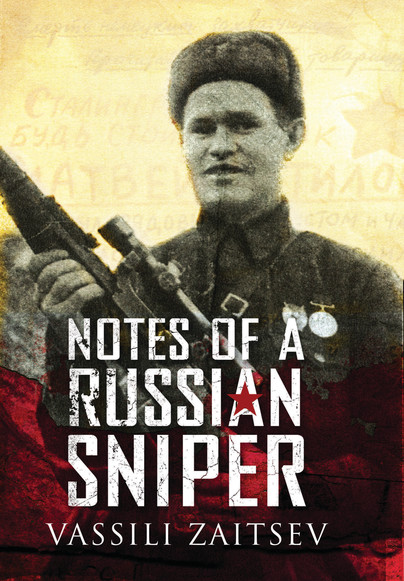 Notes of a Russian Sniper (Paperback)

Add to Basket
Add to Wishlist
You'll be £14.99 closer to your next £10.00 credit when you purchase Notes of a Russian Sniper. What's this?
+£4.50 UK Delivery or free UK delivery if order is over £40
(click here for international delivery rates)

‘As a sniper, I’ve killed more than a few Nazis. I have a passion for observing enemy behaviour. You watch a Nazi officer come out of a bunker, acting all high and mighty, ordering his soldiers every which way, and putting on an air of authority. The officer hasn’t got the slightest idea that he only has seconds to live.’

Vassili Zaitsev’s account of the hell that was Stalingrad is moving and harrowing. This was a battle to the death – fighting street by street, brick by brick, living like rats in a desperate struggle to survive. Here, the rules of war were discarded and a psychological war was being waged. In this environment, the sniper was king – an unseen enemy who frayed the nerves of brutalised soldiers.

Zaitsev volunteered to fight at Stalingrad in 1942. His superiors recognized quickly his talent, and made him a sniper. He adapted his hunting skills to the ruins of the city, watching his prey with nerves of steel. In his first 10 days, Zaitsev killed 40 Germans. He achieved at least 225 kills and the tactics he developed are still being studied.

Zaitsev was used a symbol of Russian resistance against the Nazis. His exploits, including a famous ‘duel’ with a Nazi sniper, remain the stuff of legend. His account is absorbing to anyone interested in World War II and seeing how one person could survive in the most extreme of conditions.

It is a great, first hand account of the house to house, factory to factory, close quarters fighting of Stalingrad and the role of the sniper in that fierce and bloody conflict. Vassili goes into detail about sniper tactics and how he learned his art through the rubble and twisted metal of a devastated city. If you are modelling or gaming any part of the Stalingrad period this would be a good book for you for inspiration and information. You get a very real impression of how the fighting occurred and what sort of engagements were fought. Snipers had a crucial role in the city and could swing a battle in their favour.

I think i will have to search out the movie now and watch it again after reading this. Overall an excellent read and one you can certainly whizz through in a few days.

The bitter and costly battle for Stalingrad is one of the epics of World War Two, or the Great Patriotic War, and enduring myths and stories of the Russian snipers have captured imagination.
This is an account by one of the most famous snipers who was there, much recommended.

All in all this is a great read as Zaitsev is a proficient writer. This is one of the really good WWII-memoirs by common soldiers I've read and if you are interested in Stalingrad or snipers this is a book to consider. A wargamer will get useful knowledge about snipers and sniping, descriptions about the terrain in Stalingrad, and there are some small-unit actions that could be interesting to build scenarios around, especially a fight where a small group of snipers effectively stopped a German advance.

A good book worth reading.