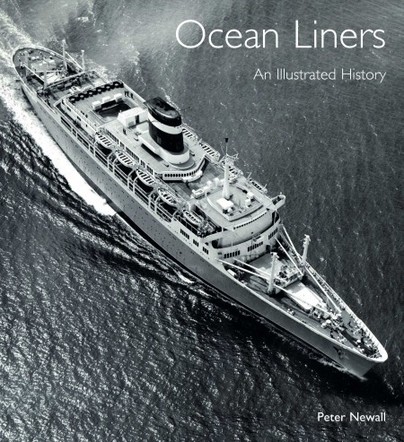 Click here for help on how to download our eBooks
Add to Basket
Add to Wishlist
You'll be £12.00 closer to your next £10.00 credit when you purchase Ocean Liners. What's this?
Need a currency converter? Check XE.com for live rates

The growth of the ocean liner was driven not only by political and social changes, and developments in marine technology and design but also by increased competition as new companies were established to meet the demands of travellers. Most liner books tend to be focussed on the transatlantic routes whereas the main aim of this book is to tell the story of the whole global development of the ocean liner. The means that not only are the well-known vessels featured but also many lesser known routes and ships. The story starts in the nineteenth century with the greatest migration ever seen. Communications around the world were also rapidly improving with the introduction of railways, the opening of the Suez Canal, a universal postal system and, most importantly, the laying of undersea telegraph cables. Tourism as we know it took off in the 1870s and 1880s. This was also a time of colonial expansion which would see Britain and other countries establishing empires around the world. To meet the demand, passenger ships became increasingly important with great advances being made not only in ship design but also marine engineering. These technological innovations soon included the introduction not only of the turbine but also diesel engines. Ocean liners also became statements of national pride and artistic achievements. The story concludes in the 1960s when, despite increasing numbers of travellers choosing to fly rather than travel by sea, a final flurry of liners were built, many of which had shorter lives than planned. The unique text is supported by over 250 carefully chosen photographs, many of which have never been seen before. A truly unique and evocative book for merchant ship enthusiasts and historians.

Employing more than 250 stunning photographs, the author describes not just the ships and routes, but interweaves the technical and design developments, covering engines, electric light, navigation and safety, and accommodation. A truly unique and evocative book for merchant ship enthusiasts and historians.

Together it all makes for an entertaining read, one that serves well as a coffee-table book or a handsome gift for an admirer of these majestic craft from a bygone era.

There are some really splendid photographs, all monochrome which suits the subject matter perfectly and helps retain the atmosphere of this long period of maritime development.

An interesting book for all audiences.

This is a ‘Beautiful’ book; the images being a pleasure to look at.

The impressive interiors and exteriors of passenger liners in their 20th Century heyday lend themselves well to coffee table books. However, Seaforth Publishing's new title Ocean Liners delivers much more than pretty pictures.
Author Peter Newall has researched the subject well, and the selection of photographs is first-class, enhanced by excellent production standards.

Most liner books focus on the transatlantic routes, however in this new book, author Peter Newall, one of the world’s leading passenger shipping experts, tells the story of the liner over all the world’s oceans, from the humble paddle steamers to the beautiful streamlined passenger ships of the latter half of the twentieth century. Not only are the well known liners featured, so too are many of the lesser known ships and routes, often surviving only as a memory but brought back to life here with more than 250 evocative photographs, some never seen before.

Enjoy this master work like a fine wine or a frothy cappuccino — sip and savor its magnificently illustrated pages at a leisurely pace, for, all too soon, like its subject matter, it reaches a glorious peak and comes to a sudden and decisive end.

During his lifetime Peter Newall became recognised as one of the world’s leading passenger shipping experts. After a successful career at British Airways he became a full time cruise journalist, lecturer and shipping historian. He wrote hundreds of articles and nine highly acclaimed maritime history books including the definitive fleet histories of Cunard, Orient and Union-Castle Lines. He acquired an superb collection of historic merchant shipping images from which this book was illustrated. He died in 2018.