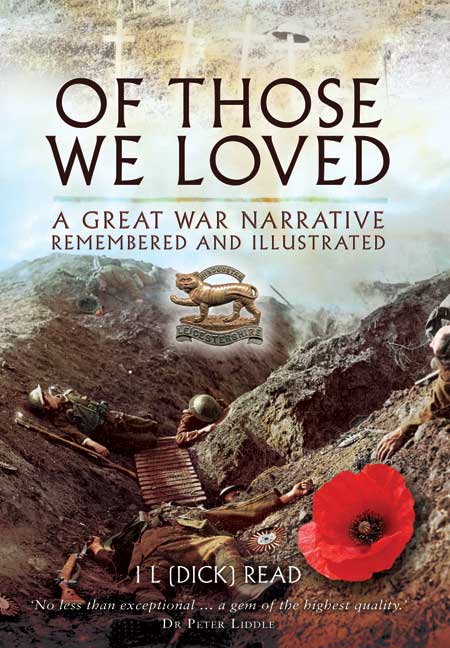 Of Those We Loved (ePub)

A Narrative 1914-1919 Remembered and Illustrated

Click here for help on how to download our eBooks
Add to Basket
Add to Wishlist
You'll be £4.99 closer to your next £10.00 credit when you purchase Of Those We Loved. What's this?
Need a currency converter? Check XE.com for live rates

The Author was among the first to respond to Kitchener's call for volunteers in 1914. He joined 8th Battalion, The Leicestershire Regiment at the outbreak of war as a Private and, within weeks, he and the Battalion were heading for Northern France with the British Expeditionary Force.

In this superb memoir we see how the spirit of adventurous patriotism that carried him to war gradually turns to sober reflection as the fighting intensifies and he loses so many friends and comrades at the Battles of the Somme and the Marne.

In 1917 he is commissioned into the Royal Sussex Regiment and makes a long, hazardous journey to Egypt to join his new battalion only to be recalled to take part in the Second Battle of the Marne, where his leadership and bravery win him the Croix de Guerre. Written with great modesty and insight, Dick Read's account contains a wealth of graphic descriptions of his experiences over the whole period of The Great War including the Somme 1916, Hindenburg Line, Egypt, Flanders and the Final Advance. The book is further enhanced by the inclusion of excellent drawings by the Author himself.

Many memoirs will be published to commemorate the Centenary of 'the War to end all Wars' but it can be said with confidence that Of Those We Loved is unlikely to be bettered. It makes for gripping reading both at home and as a companion on
any visit to the Battlefields. Refined over the years, but retaining a rare sense of authenticity, this is a moving personal record of a survivor's war and a profoundly moving epitaph for a lost generation.

This is one of the best military memoirs on any topic I have read, let alone the Great War. Read gives us a detailed at atmospheric account of his life during the Great War, taking us from the western front to Egypt, from leave in England to the periods of relief behind the line, and through a whole range of battles. If you want to try and understand the life of the British soldier during the First World War this is an excellent place to start.

This is an extraordinary book, a completely gripping account of one infantryman's service throughout the First World War, written in the 1960's for his grandchildren and illustrated by the author with lovely, graphic line drawings and sketch maps.

Despite the lapse of fifty years, Read tells his story in the most detailed and vivid manner, almost as though he was sitting by the fire, talking to you. He is unassuming and matter-of-fact about the horrors that he and his mates endured, but the overwhelming impression is of the courage, robustness and resolve with which they addressed every challenge and overcame every difficulty. Truly they were remarkable men. Do read this account of their war.

One easily becomes a part of the events and to those of us who only know the written and spoken past, this gem describes the war better than most of the other memoirs that I know.

Pen and Sword should be congratulated for making this sterling account available more widely. This is an excellent example of the type of narrative written to illuminate events for those not there. It is full of telling details on the mechanics of the day to day life of a soldier, and later a junior officer, in the course of the way. It is a rich account; the mapping – done by the author – is superb; and it deserves its tag from the dust jacket “a gem of the high quality”.

Born in 1895 Dick Read joined and fought with the Leicestershire Regiment before being commissioned into the Royal Sussex. He maintained strong Leicestershire links and was re-commissioned for the Second World War. He died in 1971. His Grandson Tim Read lives at Fleet, Hampshire.