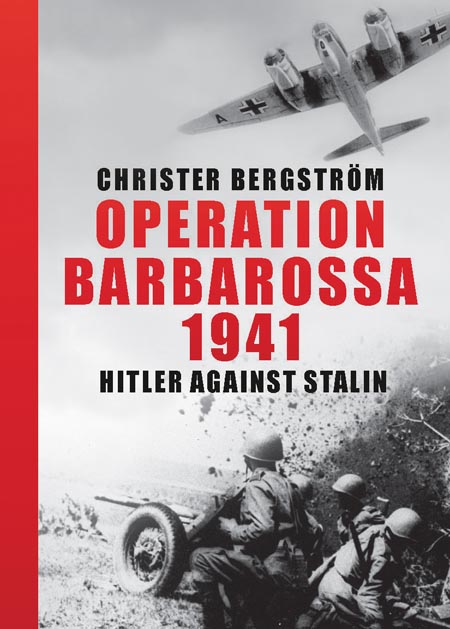 Add to Basket
Add to Wishlist
You'll be £35.00 closer to your next £10.00 credit when you purchase Operation Barbarossa 1941. What's this?
+£4.50 UK Delivery or free UK delivery if order is over £35
(click here for international delivery rates)

Operation Barbarossa was the largest military campaign in history. Springing from Hitler’s fanatical desire to conquer the Soviet territories, defeat Bolshevism and create ‘Lebensraum’ for the German people, it pitted two diametrically opposed armed forces against one another.

The invasion began with 4.5 million troops attacking 2.3 million defenders. On one side was the Wehrmacht, without any doubt the world’s most advanced military force. On the other were the Soviet armed forces, downtrodden, humiliated, decapitated and terrorized by an autocratic and crude dictator with no military education whatsoever.

Based on decades of research work in both German and Russian archives, as well as interviews with a large number of key figures and veterans, Operation Barbarossa brings our knowledge on the war on the Eastern Front several big steps forward. It reveals and dispels many myths and misconceptions including: the myth of mass surrenders by Soviet soldiers; the myth about the vast differences in troop casualties between the two sides; the myth of the Soviet partisans and the myth that it was the Arctic cold that halted the German offensive. It also does not shy away from difficult truths such as the true nature of Finland’s participation in Operation Barbarossa, and the massive scale of rapes committed by German troops.

Illustrated with over 250 photos, many never previously published, and several clear and detailed maps, this is an objective, balanced account, published in time for the 75th anniversary of the start of Operation Barbarossa on 22nd June 2016. Christer Bergström has once again produced what will be the definitive account of this monumental campaign.

”Even readers with a great knowledge on the subject will have much to learn from this book. Bergström presents several totally new aspects. For anyone who wants to understand Operation Barbarossa from the perspective of both sides, this is a must-have book.”

Christer Bergström has published 23 books on World War II. He specialises on World War Two and in the past has focussed on the Eastern Front. Previous bestsellers "The Ardennes" and "Battle of Britain" sold over 3,000 copies within six months.