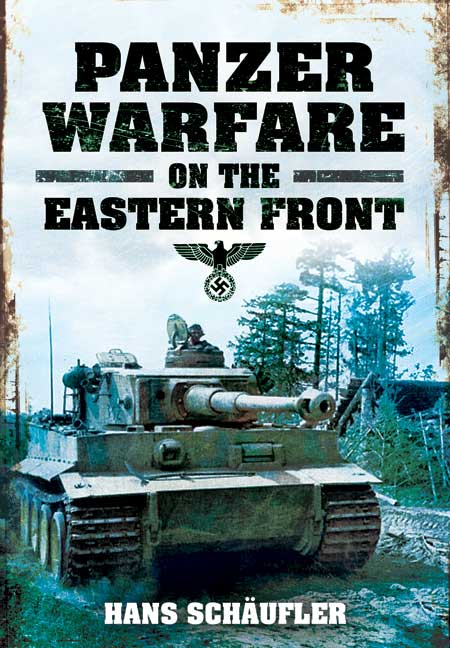 Add to Basket
Add to Wishlist
You'll be £25.00 closer to your next £10.00 credit when you purchase Panzer Warfare on the Eastern Front. What's this?
+£4.50 UK Delivery or free UK delivery if order is over £35
(click here for international delivery rates)

From Barbarossa to Stalingrad, from Kursk to Kurland, panzers formed the backbone of the German forces that attempted to defeat the Soviet Union between June 1941 and May 1945. Written by tank veterans who survived the Eastern Front, Panzer Warfare on the Eastern Front provides a firsthand look at armoured combat in that epic theater of World War II.

All the major panzer operations and campaigns are covered in the words of men from the 4th, 9th, 11th, 16th, and 18th Panzer Divisions: Operation Barbarossa, the opening invasion of the Soviet Union; the second offensive of 1942, culminating in Stalingrad; the massive armour battle at Kursk in the summer of 1943; the disastrous disintegration of the front in 1944, when entire units were decimated by tides of Soviet tanks; and the bitter, chaotic fighting as the war ended in 1945.

With from-the-turret immediacy, the accounts compiled here capture what it was like to fight in a panzer on the Eastern Front, where whole crews could be wiped out by a single enemy shell, where enemy tanks could lurk just beyond the tree line, where muzzles could flash and thunder in the calmest nights.

One veteran remembers his commander's final words before launching a desperate attack: “Write your wills, comrades!” Another describes how an officer played an organ in a bombed-out church--a jarring but peaceful moment amidst the carnage of war. Others recount acts of compassion and humanity, such as food provided by Russian peasants and a Soviet soldier who refused to fire. All of them convey the heady joy of victory and the fear and anguish of stalemate and then defeat.
These are war stories with a powerful punch.

My first impression of this title was that it was rather misleading as the first few chapters weren’t strictly related to the Panzer divisions in Russia, but more focused on the communications and command structure instead of the actual tanks and the men that fought in them.

However, the deeper you delve; the more you understand the author is actually attempting to order together the numerous personal accounts that largely make up this work, into some form of loose chronological and technical order.

What can’t be disputed is that this book is filled with uncompromising directly translated first-hand accounts of the often disturbing combat that occurred right across the eastern front. From the early successes of the 1941 Barbarossa campaign to the last ditched fuel-less and exhausted ammunition supply battles of 1945.

With each personal account one forms a clear picture of just how expert the German forces really were at Panzer warfare, both in terms of out gunning and out manoeuvring their foe with individuals time and again proving their superior nerve and battlefield experience, whilst reacting to often desperate situations against overwhelming odds and an enemy with seemingly endless supplies.

I would highly recommend this work as a critical testament to the drama, farce and terror faced and overcome by soldiers of any nation but, in this particular case, Germany.

This title looks at Panzer Warfare on the Eastern Front from the point of view of the German Panzer crews facing the might of the Soviet Army on the harsh Eastern Front. Using the words and accounts from the panzer crews themselves, the author offers an intimate portrait of what it was like to be participating in tank warfare at the height of World War Two.

All of the majour operations are covered within the book, it offers a fascinating insight into the would of the panzer crew during the war, which will no doubt seem to be a popular subject with historians and its sure to appeal to those with a general interest in German tank warfare too.

Of the billions of worlds written about every aspect of World War Two, the thousands of kilometres of film, it seems hard to images any new book is going to present a unique insight. This book has achieved that. Hans Schaufler has collected together a fascinating selection of first-hand German accounts of panzer warfare on the Eastern Front as Germany swung from seemingly endless triumphs to stalemate and then the relentless retreats and crushing defeat.
The text is well-written and supported by a large number of photographs that have been reproduced through the text in single colour.