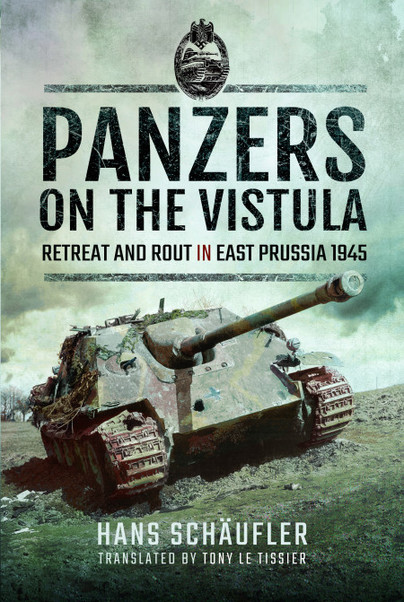 Panzers on the Vistula (Hardback)

Retreat and Rout in East Prussia 1945

Add to Basket
Add to Wishlist
You'll be £19.99 closer to your next £10.00 credit when you purchase Panzers on the Vistula. What's this?
+£4.50 UK Delivery or free UK delivery if order is over £35
(click here for international delivery rates)

Hans Schäufler fought as the commander of a Jagdpanther tank destroyer in rearguard actions against the Red Army in East Prussia in 1945. Then, as an infantryman, he took part in the doomed defence of Danzig and made a daring escape across the Baltic in a small boat. This is his story, and it is the story of tens of thousands of soldiers and civilians who were caught up in the chaos and tragedy of the German retreat. His eyewitness account is one of the most revealing records we have of the experience of the collapse of the Third Reich in the east.

As well as giving a vivid insight into the German army’s tactics as they fell back before the Soviet advance, he describes the appalling conditions and the fear and panic that gripped the city. Acute shortages of men, equipment, ammunition and fuel crippled the defence, but extraordinary resilience, heroism and ingenuity still motivated the soldiers who were fighting for a lost cause and facing certain defeat.

Overall a very interesting and engaging read. This is a tactical, street level perspective on the closing days of the war and its immediate aftermath... the author presents a passionate and insightful account of his and his comrades’ experiences.

The writing is clear, well translated from the original German, and quite engaging.

Hans Schäufler was a second lieutenant in the 4th Panzer Division, and in early 1945 commanded a Jagdpanther tank destroyer before becoming an infantryman in the defence of Danzig. As a rare witness to the complete collapse of the Wehrmacht in East Prussia, his is an important story, and shows how the German soldier struggled on against an enemy whose superiority in men and equipment was by now so large that it could not be stopped. He is quite clear that no one had even the remotest illusion that a victory was still feasible, instead their purpose was to delay the Russians so that as many civilians as possible could be evacuated across the Baltic to the comparative safety of the west. The book closes with the stories of others who were taken prisoner by the Russians or were interned in Sweden, but Schäufler himself had a remarkable escape; having continued to resist until a few hours before the ceasefire came into effect, he and a few others boarded a small motor boat and, after a perilous journey, successfully reached the British sector.

This is one of the most honest accounts, that does make tough reading in places, whatever you think about enemy combatants they are still human. It is refreshing to still hear a voice from the past who is no longer with us, but he has put into words what many others felt and their fears.

An excellent book and a message from history.

This is a remarkable book which provides an authentic eye witness account of the capture of Danzig, mass evacuations from the Frische Nehrung and the desperate plight of those who actually made their escape – initially to the Hela Peninsular and then to relative safety in Northern Germany and Sweden.

There is little tactical detail, so this is perhaps not a key title for the wargamer, but it is a salutary reminder of the impact of extraordinary events affecting so many people in such a short space of time.

Hans Schäufler was a second lieutenant and signals officer in Panzer Regiment 35, part of the 4th Panzer Division, on the Eastern Front in 1945. He took part in the German retreat from Latvia to East Prussia and was trapped in Danzig when the city fell to the Red Army. After the war he wrote this dramatic account of his experiences which has been translated into English for the first time. Among his other books is the best-selling Panzer Warfare on the Eastern Front.