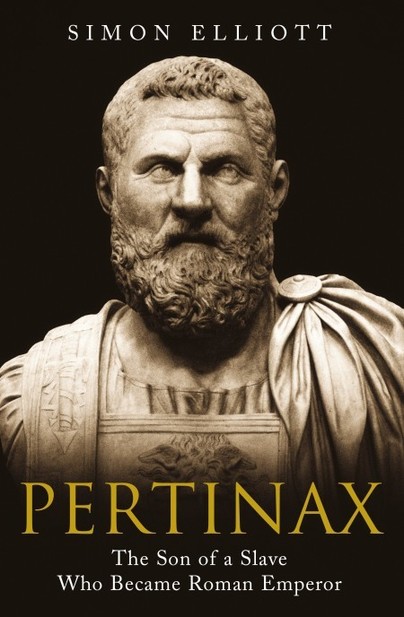 You'll be £20.00 closer to your next £10.00 credit when you purchase Pertinax. What's this?
+£4.50 UK Delivery or free UK delivery if order is over £35
(click here for international delivery rates)

I'm sure I must have heard the name "Pertinax" before seeing this book for the first time, but I couldn't have told you a single thing about him... So, I wanted to know who he was, how he became emperor, and all the other parts in between. Dr. Simon Elliott managed to answer every single question that came to mind during the course of reading. The book is written in an easy to understand way, but doesn't talk down to the reader at all. I truly feel like my knowledge of the Roman Empire has been added to... though I may need a second read to soak everything up properly!

Seldom does one hear of Pertinax who ruled for only 89 days yet in that time accomplished so much. My first introduction was shortly before a first visit to the Vatican Museum so when there kept my eyes peeled for a glimpse of a likeness of this fascinating man.

This riveting book brought his story to life and I learned far, far more than ever before. The maps and detailed timeline are excellent. I really enjoyed reading the background and life throughout the Roman Empire (not just Rome) before, during and after his rule, such as various taxes, military, agriculture, ancient wonders, etc.

Pertinax rose to power over many years of hard work and diligence and led by example by dramatically reducing personal costs. He initiated land reforms. He sold off Commodus' possessions. He initiated a complex census to determine the taxable population. All this (and much more) in three months! I wonder how much more he would have done had he lived longer.

People who are eager to learn more about the Roman Empire and its emperors will be drawn to this book. The amount of research done by Dr. Simon Elliott is staggering! My depth of knowledge of this particular rule has increased significantly.

This is a careful and well written story of an emperor who might otherwise have been simply a footnote in the history books. As the short lived (3 months) first of the emperors whose assassination marked the start of the year of the five emperors, Pertinax was a self made man who moved up through the ranks from the lowest to the highest social strata.

The book is meticulously annotated throughout. The author has cited both period and modern scholarly research to support the narrative. There are numerous chapter notes, a timeline, and an index. The bibliography notes alone will keep keen readers reading for ages. Probably the most engaging part of the book for me were the numerous photos of buildings and artifacts which give a comprehensive context for the history. It was strangely moving to see the places where Pertinax himself traveled and lived.

The author has a casual academic style of writing; accessible and careful, with proper annotation, but not overly convoluted or impenetrably difficult to read. He manages to convey a wealth of information without being pedantic or preachy. I also really enjoyed reading the historical timeline provided by the author which showed how closely Pertinax's rise to power was intertwined with place, with social development and expansion, and with the other men of influence who lived contemporaneously (and who were eventually responsible for his downfall).

Five stars. It's abundantly clear that the author has poured prodigious effort and careful academic research into this tome. I can't imagine there's much left unanswered about the history or reign of Pertinax. I feel much enlightened anyhow. Despite being a student of Latin for many years (and a product of 7+ years of formal Latin instruction) and a huge military history nerd, I had only the mildest familiarity with Pertinax (or the year of the 5 emperors).

Incredibly well researched and very accessible, rather you're well versed in Greco-Roman history, or just dipping your toes in you won't feel lost or confused.

You can tell from reading the book that Dr. Elliott but a lot of time, energy and love into the research required to write it. This book focuses on a little known subject and time period in ancient Rome, between the death of Commodus and the Severan Dynasty. Pertinax was a character I knew little about until I read this book, he certainly lived a fascinating life and rose well beyond his expected station in life. It's both incredibly interesting and highly motivational to read of Pertinax's humble beginning to where he ended up.

Dr. Elliott lays out all the facts and details in spectacular fashion, the book never seemed dry or read like a text book. Each chapter has a fantastically helpful introduction at the beginning as well as title sub-sections through out so you never fee lost or in a sea of facts and dates. All the information is broken down nicely into bite sized chunks so you never feel overwhelmed either. The author did a fantastic job of sticking to the subject and not wandering too far away from Pertinax, which is tough to do in such an interesting time period!

I highly enjoyed this book and will definitely be referring back to it often for research purposes, or just for a refresher. I have a feeling this will end up being a holiday gift for more than a couple of my friends/family.

Highly enjoyable, easy to read, and yet still a wealth of information on an often ignored individual. 5 stars!

This book was very good and interesting. It gave relevant backstory so the reader could understand what was going on and why things were important, as well as stayed as close to Pertinax as possible throughout. I really loved the breakaway point to learn about Commodus because I'm always surprised he's not as talked about of the Roman emperors, but it was a good book. I enjoyed reading it and I felt like I learned a lot!

"The son of a former slave, Pertinax was the Roman Emperor who proved that no matter how lowly your birth, you could rise to the very top through hard work, grit and determination." As much as I love reading history, I read it much less than fiction and personal development nonfiction simply because history books can be hard and slow to read. I know very little about Roman history, and still this book was a treat!

The author organized the book into easily digestible bits: with very clear introductory paragraphs at the beginning of each chapter, graphs and maps when necessary, and titled subsections within chapters that allowed for mental breaks and a clear reminder of where we were in the story.

My husband, on the other hand, is an enthusiastic lover of Greco-Roman history. My hope in reading this book was to learn something he didn't already know. This book by Dr Simon Elliott is the first book dedicated solely to the figure of Pertinax, and thankfully, I learned quite a few things my spouse didn't know! Dr Elliott lays a foundation for Pertinax's rise and gives context to each part of the story and culture, all while still keeping the book relatively short and concise.

In Dr Elliott's writing, his research and passion for the subject is apparent. He writes about the people, places, and events like he was a fly on the wall, like he knew them personally. I especially enjoyed reading his descriptions about the military, geographical locations, and the especially dramatic discourses between politicians.

I very much enjoyed learning new things and that the book was easy to read. I consider myself a voracious, quick reader, but some nonfiction history books have taken me months or years to finish. This was a very approachable and still thorough book on an obscure time in early history.

What an amazing book this is. The research and work done by the author must have taken a very long time and the level of detail is amazing. Not only does Dr Elliott look at the life of Pertinax but also so many other facets that would affect life in Rome, etc

This is a large piece of work and if you are at all interested in Roman history it is something you will keep going back too for reference.

Definitely a 5 star review from me.

Elliot’s key virtue as a writer is his clarity - information handled very efficiently: it is organised into neat units, presented directly - he likes tables and bullet points - and supported by direct references to ancient and modern sources. He makes good use of modern archaeological finds and inscriptions. This last bit is important as there are not too many written sources to work from.

Dr Simon Elliott is an archaeologist, historian and broadcaster, and a former editor at both Jane’s Defence Weekly and Flight International. He has a PhD in Classics and Archaeology from the University of Kent, where he is now an Honorary Research Fellow, and has an MA in Archaeology from UCL and an MA in War Studies from KCL.

His research has been published in History Today, RUSI Journal, Military History Monthly and British Archaeology and many other periodicals, and he is the author of six mainstream history books currently on sale or pre-sale, one a Military History Matters Book of the Year and one an Amazon number 1 best seller. Simon lectures widely to local history societies and archaeological groups. He is co-Director of the Roman villa excavation at Teston and is Trustee of the Council for british Archaeology and Trustee of museum of London Archaeology. He makes frequent appearances on TV as a Roman expert.