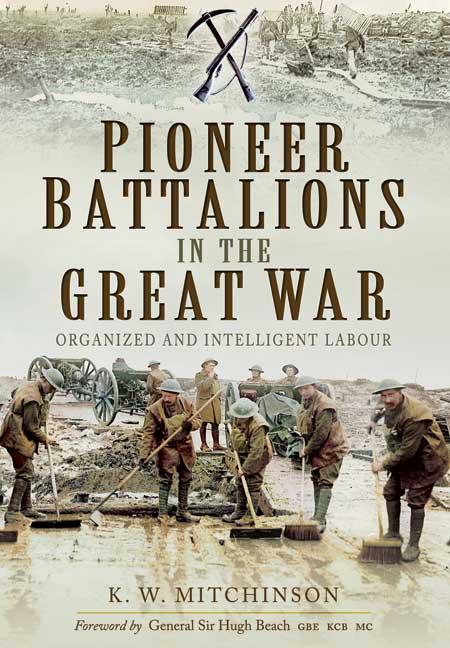 Click here for help on how to download our eBooks
Add to Basket
Add to Wishlist
You'll be £4.99 closer to your next £10.00 credit when you purchase Pioneer Battalions in the Great War. What's this?
Need a currency converter? Check XE.com for live rates

Pioneer battalions, created as an expedient in 1914, were a new concept in the British Army. Intended to provide the Royal Engineers, with skilled labour and to relieve the infantry from some of its non-combatant duties, Pioneers became the work horses of the Expedentiary Forces.

The Coldstream Guards and over three dozen Country regiments, each created at least one pioneer battalion. Several New Army battalions were raised specifically as Pioneers, while others were converted Territorials or Kitchener units formed originally as conventional infantry. Adopting a badge of a cross rifle and pick, these battalions wired, dug and reverted in all weathers and in all terrain. On many occasions they abandoned their working tools and fought alongside the infantry in repelling enemy attacks. In their efforts to stem the German offensives of 1918, several Pioneer units fought themselves to virtual annihilation.

Often confused with the Pioneer Corps of the Second World War, the work of the Pioneer battalions has been largely ignored or misunderstood. Far from being the units of the ages and inform, these sixty-eight battalions played a major role in the Allied victory.

Pioneer Battalions in the Great War traces the reasons behind the creation of these units, the work they performed and the dramatic transitions many of them had to undergo. It also examines how and why Pioneers have never received the recognition they deserve.

I started reading ‘Pioneer Battalions in the Great War’ knowing nothing of the work of these units and the impact they were to have on the battlefields of the First World War. This book has been incredibly well researched by K.W. Mitchinson, and covers the conception and formation of the first Pioneer Battalions. The author discusses how they changed and adapted as the war moved on, as well as the influence cast upon them by their Commanding Officers. Some of whom it seemed, had already formed strong ideas and opinions of what the Pioneer Battalions' should be doing regardless of the real reason why they were formed.

These Battalions' were to be ‘Kitchener's New Armies’. It was under his instruction that the Pioneer units were formed. Many of the men called upon to join the Pioneers' were from mining and railway backgrounds. The majority of men were hard workers, already skilled in the tasks they were to undertake on the battlefields of France and Belgium. One of the problems was that these units were hastily thrown together. It was rather difficult to find officers with the right experience required to lead them. Often, retired ex-soldiers and officers were drafted in to train the Pioneers'. However, many of these instructors' had skills that were rather outdated by this time in the war - to say the least.

As a result of the irregular command structure which the Pioneer units found themselves working under, it was not uncommon for them to be separated from the Battalions' they were part of. The Pioneers would often be kept behind on the front-line as the rest of the Battalion was withdrawn. Their lot was not an easy or appreciated one, with many arduous and often dangerous tasks being carried out. The Pioneers' worked hard digging trenches, mortar positions and making sure ammunition supplies and communications were maintained. Very often, any record of their efforts was omitted from the official accounts of any action.

I thoroughly enjoyed reading this book. I would not hesitate to recommend it to anyone wanting to learn more about the men who worked under horrendous conditions to provide the backbone of infrastructure that was needed to wage war. The Pioneers' worked tirelessly building and constantly repairing roads, laying railway lines and even digging deep underground to create dugouts, and of course massive explosive mines.

This fine, in-depth work dispels the myth that these were battalions of the aged and infirm and instead shows that the 68 Pioneer battalions played a major role in the Allied victory.
First class, highly commended work. 10/10

This book provides a fascinating, interesting and unusual 'take' on one of the unsung elements of the Great War. Highly recommended.

Pioneer Battalions, created as an expedient in 1914, were a new concept in the British Army. In this fascinating volume...Dr Bill Mitchinson traces the reasons behind the creation of these units, the work they performed and the dramatic transitions many of them had to undergo. It also examines how and why Pioneers have never received the recognition they deserve.

K.W. Mitchinson was born at Alton in 1951. Raised in Crawley New Town, he was educated in the comprehensive system and at Leeds University where he read History. Having taken a Masters Degree he moved to Lancashire in 1975. He is employed as a teacher by a local Education Authority. A regular walker and cyclist of the Western Front for nearly thirty years, he has published several books on social and military aspects of the Great War.