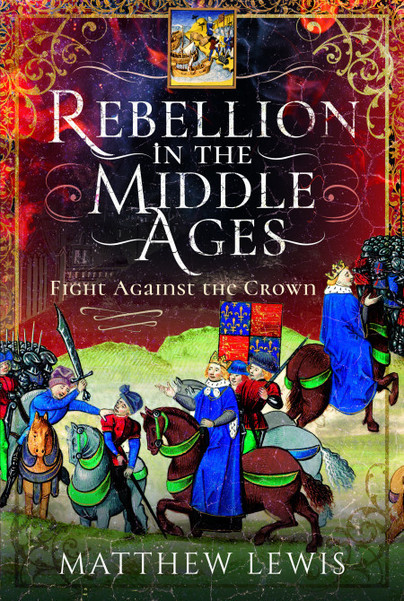 Rebellion in the Middle Ages (ePub)

Click here for help on how to download our eBooks
Add to Basket
Add to Wishlist
You'll be £4.99 closer to your next £10.00 credit when you purchase Rebellion in the Middle Ages. What's this?
Need a currency converter? Check XE.com for live rates

"This is a complex period which in lesser hands could serve to confuse more. Happily, Matt has produced an interesting and informative book, supported with a bibliography and endnotes to facilitate further reading"

Get "in the know" with the low down on all the ups and downs of the Middle Ages. Matthew Lewis has provided an excellent look inside the many different rebellions and uprisings that occurred and lays it out in an easy-to-follow format.

I have never been disappointed with Matthew Lewis's books, and this was no exception. From William the Conquerer to the Wars of the Roses, the cousins, war. and so much more - you are going to dive into a time of history that was as fascinating as it was deadly.

Get lost in history (and survive) with this exciting book.

Mr. Lewis traces the history of revolt amongst the common man of Great Britain. The Magna Carta to Wat Tylers Rebellion. Mr. Lewis tells us of the major commoner uprisings of the Middle Ages and analyzes the causes and courses of the uprisings. This is a good overall introduction to the rise of representative democracy in Great Britain.

This was a rather fascinating tale on various uprisings in the Middle Ages. As someone who reads this history as a pure hobby, it was interesting to see this topic covered. I would recommend this to anyone looking to explore this topic as well.