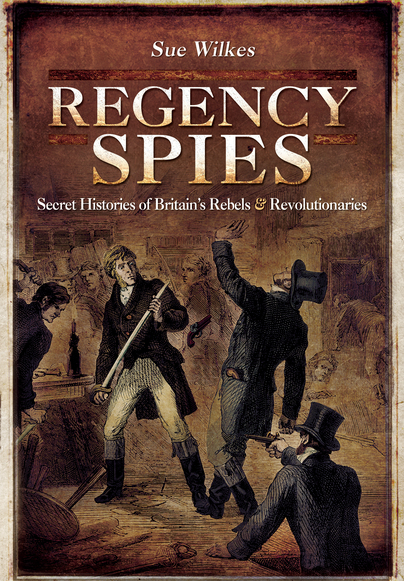 "I very much enjoyed researching my book, which involved much reading of spy reports, hunting down the desciptions of spies and their prey" - Sue Wilkes in, Writing Magazine.

You'll be £4.99 closer to your next £10.00 credit when you purchase Regency Spies. What's this?
Need a currency converter? Check XE.com for live rates

Sue Wilkes reveals the shadowy world of Britain's spies, rebels and secret societies from the late 1780s until 1820. Drawing on contemporary literature and official records, Wilkes unmasks the real conspirators and tells the tragic stories of the unwitting victims sent to the gallows.

In this 'age of Revolutions', when the French fought for liberty, Britain's upper classes feared revolution was imminent. Thomas Paine's incendiary Rights of Man called men to overthrow governments which did not safeguard their rights. Were Jacobins and Radical reformers in England and Scotland secretly plotting rebellion? Ireland, too, was a seething cauldron of unrest, its impoverished people oppressed by their Protestant masters.

Britain's governing elite could not rely on the armed services – even Royal Navy crews mutinied over brutal conditions. To keep the nation safe, a 'war chest' of secret service money funded a network of spies to uncover potential rebels amongst the underprivileged masses. It had some famous successes: dashing Colonel Despard, friend of Lord Nelson, was executed for treason. Sometimes in the deadly game of cat-and-mouse between spies and their prey, suspicion fell on the wrong men, like poets Wordsworth and Coleridge.

Even peaceful reformers risked arrest for sedition. Political meetings like Manchester's 'Peterloo' were ruthlessly suppressed, and innocent blood spilt. Repression bred resentment – and a diabolical plot was born. The stakes were incredibly high: rebels suffered the horrors of a traitor's death when found guilty. Some conspirators' secrets died with them on the scaffold...

The spy network had some famous successes, like the discoveries of the Despard plot, the Pentrich Rising and the Cato St conspiracy. It had some notable failures, too. However, sometimes the 'war on terror' descended into high farce, like the 'Spy Nozy' affair, in which poets Wordsworth and Coleridge were shadowed by a special agent.

The author is building an impressive portfolio of social history books and this is a very interesting addition to her list. The period from the 1790s to the early 1800s was a particularly dangerous period for British society. The French were a natural threat, but there were also many other revolutionary concepts developing. – Highly Recommended.

I don’t normally get an opportunity to review Regency historical non-fiction, so I jumped at the chance to do something different when the publisher got in touch.

Covering both the Georgian and Regency eras, Sue Wilkes’ Regency Spies: Secret Histories of Britain’s Rebels and Revolutionaries provides an excellent primer on British espionage during the era of privateers, Napolean and secret societies. I stress that the book also includes the Georgian era, so those hoping to read all about sexy, Byron type heroes will be disappointed. This is a fact based, and therefore unromantic, look at spies in the mid 1700-1800s.

Her writing is modern, often conversational, and avoids the dry tone of traditional academic writing. Although not exhaustive, I found the research to be well curated, entertaining, and framed in such a way that novice to intermediate interest in the subject matter will find this an excellent resource. Experts or serious academics may find the material familiar and lacking rigorous analysis, but for the average reader there is a lot to digest.

Wilkes does an excellent job in providing social, political and economic context for the intelligence activity. I was surprised at how many rebellions and skirmishes were covered, and found it to be beneficial in providing additional context to events I was aware of (and most who love the era will be too). There are also fairly well sketched descriptions of some of Britain’s most famous and active spies and movers and shakers. I like the way her discussion of these men and women humanized them, rather than sensationalized, and provided a real sense of imminent and mortal danger that was their everyday.

There are some lovely images and stories that bring history to life. The appendix also has some awesome lists that I know I will use in the future for research.

Overall, an entertaining and informative read for lovers of the era, I highly recommend Reg Readers give this non-fiction a try when in need of a deviation from the norm. Particularly those who love stories (or who are writing stories) about Georgian or Regency spies…

Secret agents have been around for centuries and in Regency Spies Sue Wilkes examines what went on between 1790 and the early 1800s. Underground political societies, riots, rebellions and treason trials are uncovered adding up to rich social history and captivating snapshot of an earlier age.

Even if solid evidence is sparse, Wilkes has done a sterling job of assembling her facts, as well as providing a bibliography for further in-depth reading about this intrigue-filled period in British history. The book is subtitled 'Secret Histories of Britain's Rebels & Revolutionaries' and it certainly provides the general reader with an intriguing insight into a little known subject.

Wilkes sets her history of British rebels in the difficult context of the aftermath of the Regency crisis of 1788-9. This refreshingly original history is attractively presented in an illustrated hardback. Well-researched and immaculately sourced, each chapter is rich in original parliamentary and home office material. Overall the book would be an asset tot he shelf of any family historian interested in the revolutionary background to the lives of their Regency ancestors in Britain.

The book is, as one would expect from an experienced historian and author, skilfully written, covering a range of cases whilst never seeming disjointed or convoluted. For those with little knowledge of the area, there is valuable background about the role of the local magistrate in recruiting spies, and a helpful appendix of who the key Regency conspirators were, when they were active, and who the politicians and magistrates were who were charged with dealing with them were.

In this fascinating account of British espionage from the 1780s to 1820s, Sue Wilkes uncovers a hidden side of our history, full of rebellions and dark conspiracies. A very thought-provoking read, it can be hard to decide who the perpetrator is - many of those condemned were fighting for justice and liberty. From mutinies in the Royal Navy to Irish oppression, Wilkes reveals all using records and literature of the time to provide an exciting read.

Some aspects of the past fade from mainstream texts. When I studied the period of British history covered by Regency Spies, it was a truism that the decades c1790-1820 were marked by popular unrest, workers' agitation and government repression of any challenge or dissent. Detail seemed scant about anything other than a few high profile incidents such as the Peterloo Massacre of 1819, and a few high profile figures such as Edmund Burke, Thomas Paine and William Cobbett.

In Regency Spies, Sue Wilkes has crafted a book that helps to combat this lack of information, whilst disentangling the varied strands of discontent that bedevilled the country. These included the fear of industrial change, high prices for grain that workers felt in their empty stomachs and Ireland's catholic populace which was governed by a repressive and protestant administration. Based on research in a range of primary sources, she breathes life into some of the lesser known people who were part of this cauldron of suspicion and savage reprisal, whether as subversives or spies. The who, why and how of more than a quarter of a century of surveillance and suspicion, particularly in the North of England spring into focus with a new clarity, along with the million dollar question, was there really a popular appetite for the radical and violent change that the politicians of the day so feared?

The activities of William Oliver and other regency spies lie two centuries in the past, but when reading about them it was hard not to note the similarities with other periods of history and the choices available to rulers and governments facing challenges. How is public safety to be secured? What is the rationale for surveillance? How should change be brought about? Is it justifiable to join an organisation under false pretences? Does the end justify the means? Are some actual or perceived threats so dangerous that normal standards must be suspended?

Regency Spies provides forgotten detail about popular protest and the workings of government in the late-eighteenth and early-nineteenth centuries. It also includes some thought-provoking examples for debating questions that are universal.

There is excellent chapter on the Luddites, which establishes why they existed, what their intentions were and the threat they were perceived to the King’s Peace in the provinces and eventually London.

'A fascinating history of plotting, intrigue and espionage is brought to life...'

In Regency Spies, Sue reveals the shadowy world of Britain's spies, rebels and secret societies from the late 1780s until 1820. Drawing on contemporary literature and official records, she unmasks the real conspirators and tells the tragic stories of the unwitting victims sent to the gallows.

Fascinating glimpses into the darker corners of Regency Britain, a period of state paranoia over the possibility of a revolution, in the manner of America or France. Although this was in many cases an over-reaction, there were undeniably real threats of armed insurrection, so the recruitment of spies to infiltrate anti-government or republican meetings became commonplace. What the authorities at the time didn't allow for, however, was that recompensing these spies led to much bogus information being reported, just for the money: something modern intelligence agencies might want to ponder. Very well-written and researched.

Sue Wilkes is an established expert on our industrial heritage and a well-known family historian. She has contributed many articles to history and family history magazines, including BBC Who Do You Think You Are?, BBC History, Discover Your Ancestors, Your Family Tree, and Jane Austen’s Regency World. Sue was recently elected as a Fellow of the Royal Historical Society.