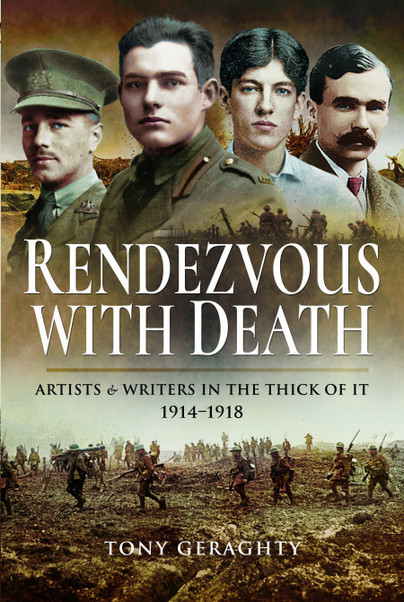 You'll be £4.99 closer to your next £10.00 credit when you purchase Rendezvous With Death. What's this?
Need a currency converter? Check XE.com for live rates

Thanks to the authors research and knowledge, the book is a very English story about the tragically short spring of English artistic creativity between 1910 and 1920; the greatest such renaissance since Shakespeare and Purcell in the 17th century. It focuses on these exceptional poets, composers and artists experiences in the front line and what resulted from these.

A short personal Preface records that the authors father, Sergeant Major Anthony Geraghty (later anglicized as Garrity) survived one year and 271 days on the front line with the British Expeditionary Force in France and Flanders including the Somme, in which he served alongside the composer Butterworth in 13th Battalion, Durham Light Infantry.

One of the many strengths of this book is that, on the one hand, it provides a summary of the experience of each of these men, but also helpful how it fitted into the wider experience of war. It is a valuable addition to the wider story of the Great War.

All in all a really enthralling book and, as he is now in his eighties, Tony Geraghty is to be congratulated.

The writing is entertaining, littered with odd facts and observations and offering a different and interesting take on the Western Front experience.

A highly readable book that looks at the First World War from an unusual perspective.

So what does this book reveal about these exceptional talents? Firstly,one is struck by the variety of backgrounds and motivations. Whilst many were inspired by romantic ideals of war and death, the life experiences that took them into the trenches were many and varied.
Secondly, in examining the circumstances in which they served and, in some cases - were killed, one is struck by the randomness and the
brutality. Clearly bullets, bombs and bayonets did not discriminate between those who had exceptional talent and those who did not.
Finally, creative output aside, this reviewer was given cause to reflect that, in other aspects, these are twelve individual stories just like the stories of the other 5.6 million service personnel who served with the British forces in the First World war – each forged by a common experience but every one unique.

Tony Geraghty is author of the bestselling history of the Special Air Service Regiment, Who Dares Wins. A blitz kid during the Second World War, he was buried by a V1 flying bomb. Conscripted into the army, he saw active service with 16th Independent Parachute Brigade in Egypt, and became a sergeant.

As The Sunday Times chief reporter and defence correspondent, he covered conflicts such as Northern Ireland, the Biafran War and in the Middle East. In 1981 he joined the Royal Air Force Volunteer Reserve and saw active service during the First Gulf War, with RAF Nimrods on intelligence-gathering missions. He holds the United States medal for Meritorious Military Services and the UK Gulf Medal.